If you play good cricket, a lot of bad things get hidden.

The last things Dornas saw from the top of Black Widow Bluff was a makeshift bridge leading to a cavern on an adjacent, slightly smaller rise, and another cave mouth leading off the downward trail. After making certain that there were no threats potentially lying-in-wait, the heroes proceeded into the narrow gully where Likki and his companions were earlier ambushed. The goblin suggested that the mites could be tracked to their lair from the ambush site, though the group presumed that the hideous fey had probably withdrawn into one or both of the caves Dornas spied.

At the ambush site, the party saw for themselves the grisly results of the Klixarpillar mites’ assault against their monkey goblin foes. The Mongrukoo had been caught beneath a weighted net and peppered with arrows. Then the hive spider swarm had engulfed them and two of the goblins were utterly torn to pieces. Dornas inspected the net, and realized that it was made of strong, sticky silk fibers not unlike spider webs—though these would have been excreted by a very big spider. Likki noticed that the heads of the dead were taken away from the kill zone along with two injured captives. Likki dropped to his knees and growled an Abyssal prayer of vengeance to Mechuiti, and Nemanji joined him.

The party hunters—Nemanji and Kor’lec—effortlessly followed the mites’ trail down through the furrows of the sun-scorched summit. Unfortunately, not a few of their companions were being slow-roasted by the afternoon heat—worsened by the lack of shade so far above the treeline. Even Likki was stricken. He guessed this was why his grandfather had abandoned the area, “Mongrukoo belong in trees, maybe Klixarpillar belong in the rocks.”

Soon after, the grim mood was broken by a mocking voice that echoed and boomed across the chasms:

“The warm blood of your goblin friends will make delicious dinner wine!” and “This mountain is your tomb, foolish trespassers! I shall enjoy gnawing on your bones after you are gone!” While the castaways discovered a small-sized passageway just above the main trail that the mites could have been using to get around without being seen, a reconnaissance of the tunnel by Naga—Kishtari’s psionically-linked homunculus—showed no signs of the fugly fey.

It Actually IS Cricket 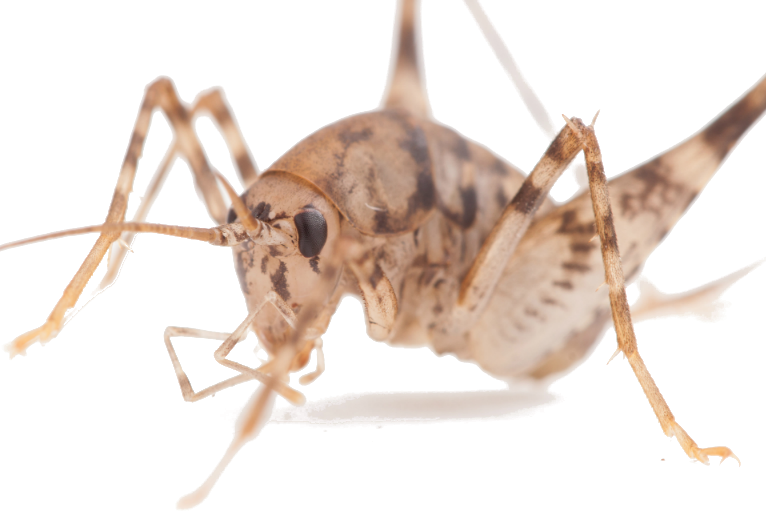 Scouting ahead, Kor’lec cautiously approached the first cavern mouth while his ape-demonling colleague covered his position. The Klixarpillars’ trail seemed to continue past that cave and the only immediate sign of danger was a single large-ish insect print in the dust—yes, a giant cricket. But the druid also noticed that the thin pillars of rock outside the entrance weren’t entirely natural, and had some markings that might have been text. Monica confirmed the etchings were Sylvan; and when made out and translated appeared to be warnings and curses against trespass. This was most definitely a mite site, and the castaways conjectured that the big crickets within might be bound to the service of the bug-loving gremlins.

Still, the team of adventurers had reached a point where many of their capabilities were exhausted until they could rest, and the midday sun proved to be their most inexorable foe: the only enemy so far in which retreat was the only option. Risk or not, the cave needed to be secured.

Kishtari sent Naga to survey the cavern and fell into a trance—the psicrystal became her eyes. Monica cast a light cantrip on the serpentine construct intending for the party to follow behind it. After a short passageway, the crystal snake found itself in an expansive chamber. In the center was a big firepit that hadn’t been utilized in years. Several expansive recesses radiated from the central cavern. In one there lay the corpse of a large flying reptile that perhaps had crawled into the cave to die.

Naga came very close to sharing that creature’s fate when danger emerged from the dark.

Three giant cave crickets, their hunting instinct piqued by the tiny crawling construct, hopped toward Naga. Kish, standing with her companions at the mouth of the cave, abruptly abandoned her telepathic trance and babbled something about Naga being attacked—but her companions had already sensed trouble and leapt to action.

Nemanji’s demonic fury kicked in and he stormed the cave bow drawn; Dornas, Kor’lec, and Kai close behind. Even Likki noticed the sudden change in tempo and charged forward coconut in hand. Though she couldn’t really understand his Goblinoid words, “Your familiar is in trouble, yes?” Kish nodded affirmatively to the courageous intent. In that split-second exchange, the kalashtar regretted wanting to kill him earlier.

Nemanji took his stance at the narrow entrance to the main chamber and fired his bow at the giant insects. Naga wasn’t helpless though, and deftly rolled and sprung clear of its predators. Detecting intruders at the mouth of their den, two of the crickets hopped over to Nemanji while a third’s backlegs were used instead to affect a deafening chirp. Taken aback by that cricket’s racket, the tiefling took its den-mate’s kickback to the chin. But Likki was right behind him with a healing prayer that set the barbarian’s jaw back in place.

Nothing was getting past Nemanji’s chokepoint though, save Naga, who coiled back up into its creator’s arms; Kish then backed up outside of the cave to where Monica was waiting with her bow drawn. “Not going in there,” the archeologist made plain, “Bugs.” 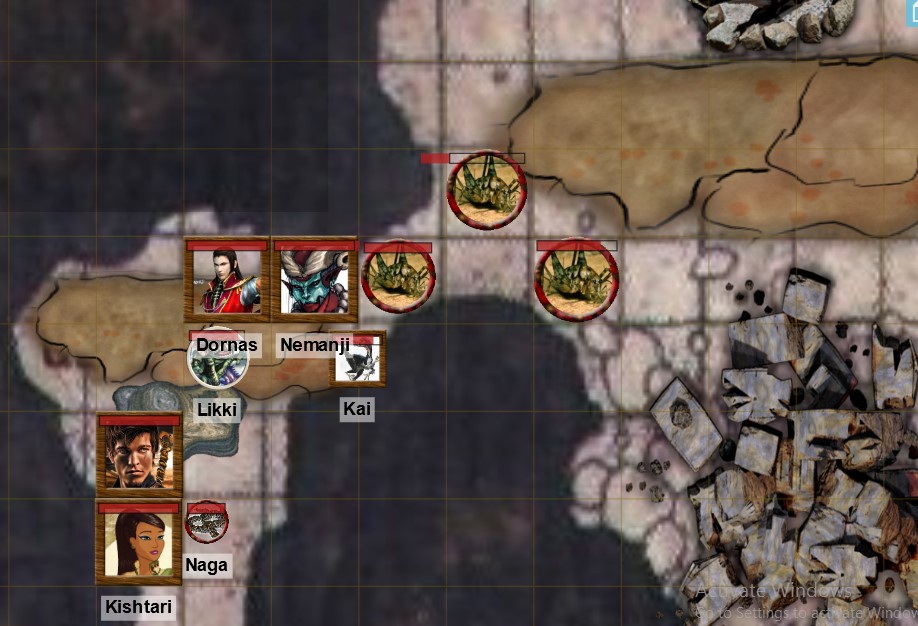 But Monica didn’t have long to fret about her phobias, as her companions made short work of the offending arthropods. After the rest of the team retired the other two, Kor’lec used his staff as a bat, and slog swept the vermin into the air, allowing hawk-eyed Nemanji to pull a hat-trick and clip off its legs with arrows. The insect landed with a splat on its stumps, and the match was over.

The cavern secured, the castaways had time to rest. Though Likki’s Mongrukoo companions were in grave peril, they had little hope of rescue with the team spent and suffering heat stroke. A search of the place showed that this lair was abandoned some time before. The explorers discovered a decanter in a tiny tunnel barely big enough for an adult mite to squeeze through. An inspection of the residue revealed that the container once held a few drafts of an invisibility potion and the remaining residue could be made active with a few drops of water.

Fresh after their respite, the heroes resolutely descended the path down to the bridge, which they saw strait away was woven of webbing. A hive spider spy scurried along the bridge’s underside to the lair entrance on the next tor. Knowing they’d been expected, the adventures took cover and considered their attack cautiously. Dornas’s cunning spellcraft emerged again, the magus suggesting using a cantrip to wobble the bridge while Monica created an illusion of something crossing on it. She fashioned a prowling cat, which was predictably fired upon from the dark cavern entrance. After a while, the hidden sniper ran out of ammo.

The invaders took advantage of the lull and crossed the bridge into the cavern entry and were halted by a crude but sturdy wooden portcullis. Beyond that, the darkness inside the cave seemed to tremble with the evil of gremlins and the almost alien nature of the spiders that doubtlessly awaited them within!

“Cricketty Heck!” I “mite” add. Pesky critters! I do know something of crickets – both the game and a particular brand of that dreaded beast known to people in Johannesburg as “The Parktown Prawn” (essentially a King Cricket – ugly little thing!)

Thanks for the update….. good luck on the next leg (after wicket?)

Do you think I got it?

You just made my day, lol

Fight With All Your Mites