I’m a little spider watch me spin
If you’ll be my dinner
I’ll let you come in
Then I’ll spin a web to hold you tight
And gobble you up in one big bite!

Our intrepid explorers were faced with a mountain to climb—literally! Though the ledge they were on appeared to gradually wind up and around the bluff they were ascending, a large encampment of monkey goblins ahead meant turn back, fight, or go straight up. Straight up it was.

The bluff at this point was too steep to scale by hand, so the party opted for a rope and piton system where Nemanji would climb ahead and assemble the rigging. The voices of the goblins ahead started to echo closer, so Monica wove an illusory rockslide that appeared to block the ledge and halted their approach.

At about 40 feet up, the tiefling wedged in his hoof and began pounding in a piton. There, the cagey hunter noticed a concealed outcrop and two small, ugly blue men with bows trained on him and his teammates. Once the mites realized that Nemanji had spotted them, they attacked. A large swarm of blue termite-spider things oozed out from the rocks around them and clambered toward the tiefling. “That’s a swarm!” exclaimed the archer, warning his friends below. 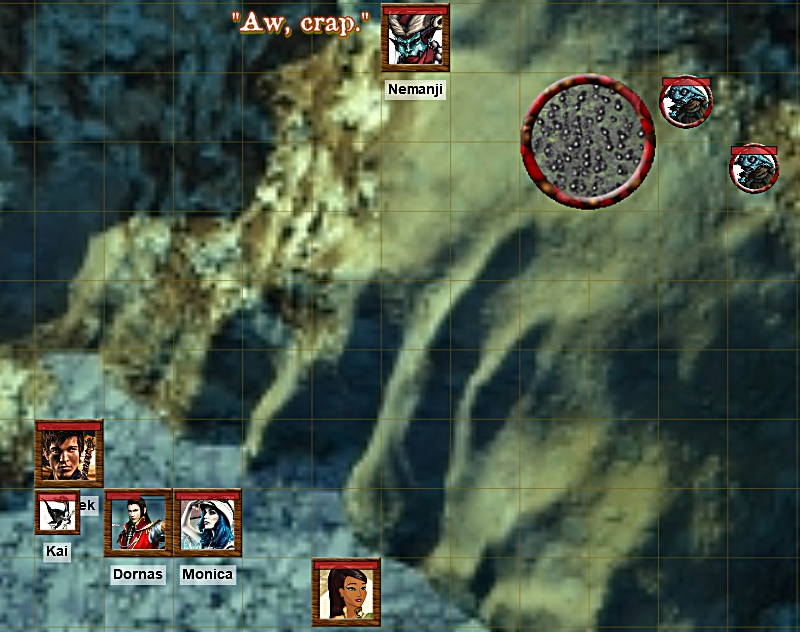 Fortunately, the swarm was slow in its advance. The arrows of the mite snipers were considerably less so. Dornas got grazed and returned fire with his crossbow, but the unsightly fey were well-entrenched and thicker-skinned than they appeared—a result of their resiliency against weapons not forged of cold iron. Kor’lec began to insult the mites in Sylvan, hoping to draw them out for the benefit of the archers. The others drew bows or torches, and prayed to providence that Nemanji could get away from the swarm before he was engulfed.

The demonic savage slid down the rope and dropped amid his companions no worse for wear, but the chittering swarm turned toward the group. The mites’ arrows were raining down around them. Up the ridge, angry, loudening monkey goblin voices suggested that the illusory blockade had been breached. Caught between foes, the heroes considered their last words or the survivability odds of fleeing back the way they came. 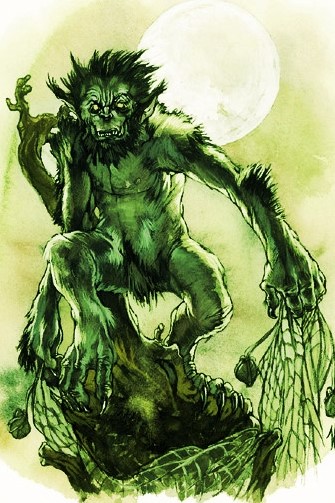 Kishtari was prompted to appeal to the very goblins she had advocated slaying only moments before. The startled humanoids limply formed ranks around their elder upon seeing the kalashtar approach, but did not immediately attack. They were, as Naga reported, severely injured.

Kish was quick to establish a telepathic rapport with the goblin leader, called Cenkil, and found his mind to be refreshingly articulate. The Mongrukoo — as Cenkil referred to his tribe, were accomplished tacticians, and as hurt as they were, turned the tide of battle in a moment. Kor’lec goaded the mites, who cursed their foes for allying with the Mongrukoo. But the revolting fey couldn’t line up a shot without being pelted by monkey goblin coconuts. They were soon routed, and in retreat averred in Undercommon that they must tell “Tlukkah” that the Mongrukoo had found new allies. While the nasty gremlins were ignorant of the fact that Dornas was very fluent in that language, they were clever enough to have the arachnid swarm cover their retreat.

But with some seamless teamwork between the monkey goblins and the castaways, no one suffered the stings of the flesh-starved swarm. The heroes pooled oil in the insects’ path, and when the bugs attempted to cross it, the goblins tossed their torches and engulfed the army of vermin in fire.

While the swarm was about broken, it might have rallied were it not for some inventive spellcraft from Dornas. The magus saturated his own torch with eldritch energies— and upon striking with it the nucleus of the swarm erupted into a tempest of flame, from which a torrent of carbonized arachnids fell like snow!

Not certain if their new allies were just using them, the wary monkey goblins surrounded Kishtari and pulled blades. The glib-tongued kalashtar appealed to their leader Cenkil and eased them to stand down, which the battered Mongrukoo did with obvious relief. Deciding they were all friends, the goblins agreed to go in peace. Before they did so, a notion occurred to the grizzled goblin hunter and he related to the castaways what they knew about the mount they called “Black Widow Bluff.”

Cenkil shared that his idiot brother Likki and he are the sons of the Mongrukoo chief, with a village at the base of the highlands. The chief tasked his sons with investigating an old shrine that their grandfather had captured from the mites, the Klixarpillar, twenty-five years before. The goblins thought they had wiped out the repugnant blue fey, but apparently not all of them. Cenkil lost five of his braves in an earlier ambush by the mites and a swarm of “hive spiders.” Most crippling was the death of the goblin party’s witch-doctor, whom the Mongrukoo warriors relied on for magical healing. Two other goblins were killed, and two more were captured by the mites. The latter issue led to the heated argument the castaways got a snippet of earlier.

Likki, the younger brother, wanted to try to rescue the captive braves, while Cenkil advocated a tactical withdrawal. The brothers parted in anger. Cenkil offered to share his tribe’s knowledge of disease panaceas if the castaways could safeguard his brother. The heroes readily agreed, with Monica in particular eager to lay human eyes on the old shrine. Kish sealed the alliance by offering Cenkil the expensive brandy recovered from the captain’s quarters of the Jenivere. The elder monkey goblin smelled the potent spirits, smiled as wide as a crocodile, and accepted the gift with grace. He offered a spell scroll in trade that could shield one against arrows, the only item of value recovered from their warbands’ dead shaman. 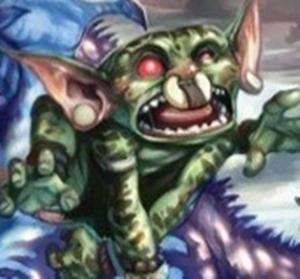 It did not take long for the castaways to locate Likki, an oddly sophisticated goblinoid seer who began fawning over Nemanji right away. The monkey goblin spoke the scathing demonic tongue of the Abyss, which Nemanji understood and Monica happened to have letters in. Likki referred to the tiefling as the son of Mechuiti, a name Monica recognized as an avatar or herald of Angazhan, a demon lord of cannibalism and jungles worshiped by less savory savages across the Expanse.

Despite the not-entirely unexpected reveal that the Mongrukoo were demon-worshippers, Likki proved to be quite holistic in his outlook, believing that Mechuiti was present in the jungle’s splendor in addition to its savagery. The goblin oracle admitted that the shrine could be anywhere—his father was very vague and the highlands were riddled with gullies and caves. He agreed to take the party to the place where the Mongrukoo were ambushed near the apex of the bluff, hoping the mites could be tracked from there. Dornas was hesitant to enter the furrow where the goblins got bushwhacked, opting instead to climb up the last few feet and check out the view.

On the way, Nemanji was excited to talk shop with his little counterpart, ignoring his teammates’ warning not to reveal too much about where they came from. To the monkey goblin, the world ended at the seashore and visitors to the island were “born of the wrecks.” Regardless, Likki didn’t quite believe their fantastic tales of “other worlds” beyond the surf.

At nearly 300 feet up, the castaways were able to behold the breathtaking entirety of Smuggler’s Shiv, all (roughly) 40 square miles of it. To the far west was an islet with an unsettling, grey undulating terrain upon it the heroes dubbed “The Isle of Never Going There.” To the far southwest the adventurers could barely make out the only clearly man-made structure discernible on the island, a lighthouse. To the south, the eagle-eyed among them noted the tell-tale swatches of roads or rivers between the endless blanket of trees. To the southeast they saw an honest-to-goodness mountain that dwarfed the high hill they were standing on. Likki called it “Red Mountain” and casually pointed out “the Devil” lived there. When Kish asked about this devil, the snarky little beast retorted “THE Devil. I knew you were born of the wrecks, but I wasn’t aware you were born yesterday.”

The PCs were pretty keen on allying with the goblins against them. In the session, I described them as “smurfs who’ve been beaten about the face with a brick.”

Fight With All Your Mites

Eyes in the Night