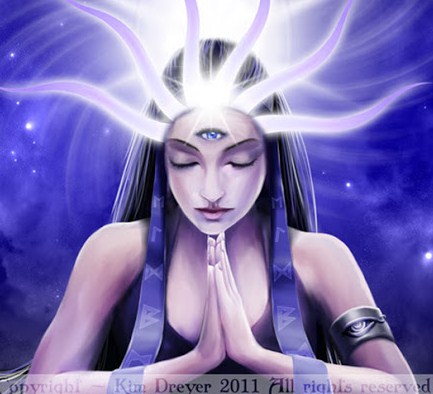 The Inspired are specially bred humanoids who have willingly surrendered their bodies to nightmarish creatures called quori. When a quori spirit possesses an empty vessel, it submerges the human spirit and takes complete control of the consciousness. When the vessel dies or is destroyed, the quori spirit, unharmed, returns to its home plane of Dal Quor until it can inhabit another suitable vessel.

The quori originally had trouble projecting their minds into the Material Plane. Unwilling to permanently join with a humanoid host as the kalashtar did, the quori sought another solution. That solution was to use controlled breeding and psionic manipulation to spawn highly evolved Riedran humans tinged with elf and lashunta blood. These perfect quori vessels possess otherworldly beauty and a penchant for decadence and cruelty. Unpossessed hosts, known as empty vessels, train hard for the day they receive their quori spirits.

An Inspired is taller than the average human, but lightly built, with large, almond-shaped eyes that vary in color. Common colors are black, viridian, or violet, although the eyes change color with the mood of the individual. They possess third eyes in the center of their foreheads, concealable when closed but which open and glow with otherwordly light when they utilize their psionic abilities.

All Inspired have skin and hair that range in color from pale or olive to deep blue or green. By human standards, most Inspired are strikingly handsome or beautiful, and they possess an unnatural charm and a commanding aura that helps them influence others. Most wear their hair long, and they favor ornate clothing and elaborate armor pieces made of crystal.