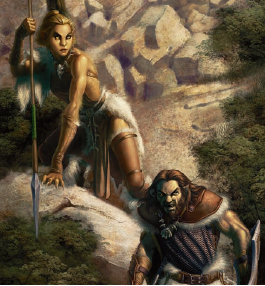 Shifters, sometimes called “the weretouched,” are descended from humans, elves, and natural lycanthropes, all which proliferate on Castrovel. Shifters cannot fully change shape but can take on animalistic features state they call shifting. Shifters have evolved into a unique race that breeds true. They organize into tribes and nations that possess distinct traditions and identities.

Personality: The personality and behavior of shifters are influenced by their animal natures. Many are boorish and crude, while others are quiet, shifty, and solitary. Just as most lycanthropes are carnivores, shifters have a predatory personality and think of most activities in terms of hunting and prey. They view survival as a challenge, striving to be self-reliant, adaptable, and resourceful.

Physical Description: Shifters are basically humanoid in shape, but their bodies are exceptionally lithe. They often move in a crouched posture, springing and leaping while their companions walk normally alongside. Their faces have a bestial cast, with wide, flat noses, large eyes and heavy eyebrows, pointed ears, and long sideburns (in both sexes). Their forearms and lower legs grow long hair, and the hair of their heads is thick and worn long.

Alignment: Shifters are usually neutral, viewing the struggle to survive as more important than moral or ethical concerns about how survival is maintained.

Names: Shifters often share names with humans, but prefer those that possess a savage, naturalistic ring.

Shapechanger Subtype: Shifters are humanoids with the shapechanger subtype.

+2 Dexterity, +2 Wisdom, –2 Intelligence: Shifters are wily and agile, but their fundamental bestial nature detracts from their reasoning ability.

Shifting (Su): A shifter can tap into her lycanthropic heritage to gain short bursts of physical power. Once per day, a shifter can enter a state that is superficially similar to a barbarian rage. Each shifter has one of several shifter traits—characteristics that manifest themselves when a character is shifting. Each shifter trait provides a +2 bonus to one of the character’s physical ability scores (Strength, Dexterity, or Constitution) and grants some other advantage as well. Shifter traits are described in the following section.

Shifting is a free action and lasts for a number of rounds equal to 3 + the shifter’s Con modifier. (If a shifter trait or other effect increases the character’s Con modifier, use the newly improved modifier.) A shifter can take shifter feats to improve this ability.

Shifting, though related to and developed from lycanthropy, is neither an affliction nor a curse. It is not passed on by bite or claw attacks, and a shifter can’t be cured—shifting is a natural ability for the race.

Low-Light Vision: Shifters can see twice as far as a human in starlight, moonlight, torchlight, and similar conditions of poor illumination. They retain the ability to distinguish color and detail under these conditions.

Each shifter trait has some associated minor behavior that most of its members exhibit. As with other aspects of shifter psychology, these are general impressions of the shifter race as a whole rather than strict rules that every individual must adhere to. Because members of other races often find shifters hard to accept or get along with, these traits have negative connotations.

Dreamsight: Dreamsight shifters are usually calm and contemplative, especially when compared to other shifters. The dreamsight trait is the rarest of all shifter traits, and many dreamsight shifters become druids within shifter communities. Unlike other shifter traits, which increase a shifter’s physical abilities, the dreamsight trait sharpens a shifter’s instincts and awareness. While shifting, a dreamsight shifter temporarily gains a +2 bonus to Wisdom and gains the ability to communicate with animals as if under the effect of a speak with animals spell. In addition, the shifter gains a +2 bonus on Handle Animal and wild empathy checks, even while not shifting.

Longtooth: Longtooth shifters are savage and almost feral. While shifting, a longtooth shifter gains a +2 bonus to Strength and grows fangs that can be used as a natural weapon, dealing 1d6 points of damage (plus an additional +1 for every four character levels she has) with a successful bite attack. She cannot attack more than once per round with her bite, even if her base attack bonus is high enough to give her multiple attacks. She can use her bite as a secondary attack (taking a -5 penalty on her attack roll) while wielding a weapon.

Razorclaw: Razorclaw shifters respect little other than physical power. While shifting, a razorclaw shifter gains a +2 bonus to Strength and grows claws that can be used as natural weapons. These claws deal 1d4 points of damage (plus an additional +1 for every four character levels she has) with each successful attack. She can attack with one claw as a standard action or with two claws as a full attack action (as a primary natural weapon). She can not attack more than once per round with a single claw, even if her base attack bonus is high enough to give her multiple attacks. She can attack with a claw as a light off-hand weapon while wielding a weapon in her primary hand, but all her attacks in that round take a -2 penalty.

Swiftwing: Swiftwing shifters are twitchy and nervous. While shifting, a swiftwing shifter temporarily gains a +2 bonus to Dexterity. His arms grow leathery flaps of skin or black feathers, which grant him a fly speed of 20 feet (average maneuverability). While airborne, the shifter can’t use his hands for anything other than flying, though he can still hold or carry objects. A shifter can’t fly while carrying a medium or heavy load or while wearing medium or heavy armor. A swiftwing shifter gains the Fly skill as a class skill.

Wildhunt: Wildhunt shifters are suspicious and untrusting. While shifting, a wildhunt shifter gains a +2 bonus to Constitution and the scent ability. This ability allows the shifter to detect approaching enemies, sniff out hidden foes, and track by sense of smell. A wildhunt shifter can identify familiar odors just as a human does familiar sights.

You know how to hit where it hurts with your claws.
Prerequisites: Shifter with the razorclaw trait, +4 base attack bonus.
Benefit: If you hit with both of your claw attacks in a round, you deal extra damage equal to 1d4 + 1/2 your Str modifier, plus 1 additional point for every four character levels you have.

By delving into your shifter heritage, you have developed the ability to ignore a little damage from every attack.
Prerequisites: Shifter, two other shifter feats.
Benefit: While shifting, you gain damage reduction 2/silver.

By delving deeper into your shifter heritage, you develop the ability to ignore some damage from every attack.
Prerequisites: Shifter, Shifter Defense, three other shifter feats.
Benefit: When shifting, your damage reduction improves to DR 4/silver.

You are a tenacious combatant, continuing to fight when others would succumb to pain and injury.
Prerequisites: Shifter, Constitution 13.
Benefit: While shifting, if you are brought below 0 hit points but not killed, you can fight on for one more round as if disabled. At the end of your next turn, unless brought to above 0 hit points, you immediately fall unconscious and begin dying.