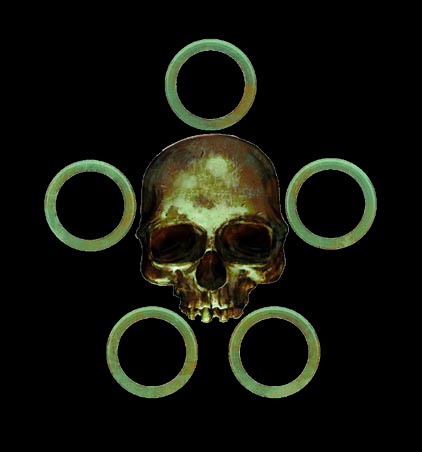 A widespread, and widely feared, criminal organization in that operates across Sargava and occasionally deeper in the Mwangi Expanse. While the people of Port Freedom know better than to speak openly of it, most Sargavans know that the “rivermen” only pretend to be innocent shippers and salvagers. The boldest call them scallywags, bandits, and murderers—Sargava’s equivalent of a thieves’ guild.

Based in Port Freedom, the Rivermen’s Guild started out as a coalition of barge sailors working along the Lower Korir River, hauling cargo back and forth from Fort Bandu and Kalabuto to Port Freedom and Eleder. With the treasury of the Sargavan government nearly spent, their ability to protect trade has suffered, and the Rivermen have grown increasingly bold in recent years. Their membership has grown as well—while Sargava withdraws it’s militia from its furthest flung villages and outposts, the people who live there have nobody else to protect them but the river pirates who rob them blind.

The members of the Rivermen’s Guild often do business ruthlessly and violently, beating or even killing the faction’s competitors (chiefly members of Gold Crown Shipping or the Aspis Consortium), stealing or sinking their cargoes, and hijacking or burning their barges.

The Guild maintain a number or legal businesses, and in truth, anyone making her living on Sargava’s rivers is welcome to join the faction (including fishermen and shipwrights). However, only those who actually own or operate barges are allowed to hold one of the five voting seats in the faction. Many of their number are simple traders and fishers compelled to join the guild, and even their pirates are reasonable—preferring to keep their victim’s alive to rob and extort another day. But reports hold that the upper echelons of the faction are truly corrupt—though a sufficiently vicious and ambitious underling, with hard work and dedication, can rise through the ranks.