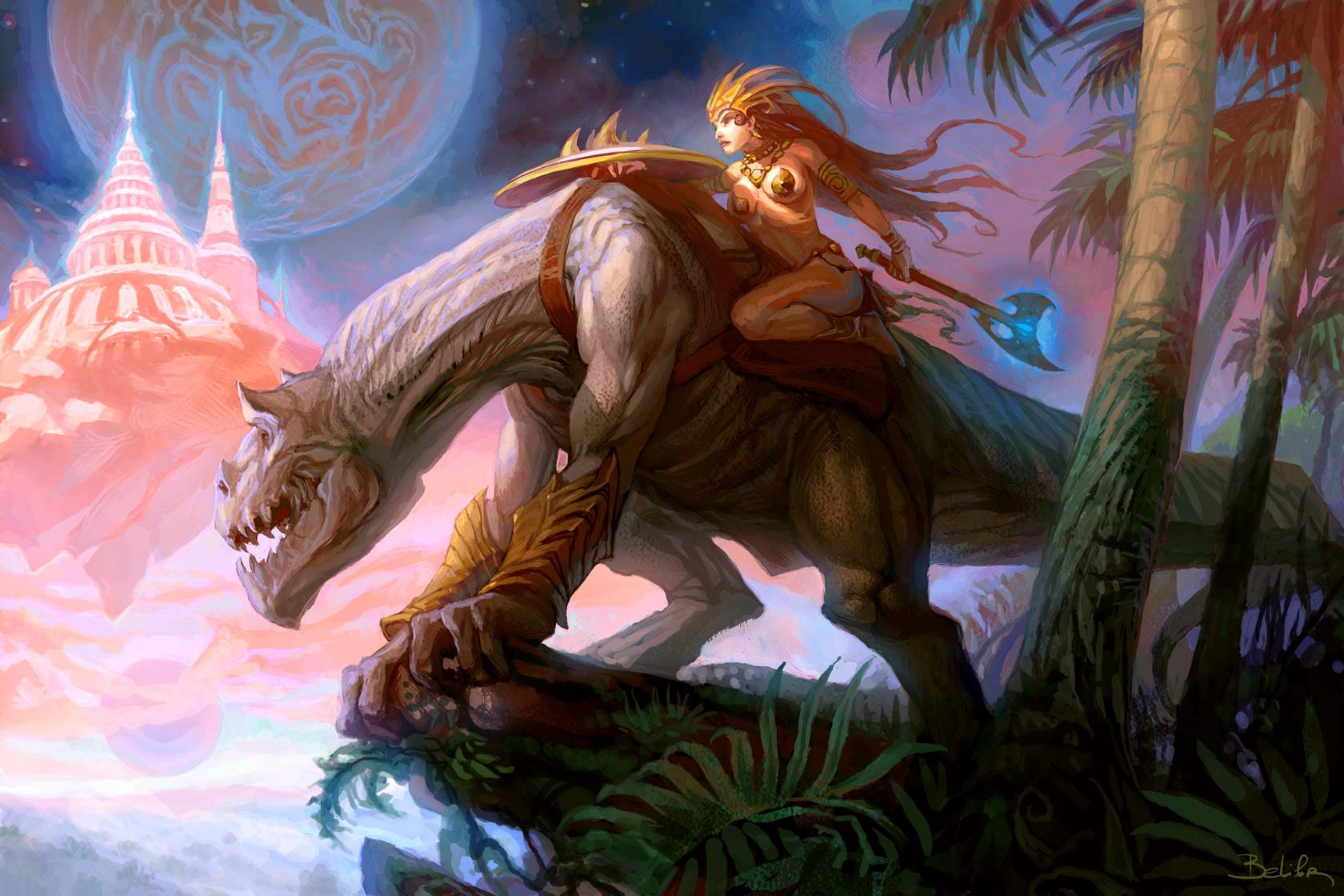 The planet Castrovel, known to Golarion as the Green Star, is humid and humming with life, its thick blanket of atmosphere trapping the sun’s energy and making most of the surface a lush, steamy paradise. Alien jungles abound with a staggering array of organisms, many of which have recognizable analogs on Golarion and some of which are unfamiliar and/or enormous—plants, fungi, animals, magical beasts, dragons, and bestial outsiders are found across the Green Planet, as well as fey, kaiju, and elementals. Lycanthropes are more common on Castrovel than Golarion, and the Green Star may be the origin of the syndrome that can turn a humanoid into a beast.

It is a realm of raw and wild nature unbounded, with large swathes untouched by civilization, and continents reclaimed by wilderness. Despite the planet’s nickname, the rainforests that stretch in all directions are not its only terrain feature—majestic mountains, wide grasslands, sultry swamps, rolling hills, and even deserts and tundras make up the vibrant biosphere of Castrovel. Given the sheer amount and variety of life on Castrovel, it’s small wonder that legends of the Green Star often associate the world with lust and fertility.

A single continent on Castrovel, called Sarlona, survived intact a great war and cataclysm that devastated the planet many years ago. The continent is dominated by the great empire of Riedra. The races of Reidra—mostly humans and lashunta —are ruled by The Inspired, near-human beings thought to be willingly possessed by ruthless extraplanar entities called the quori—living embodiments of dream and nightmare. The Inspired’s favored hosts are close in appearance to the half-elves from which they were bred, though they often possess unusual skin tones, vibrant hair colors, and subtle alien features. The Inspired possess third eyes. Most Reidrans religiously support their Inspired overlords; they tend to believe their leaders are holy and the apex incarnations of a reincarnationist belief system.

Humans have been evolving on Castrovel for over two million years, long before being seen on Golarion. They came to be and remain concentrated in the rugged, verdant continent of Sarlona. Unlike on Golarion, there are several distinct human subraces— Neanderthals, habilis, and others who branched away from what became baseline humans ages ago yet persist to the modern day. Some of these primitive subspecies mixed with monsters to become true-breeding hybrids such as shifters and changelings, both of whom now have extensive populations and cultures of their own. Baseline Sarlona humans differ very little from their counterparts on Golarion.

While the Inspired were solidifying their power base in Sarlona, the rest of Castrovel was engaged in a terrible war between two other continents and its inhabitants—the sensual humanoid lashunta and the termite-like formians. This conflict raged for over a Golarion century and devastated the planet, Now, most of the world is covered in “poison jungles” of irradiated gas and unbreathable spores, except for the isolationist continent of Sarlona.

Several secretive portals between Golarion and Castrovel exist, and the hideous Dream Merchants of Leng smuggle drugs, slaves, refugees and other contraband back and forth between the two planets. In the last few hundred years, Castrovel refugees from the worldwide cataclysm and fugitives from Inspired tyranny have been turning up all over Golarion. Is your character one of them? If so, why have your thoughts recently turned to the Green Star most Golarians think is nothing more than a twinkle in the night sky?

Castrovel boasts a wide variety of beings—selectable by players—that have been emigrating by choice or by force over the last century. Following are brief descriptions of these races’ typical niche in their planet of origin, along with links to their racial traits. Keep in mind that any of these can just have easily been born on Golarion, too.

Blues — Secretive, manipulative goblin-kin who once dwelt on Castrovel in great numbers, but have since been forced to infiltrate the tribes of their maniacal cousins on Golarion.

Changelings — These subtle shapeshifters are descended from humans and doppelgangers and are often employed by The Inspired as spies and assassins.

Duergar — The “Akiak” as they are known, are entirely psionic duergar -like dwarves. They differ slightly from the magical grey dwarves of Golarion and are descended from an integrated populace of dwarf and duergar who traveled to Castrovel ages ago.

Elans — A psionic infection from the dreamscape mutates this race of disparate alien humanoids from other beings.

Elves — Once a prominent race on Castrovel, having fled there from Golarion during the Age of Darkness, the elves remaining today are a besieged population largely restricted to remote nation of Adar. They share their mountainous land with an almost equal populace of kalashtar.

Forgeborn — An inorganic race originally produced by the lashunta as shock troops against the extinct formians, the forgeborn have formed militarist societies in the otherwise uninhabitable poison jungles of Castrovel.

Half-Giants — Large and muscular psionic wanderers descended from once-frequent pairings between lashunta and shobhad, the bellicose four-armed giants of the planet Akiton.

Kalashtar — Descended from half-elven monks who willingly bonded with quori rebels, this telepathic race are pursued and persecuted by The Inspired.

Lashunta — Displaying a unique dimorphism and a matriarchal culture, the psionic lashunta consist of tall, picturesque women and hairy dwarfish males—all have antennae. These sensual mystic warriors and martial scientists once ruled most the planet, but many of their lands were overthrown or destroyed. Some now work for The Inspired, but independent lashunta holds do exist in remote locales.

Maenads — Once the subject of gruesome legends, these seafaring psionic marauders now contain their rage with logic and contemplation.

Noral — To survive their harsh and rapidly changing environment, certain neanderthal clans have developed a symbiotic relationship with the dreamscars—small psionic organisms that make their hosts more resilient and civilized.

Ophiduans — The least caste of an evil serpentine race, ophiduans are often sent in disguise to infiltrate the world beyond their masters’ hidden bastions. Some have “gone native”—turned against their masters and seek their own destiny.

Planetouched — Any individual being or population, primarily human, mutated into a new species by the planar bleeds and anomalies that plague Castrovel, or those descended from outsider and humanoid coupling. Subspecies: Aasimar, Fetchling, Ifrit, Oread, Sylph, Tiefling, Undine. 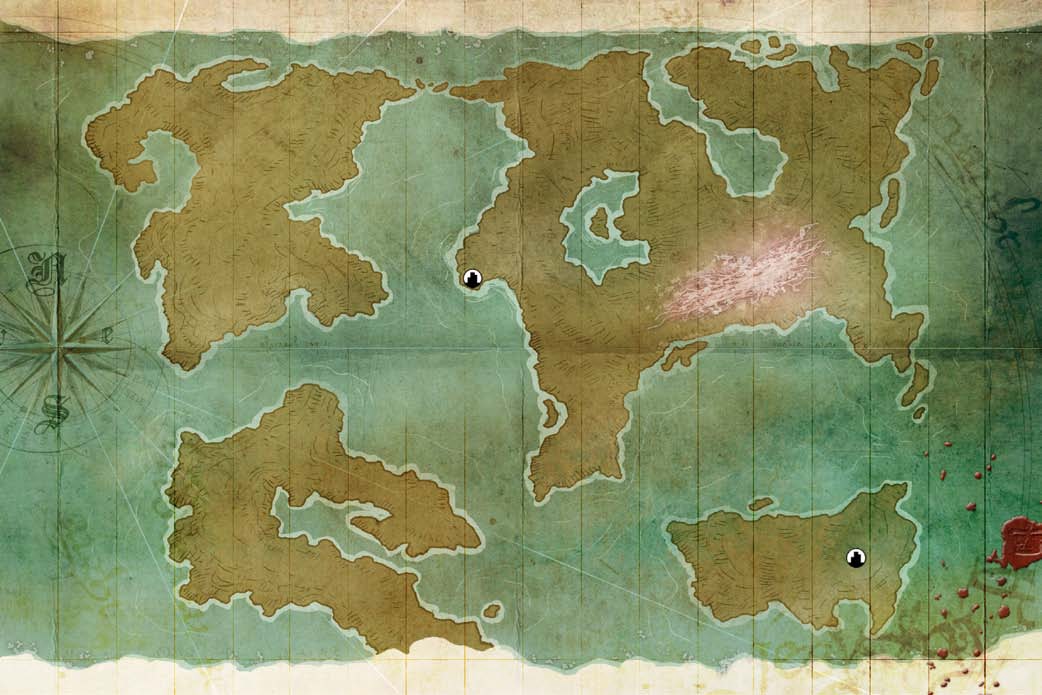