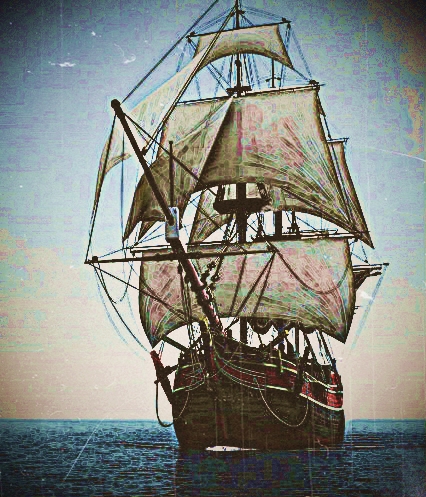 The Red Gull, a small, two-masted caravel, was ostensibly a salvage ship operating across the northwestern coastline of Garund’s coast. In actuality, she engaged in smuggling and occasionally slave shipping under her original designation “Red Skull.”

The vessel was owned by Lord Maragorn, a wealthy merchant baron based in Bloodcove who also owned the Jenivere. At the time it “rescued” the legendary Shiv Castaways, the vessel had a small crew of thirteen: eight hardened salts, four experienced officers, and her captain. All were discovered by the Castaways to be of larcenous or criminal bent, suggesting to them Maragorn was a criminal, as well. Further, the Castaways learned that the Gull was dispatched specifically by the merchant baron to recover survivors and salvage from the wrecked Jenivere, a ship he possessed a sentimental attachment to. After murdering and robbing the captain, a crime discovered by the lizardfolk ship’s lookout Gortross, the Castaways were confronted by the Gull’s remaining crewmen.

The ensuing battle resulted in the Castaways defeating and killing all but four of the Red Gull’s crew, and taking the ship—and her valuable cargo of shiver and dream silk—for their own. The heroes later cooperated with the Senghor navy when they were intercepted by a warship near that city-state’s waters. The Senghori were impressed by the Castaways’ liberation of the slaver vessel, and granted them good-will and leave with their prize. The officials further suggested they’d investigate Maragorn’s operations in Senghor now that they had seen evidence of the crime-lord’s wrongdoing.

Upon docking at the port of Suum’tero, Tyst let the surviving quartet of the Red Gull’s old crew go their way, and Dornas rechristened the ship “The Freedom.”

“Bloodbeard” Bjorn: First Mate, who assumed command after Cap’n Snake-Eyes’s murder. This ugly, big-nosed dwarf had a tangled mane of red hair. His red beard reached his waist and seemed to consume the low half his scarred face. He wore a long, bloodstained brown coat with studded silver plates attached to it. Though Bjorn survived the battle that put the Castaways in charge of the Red Gull, he was later killed by Tyst when Kishtari telepathically detected the dwarf’s treacherous intentions.

“Foul” Frithoth: This gangly, ghoulish human was the ship’s Bosun. He had sunken runny eyes and a mouthful of shattered teeth. He was balding and stank of scorched meat. He was bare-chested, his pectorals covered with tattoos depicting monstrous sea creatures. He wore an armored obi over his belly, studded leather sleeves strapped around his arms and studded leather chaps over canvas trousers. A cutlass, coiled whip, powderhorn and pearl-handled flintlock were holstered to his belt, and he was ever eager to raise the lash against bellyachers. The bosun picked the wrong hostage and was killed by Sasha, whom Frithoth threatened to shoot in order to persuade the Castaways to cease hostilities. Foul Frithoth kept a collection of trophy heads belonging to female aquatic humanoids in his cabin, with grisly evidence that he ate their bodies for sheer sick pleasure. Nineve was kept prisoner behind a false wall in the same cabin.

Gortross: This husky reptilian humanoid served as the lookout aboard the Red Gull, his keen-eyes functioning well by starlight and his observational talents supplemented by his avialan companion “Crawk-crawk.” Gortross had warty dark-green scales, a long and toothy muzzle, and a thin, crested chameleon-like tail. He carried a longbow, wore primitive bone and leather armor, a shiny collar, and took a battle stance like a trained soldier. Among a subspecies of rock-dwelling lizardfolk, Gortross was a skilled climber completely at home in the ship’s rigging. After a dramatic sword fight on the top deck with Kor’lec, Gortross was finally laid low when Kai, Kor’lec’s velociraptor, pounced on the lizardfolk.

Nineve: An androgynous aquatic elf found as a prisoner in Foul Frithoth’s cabin, spared from the bosun’s hideous depredations on account of the elf’s male gender. Nineve was nervous and wary, but quickly regained his spirits when the Castaways proved their compassion and friendship. Nineve went with the Senghor navy to help the authorities there bring Maragorn to account for his slaver and smuggling operation.

Punketah: This bald, sun-browned halfling had stretched earlobes and bone spikes through his cheeks and nasal bridge. Tribal tattoos covered his face, head, and hands. He wore a sharkskin leather suit beneath a child’s tailored reddingote—his one modern affectation. A fat brown cane toad hopped along beside him. Punketah was a witch-doctor of the headhunting Hazh’a pygmy tribe of the Kaava Lands later enslaved, purchased and freed by Maragorn. The halfling evinced incredible psychokinetic ability that allowed him to fly above the ship and rain spells down on the Castaways. Dornas, however, engaged the witch-doctor in a mid-air duel that forced him to retreat. The halfling’s escape was half prevented by Tyst, whose incredible leaping claw attack ensured only Punketah’s upper torso made it away.

Sigurd “Snake-Eyes”: Cap’n Snake-Eyes was an Ulfen human. This seasoned salt had long tangled blond hair held back with a bandana and a copious braided beard. He wore a dark green oilskin longcoat with brass buttons, and a white ascot. After falling asleep in his cabin while drinking brandy (and being psionically probed) by Kishtari, he was robbed of his valuables by the larcenous kalashtar and Tyst, the latter whom happened by. Following a debriefing where Kish reported the Red Gull’s less-than altruistic intentions to turn the Castaways over to the Bloodcove entrepreneur Lord Maragorn, Kor’lec snuck away to murder Snake-Eyes in his drunken sleep. The druid was discovered dumping the captain’s body overboard by the ship’s lookout, Gortross, who raised the hue and cry against their passengers.