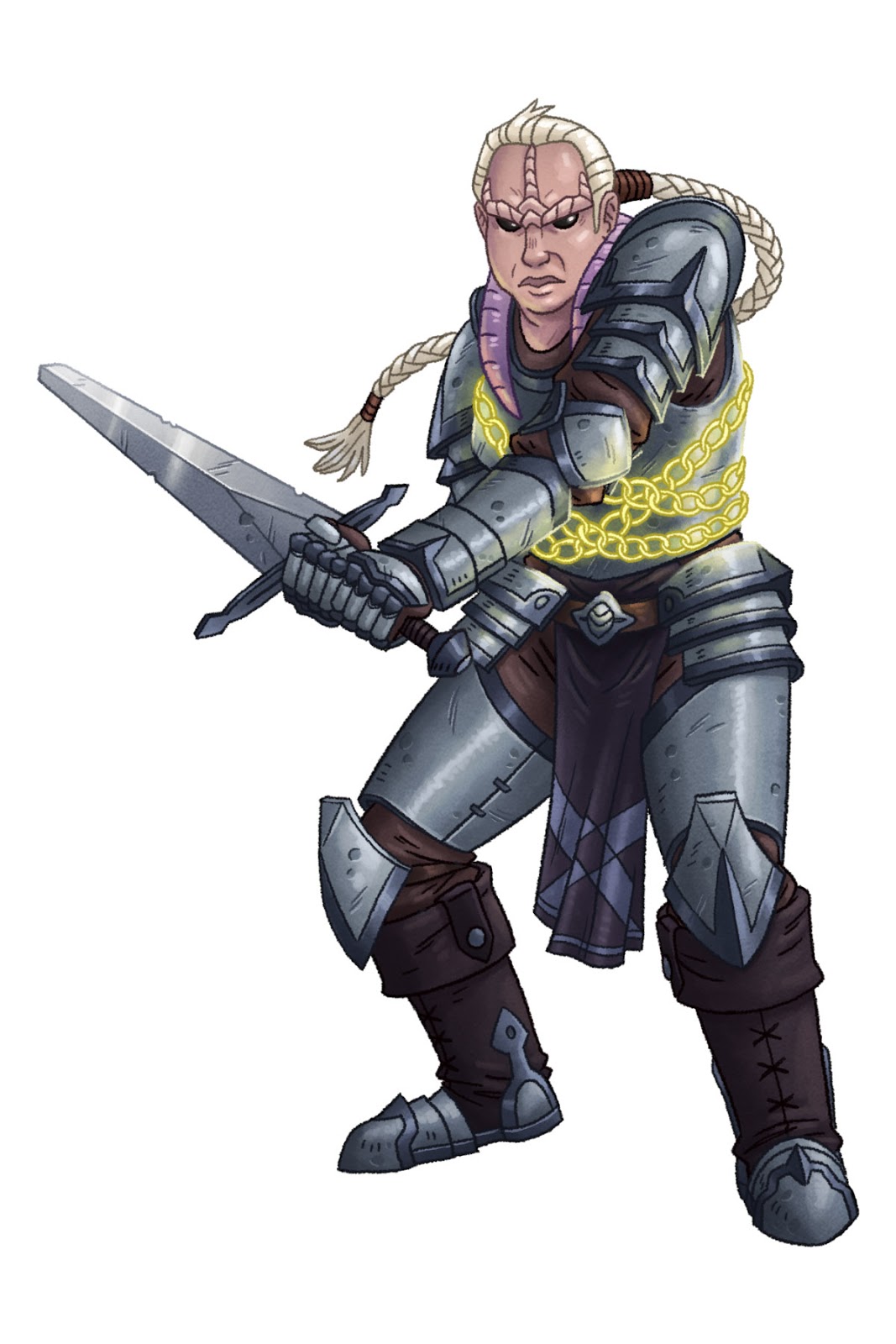 The norals are an offshoot of the neanderthal subspecies with a symbiotic bond with the “erliss,” a psionic creature also referred to as a dreamscar. Norals that have bonded with an erliss no longer dream, giving the creature its nickname, as well as giving the bonded norals the nickname of “the dreamscarred.” The symbiotic joining process has left the noral race, once primitive and xenophobic, open to the benefit of other creatures on their society, making them more likely to seek out information on other cultures and talented at social interactions.

Known for being physically clumsier than most, some surmise that norals lack agility because the bonding process has impacted their natural reflexes. Others argue it is because the race has a naturally stocky frame that simply does not lend itself well to precise movements. Despite this, the natural resiliency of their mental and physical forms has helped them overcome what is otherwise a liability for surviving the harsh lands near their settlements. However, their ability to block such assaults, combined with their natural ability to assault the minds of others, has given some a fear of the race as a potential subjugator of free will, a notion the norals find ludicrous for their views on free will as something to be nurtured and never to be threatened. While some norals choose not to bond with an erliss, this is the exception, rather than the rule. The bonding process itself is done as a ceremony once a noral has reached adulthood and is considered an important step in the maturation of their younger generations. This ceremony is typically done in private, usually with only the noral’s parents in attendance. Upon completion, the newly-dreamscarred noral is considered an adult and afforded all privileges as such.

Physical Description: Norals stand about as tall as humans, but are typically stockier in form. They have skin tones, eye color, and hair pigments of a similar range as humans, but a noral who has undergone the bonding process to become dreamscarred loses all skin and hair pigmentation, becoming an albino with pure white hair. A dreamscarred noral’s eyes turn pure black, and the erliss at the base of their neck rapidly grows into its mature form, with four tentacles coming out of the base of the noral’s neck, usually draping over the noral’s shoulders. In addition, a dreamscarred noral’s forehead and skull takes on a ridged and plated look, rather than the typical humanoid appearance.

Society: Like their forbears, norals prefer to adapt caves into living spaces, though noral cavern villages are meticulously decorated with austere statuary, bas-reliefs, and murals. Unbonded erliss dwell under heavy guard in subterranean ponds and lakes at the base of these cavern systems.

The societal structure of the norals is one of a democratic republic. In their society, only norals who have gone through the bonding process may vote for the Ruling Council, which then governs. Unbonded norals do not get to vote, as they are seen as still being children or outcasts, causing most young norals to seek to complete the bonding ritual or to leave for lands where such a distinction does not matter.

Alignment and Religion: Norals worship a pantheon of neanderthal analogs of familiar deities and spirits that reflect the many facets of daily life. While they have the full spectrum of alignments within their society, the general tendency of the race is toward lawful over chaotic, as the structure of the society and the bonding process and the responsibility of breeding the erliss leads most norals to respect the rule of law and the needs for organized social structure.

Names: Noral names are derived from the gutteral neanderthal monikers of their forbear race, though the empathic impressions of the erliss have modified these to be slightly more lyrical. A noral’s surname is derived from her erliss.

+2 Constitution, +2 Wisdom, –2 Dexterity: Norals are resilient in mind and body, but tend to be stocky and clumsy in their movements.

Symbiotic Resistance: The symbiotic bond between the noral and the erliss grants all bonded norals a +2 racial bonus on saving throws against disease and mind-affecting effects.

Symbiotic Surge: A noral is able to tap into the power of the symbiote to gain a temporary boost. Once per day, a noral can exhaust the symbiote to add 1d6 to a single d20 roll. This decision must be made prior to the result of the roll is determined.

Noral Psionics: Norals gain the following psi-like ability: 1/day—mind thrust. The manifester level for this effect is equal to 1/2 the noral’s level (minimum 1st). The DC for this power is equal to 10 + the power’s level + the noral’s Charisma modifier.

Gift of Tongues: Norals are naturally skilled at social interactions and understanding other cultures. Norals gain a +1 racial bonus on Bluff and Diplomacy checks, and they learn one additional language every time they put a rank in the Linguistics skill.

Low-Light Vision: Norals can see twice as far as humans in conditions of dim light.

Naturally Psionic: Norals gain the Wild Talent feat as a bonus feat at 1st level. If a noral takes levels in a psionic class, he instead gains the Psionic Talent feat.

Psionic Aptitude: When a noral takes a level in a favored class, he can choose to gain an additional power point instead of a hit point or skill point.

Languages: Norals begin play speaking Common and Noral. Norals with high Intelligence scores can choose can choose any languages they want (except secret languages, such as Druidic).