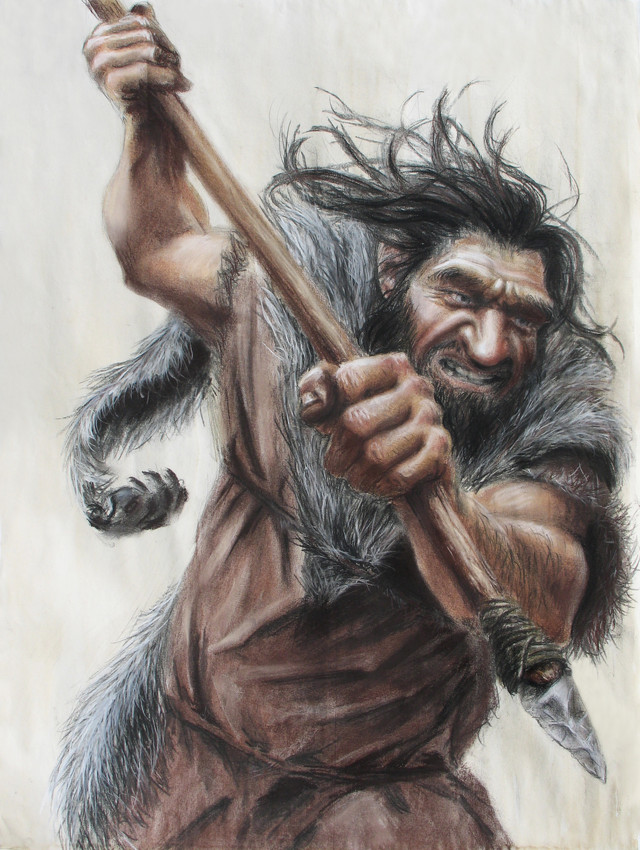 The neanderthals are a primitive race of humans, adapted to dwell in harsh domains, usually living in caves or abandoned underground ruins and skillfully hunting the surrounding regions.

Personality: Neanderthals are savage and brutal, reflecting the lands in which they dwell, but capable of great nobility. They react with suspicion or hostility toward unknown developments. Among friends, neanderthals are much more relaxed and sociable, and enjoy dancing, singing, tale-telling, feasting, and other pastimes involving large numbers of people.

Physical Description: Neanderthals are hairy and thickly built, with long arms and barrel chests. Their heads are a bit larger than a baseline human’s, with a sloping brow and a prodigious jaw filled with large strong teeth capable of cracking bones. Neanderthals are stocky, brawny figures, standing between 5 and 5-1/2 feet tall and weighing about 250 pounds. They reach adulthood at the age of 14, and live about 65 years.

Alignment and Religion: Neanderthals lead simple lives and are at one with the natural world. Good and evil, law and chaos have little interest to neanderthals, and they prefer to react to new situations based on similar previous encounters.

Each clan adheres to religious beliefs that are handed down via oral tradition and cave paintings through the generations. Most neanderthals do not normally worship actual deities; rather, they are taught by their spiritual leaders (usually shamans or oracles) about their clan’s particular beliefs. Many clans are animistic, worshipping animal spirits, but also participate in a form of ancestor worship with complex burial rites. Fire is also often worshiped by neanderthal clans.

Society: Neanderthals usually live in large groups consisting of several extended families. A single neanderthal clan usually dwells in a large cave network. When large caverns are unavailable, neanderthals settle in abandoned ruins or among rock formations; they do not build their own shelters.

Surrounding their clan’s home are their hunting grounds. The borders of these hunting grounds are often marked with crude fetishes made of skin, bone, and trophies taken from vanquished enemies. They have little interest in expanding their territories, but at the same time defend their homes with a ferocity equaled by few.

Names: Neanderthals have simple names, yet they attribute great power to them. Names are typically guttural and savage sounding.

Neanderthals are humans with the following alternate racial traits. These abilities collectively replace +2 to Any Ability Score, Bonus Feat, and Skilled.

+2 Strength, +2 Constitution, –2 Dexterity, –2 Intelligence. Neanderthals are strong and hardy, but are hampered by slow intellects and reflexes.

+2 racial bonus on Perception and Survival checks. Neanderthals have excellent senses and know how to get along in the wild with ease.

Climate Tolerant (Ex): Neanderthals suffer little harm from environmental extremes of heat or cold. They do not have to make Fortitude saves in extreme environments between –20° and 140° F (severe cold to severe heat). This ability does not provide any protection from fire or cold damage.