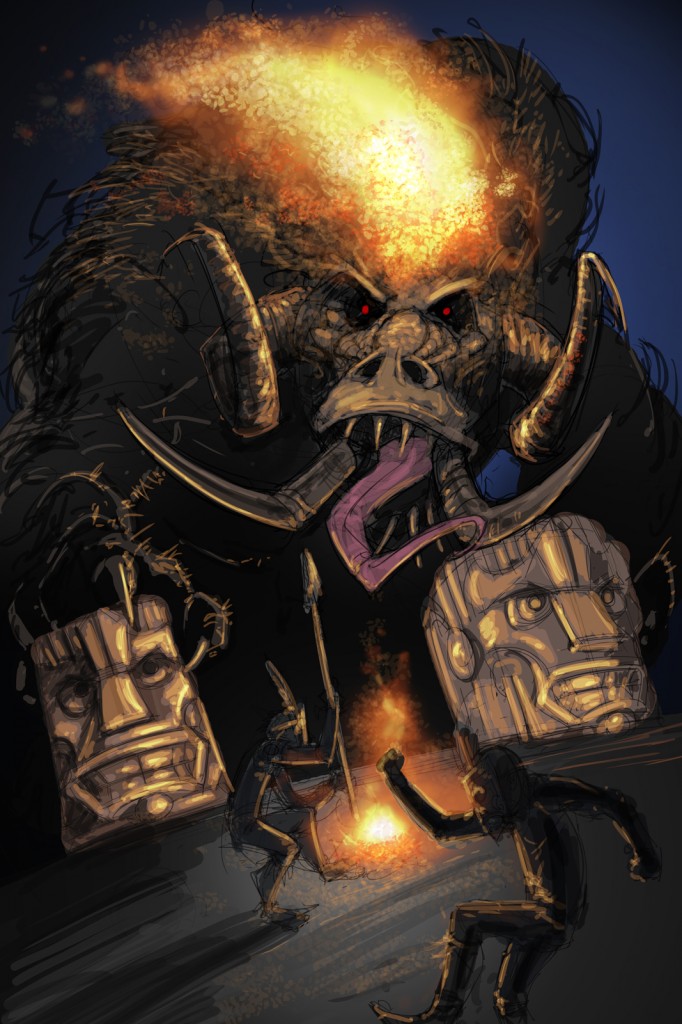 A yellow-green fire burns atop this towering red-furred mandrill’s head, or heads. It has massive, muscular arms ending in razor-sharp claws, and a slavering jaw filled with huge fangs and boar-like tusks that curl almost back to its blue cheeks.

Mechuiti (meh-CHOO-ee-tee) resembles a 25-ft.-tall, fiendish mandrill, with a yellow-green flame blazing atop its head. He is frequently depicted on Golarion with multiple heads and tentacles. He can stand erect like a human, but frequently chooses to knuckle walk.

Expelled from the sweltering jungles and deadly swamps of the Hell of Cannibals, Mechuiti was coughed out of a volcanic portal into an island prison. Here he schemes and plots his revenge while breeding his demonic minions: tieflings, monkey goblins, fiendish beasts, and the Behtu (see below). Though he was cast out of the netherworld in ancient times, Mechuiti has remained a terror through the ages. Only with the most powerful of their magics and technologies did the ancient humans drive him back to the island where, unable to destroy him, they bound him within a volcano.

Mechuiti first enthralled a small band of cannibal halflings, known as the Behtu, by visiting their leaders and priests in dreams and nightmares. After crossbreeding them with carnivorous apes, he infected them with his demonic ichor. He also taught them tattoo magic to give them fiendish power and strength. The Behtu have not found the key to secure their master’s full release, but they still search, torturing and enchanting any unlucky explorers stumbling upon their abode to extract information.

Mechuiti commanded the Behtu to breed many fiendish beasts and lizards with his blood: dire apes, fiendish giant lizards, and even demonic spiders. He has raised several generations of fiendish lava dragons lairing in the volcano’s caldera which guard his temple-fane and deal with any threats beyond the Behtu’s reach.

Mechuiti is honored by humans, gnolls, monkey goblins, and other remote monstrous tribes across the Mwangi Expanse, but his worship is typically an islander phenomenon—especially by those living on volcanic islands. Elsewhere, his worshipers tend to become absorbed into the Spawn of Angazhan. He is his own entity, though many scholars of forbidden lore connect him directly to Angazhan as either an avatar or herald of that greater deity.