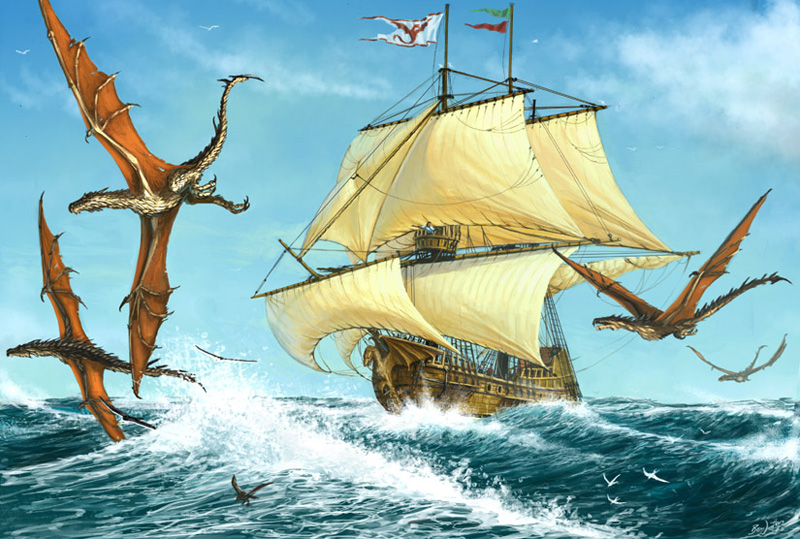 The Jenivere was a large merchant ship, a Wyvern-class vessel commonly used by the Inner Sea nations for trade, exploration, and even war, valued for its combination of seaworthiness and capacity for carrying numerous passengers. It was owned by a Bloodcove-based pirate-turned-businessman named Lord Maragorn, and was once known as the Stardagger, the flagship of Maragorn’s fleet.

For the past several years, Captain Alizandru Kovack made the western run between Magnimar to the north and Eleder to the south and then back with few complications, despite the fact that his route carried him through waters controlled by the piratical Free Captains of the Shackles, rushes with the eternal winds of the Eye of Abendego, and into periodic conflicts with the Nidalese navy. Although Captain Kovack’s crew appreciated this record, the baseless fear that the Jenivere had robbed luck’s coffers one too many times lay heavy on the hearts of many.

While the Jenivere was a merchant ship, primarily concerned with delivering goods to and from Sargava, she’s traditionally kept several compartments open to take on paying passengers. On Moonday, Pharast 4th, Spring of 1808, on the final leg of its four-month journey along the western seaboard of Garund, the Jenivere departed Senghor in the Mwangi Expanse for Eleder, Sargava.

The crew consisted of the captain, a first mate, a cook, and dozens of petty officers, marines, and hardened sailors.

Alizandru Kovack: A human Chelaxian man whose family made the Magnimar to Eleder run for generations, Captain Kovack seemed pleasant enough with his passengers, but was a strict disciplinarian when dealing with his crew. Kovack was a partner, willing or otherwise, in Ieana‘s schemes to scuttle the ship on Smuggler’s Shiv and survived the wreck that killed everyone else but himself, Ieana, and the passengers.

Alton Devers: The Jenivere’s human first mate was friendly with both passengers and crew, but sometimes seemed to chafe under the strong discipline of Captain Kovack. Devers rescued the passengers from the sinking Jenivere as it wrecked along the coast of Smuggler’s Shiv, but was not able to save himself. He left behind a son, Brynan, who abandoned the crew when the ship stopped in Bloodcove.

Rambar Terillo: A taciturn human from Senghor, Ship’s Cook Terillo served in that capacity aboard several ships, though apparently not on account of his culinary skills, which seemed to be limited to watery soups.

The passengers on this trip included

Aerys Mavato: A severe half-elven woman who boarded in Port Peril, where she immediately got into a scrape with a crude sailor. Spent most of her time in her bunk, seeming to purposefully avoid fraternizing with the ship’s other passengers.

Dornas: A mysterious Taldan man of noble attire and bearing who boarded in Quent. Refused to speak of his family.

Gelik Aberwhinge: A sharply dressed gnome from Magnimar, Gelik spent much of his time writing in the ships’ common areas, and took every opportunity to tell long-winded stories, boast of past journeys, or quip about anything in his field of view.

Ieana: A bookish Varisian scholar who tended to keep to herself, Ieana was traveling to Sargava to explore the ancient ruins there. Rumors aboard the ship alternately suggested that she was the Jenivere’s owner, a Chelaxian agent, or Captain Kovack’s secret lover. Ieana kept mostly to herself, and grew more intent on her studies with each mile the ship traveled closer to Eleder.

Jask Derindi: A prisoner loaded aboard in Corentyn, Captain Kovack saw to this taciturn human’s needs with curt courtesy, but insisted he be left alone, sequestered in the ship’s brig.

Kishtari: A charismatic young woman who boarded in Magnimar. A (former?) con-artist and thief alien to the wilds of Garund, yet giving the impression that she felt quite at home in the hot and verdant land.

Kor’lec: This half-elf and his pet velociraptor were returning to their home in the Expanse after a lengthy trip across Avistan. Recognizing Kishtari as a pickpocket he met—and took pity on—during his brief time in Riddleport, the two happily caught up.

Monica Montana: A brilliant but radical intellect, this Taldan archeologist and Mwangi scholar hoped to restore her reputation by finding fortune and glory in the field. An old passing acquaintance of Taldan countryman Dornas.

Nemanji: A demon-blooded Mwangi savage who boarded in a hurry at Bloodcove, following Kishtari’s suggestion that he find succor aboard the ship. Though given a wide berth, rumors floating among the Jenivere crew were that he murdered someone a little too important in the cutthroat city.

The Jenivere never made it to Eleder. Mere hours from her destination, the ship’s long streak of good fortune under the command of Captain Kovack came to an abrupt and suspicious end on the rocky northern coast of Smuggler’s Shiv.