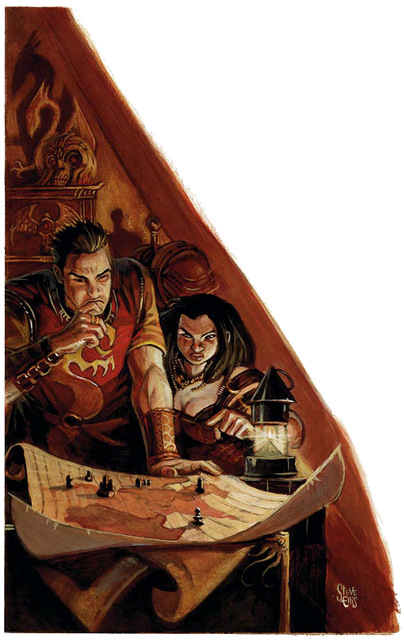 Looking for Over-the-Top-Action? Combat should never be a drag, but it sometimes kinda is. In the media that inspires this campaign, violence is gruesomely funny and outrageous. Age of Serpents Player Characters are the heroes (or lovable scoundrels) of an action-packed story and should be awesome most of the time. Because of these two things, the campaign uses some nifty rules components.

Check out the Fortune Points system! These points may be spent for small bonuses, or permanently expended for significant advantages. They are gained by active participation, roleplaying, and contributions to this web site.

Boon? These are one time quantifiable benefits, like a favor or small bonus.
Contact? Contacts can be called upon to accomplish tasks for the PC, though the task might require some negotiation.
Relationship? A dramatic association, such as a friendship, mentor/student, romance, or rivalry. While developing relationships does get XP for the PC and the party, the benefits here are mostly in roleplaying opportunities.

With so many classes to choose from in the current edition of the game, it is unreasonable to restrict one player to a handful of classes that can handle magical traps. While classes with the trapfinding ability excel at it, anyone can use Disable Device to attempt to disarm magical traps.

Skill Challenges represent a team effort to accomplish an out-of-combat goal and take a variable amount of time. Once presented with a Skill Challenge, individual PCs can choose how they want to contribute to the party’s overall success, and may utilize whatever skills they can reason is appropriate. Sometimes, an attack roll or saving throw can be used instead of a skill at the GM’s discretion. The difficulty of the check is usually equal to the APL +5 for easy, +10 for average, +15 for difficult, +20 for very difficult. The GM may apply modifiers, or assign players involved the challenge different DCs depending on the skills they decide to use.

Players will be notified when they’re in a skill challenge. Everyone is asked what skill they’re using and the reason they’re using that skill. Based on the explanation, the GM determines whether they’re rolling against the easy, average, or difficult or very difficult DC.

Note the system requires the successful contributions of at least 4 people to spectacularly succeed. A player may decide to aid another, assuring another player’s success, rather than try for a success of his own, but doing so may sacrifice the possibility of getting a spectacular success if the party has 4 people or less. Companions creatures and hirelings can only aid another in skill challenges.

Example: The GM rolls a random creature encounter while the PCs are exploring a hex. The “challenge” is to achieve readiness for the encounter and the choice to avoid it. In this situation, the skill DC is equal to APL +5 for most appropriate skills, but the GM adds to it the average Stealth score of the foes, making the total DC 12. The GM informs the players that that there may be trouble ahead in the form of a monster encounter, tells them they are in a skill challenge, and asks how they want to deal with it.

Player #1 decides to use Survival, informing the GM that he is one with the wilderness, and if they are in a monster’s territory, he would know about it. He roles against the normal DC of 12.

Player #2 says she’ll use Perception, she’s got a keen eye and can sense when trouble is imminent. She rolls against the normal DC of 12.

Player #3 gambles that their potential foes are animals, and argues that his Knowledge Nature would recognize signs of their presence. The GM knows the foes are in fact, death dogs—magical beasts not normally covered under Knowledge Nature. However, he decides the effect a pack of such creatures would have on the ecosystem might be discerned by a dedicated scholar of nature. The player rolls against an elevated DC of 17.

Player #4 is stealthy and says he’s scouting, reasoning his Stealth skill allows him to get the drop on the bad guys before they see him. He rolls against a normal DC of 12. Player #4’s animal companion cannot contribute to the overall successes of the party, but it can use aid another to improve Player #4’s own Stealth check.

The GM tallies successes for the possible outcomes…

With 4 successes and 0 failures, a spectacular success, the party can easily avoid or ambush the death dogs. The DM allows the PCs to set up traps and receive a surprise round. Because they all used different skills, the GM decides a nice additional bonus for the party is that the evil canines automatically fall prey to their snares.

With 3 successes and 1 failure, a moderate success, the GM rules the party can avoid the death dogs, but only by taking a circuitous route or taking cover for an extended period of time. The GM adds 1d4 hours to their hexploration time.

2 successes and 2 failures is neither a success or failure. The encounter proceeds normally.

1 success and three failures is a moderate failure. The death dogs surprise the party.

With no successes, a spectacular failure, the GM decides that not only do the death dogs surprise the party, they have also coerced a pair of wolves to help them (increasing the CR by 1), and they ambush the party in advantageous terrain.

Under the Pathfinder rules, spellcasters can cast most of their 0-level spells an unlimited number of times per day. Even so, the spells create water and purify food and drink, cannot each be cast more times per day than the caster’s class level x casting stat bonus (INT, WIS, or CHA). This is to simply prevent “spamming” these spells to end drought and world hunger.

Create or Roll a Background

Here is a useful Background Generator to get your creative juices flowing!

Special Notes: Neutral-leaning characters are recommended, but traditional heroes, anti-heroes, and villain protagonists will find plenty of motivation. The campaign’s overplot assumes the impetus to form a party, establish friendships, and cooperate with their friends. Characters must have some motivation to explore and to discover ancient secrets. The protagonists may often be in a position where negotiation and diplomacy are simply the best course to take—even with evil beings. Though a huge variety of unusual races are available, the core races (human, dwarf, elf, gnome, half-elf, half-orc, halfling) are encouraged for verisimilitude. Characters of these races will receive an extra boon by the DM.

Though the bulk of the campaign takes place in the Mwangi Expanse, human characters can select from any of Golarion’s many ethnicities. There are also four primitive human subspecies (ergaster, habilis, cro-magnon, neanderthal) available that trade baseline humans’ flexibility for specific abilities and bonuses. Additionally, the doppelganger-descended changelings, lycanthropic shifters, and telepathic kalashtar from the Eberron campaign setting have been converted for Pathfinder for this campaign.

Players will roll abilities at the first game session, but have the option to assign numbers to their class requisites. All characters start with 100 gp worth of weapons and gear. Players must select a Serpent’s Skull Campaign Trait and an additional Combat, Dream, Equipment, Faith, Magic, Psionic / Psionic Race, Race, Regional, Religion or Social Trait. Players may also choose a Drawback and a third Trait. Traits from the book Sargava, The Lost Colony, are particularly appropriate and will be useful over much of the campaign.

The aid another rules as written undermine skill checks. After all, for players who want to succeed at a skill check, the safest bet is to have every PC use aid another to give a bonus to the PC with the highest skill bonus. If you crunch the numbers, it becomes clear that this strategy is nearly unbeatable. To prevent this, the following changes to the aid another rule are in effect:

Higher DCs: The DC to aid another is 10 + APL. This represents the difficulty in providing a skilled-enough effort to actually aid a fellow character.

Consequences: A failed aid another causes a -4 penalty instead of a +2 bonus.

The reincarnate spell available to druids, shamans, and witches allows the caster to resurrect the deceased in the body of a creature of the same type. For most characters, that would be humanoid. Rather than the default reincarnation table, I’ve created a new table incorporating many more possibilities, with the conceit that the spell creates a new body from the “elements at hand,” that is to say, creatures found in the part of the world where Age of Serpents currently takes place.