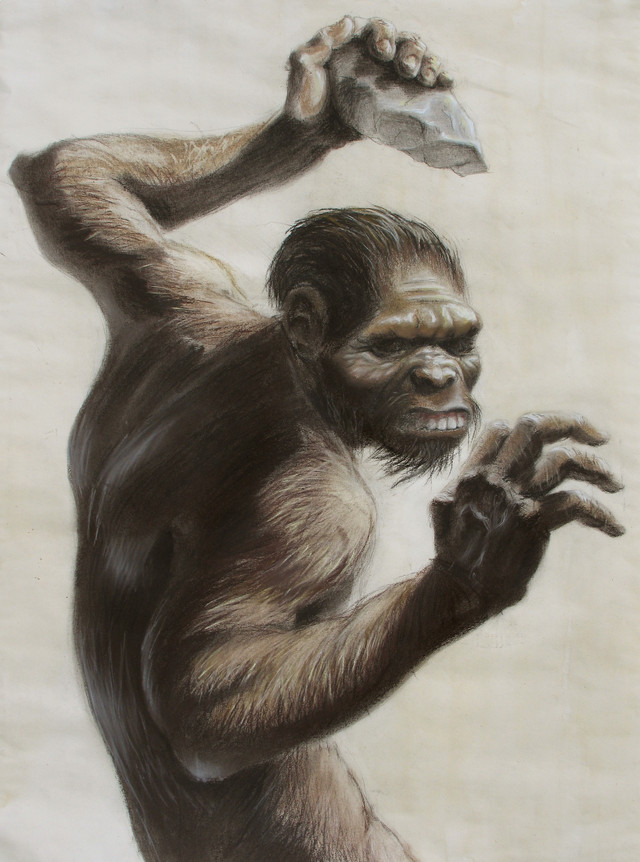 Habilis are primitive, squat, ape-like ancestral humans. They are the earliest true hominids to appear, only marginally more intelligent than the wild primates they are descended from. They are thought to be the first primates to prepare and utilize simple basic stone blades and shanks of stone, bone, and horn. Habilis are omnivorous, enthusiastic savannah hunters and scavengers of carrion, driving off larger predators with thrown weapons to steal their kills. Quick, powerful, gregarious and noisy, they move in large social groups of 10-60 members. Habilis are alert and nomadic, traveling, feeding, and sleeping as a cohesive unit. Habilis troops are dominated by an alpha male who earns his exclusive right to lead and breed by brutalizing challengers and by keeping his extended family safe and fed.

Personality: Habilis possess a highly expressive means of communication that includes hooting, grunting, and simple, gutteral words. The smartest habilis are capable of learning and speaking more sophisticated tongues, but they have little reason to bother. They are savage, defensive, and opportunistic, reacting with fear and aggression to intruders. Habilis have particularly strong stomachs and are ever ready to make the most of any chance to eat. They especially love bone marrow and an individual may carry a succulent bone with her for days to chew on intermittently.

Physical Description: Habilis have a slightly larger braincase and smaller faces and teeth than their ape cousins. They still retain many ape-like features, including long arms, a covering of course fur and a naked, moderately prognathic face—which is savage and wrinkled with a fanged mouth. They stand upright at 3-4½’ tall and weigh 60-85 lbs, with the dominant males significantly taller and heavier than the females. Fur coloring varies widely from troop to troop, but habilis despise water and thus their hair is usually caked with grey, foul-smelling dirt and offal.

Alignment and Religion: Left to their own, most habilis troops lack the imagination to question and wonder about the world they live in. Unless they are dominated and indoctrinated by more sophisticated beings, they don’t have a need for faith or ceremony. Though ignorant of ethical concerns, many habilis seem to take a perverse joy in torturing whatever creatures they can catch before eating them.

Names: Habilis don’t speak much, preferring a simple language of gestures and noises. Only the more sophisticated troops differentiate themselves with names that are barely more than growling sounds. Habilis are often dominated and enslaved by more powerful and intelligent beings who may choose to give them designations. The rare habilis “adopted” into civilization or an adventuring party might find herself with a nickname.

Habilis are humans with the following alternate racial traits. These abilities collectively replace +2 to Any Ability Score, Bonus Feat, and Skilled.

+4 DEX, +2 STR, -6 INT, -4 CHA. Habilis are quick and powerful; but aggressive, foul-smelling, and possess a minimal ability to reason.

Scent, 15’: Habilis can detect enemies, sniff out hidden foes, and track by sense of smell.

Natural weapons: Habilis possess a bite (1d3) and 2 slam attacks (1d3). Unless they are utilizing manufactured weapons, all of these attacks are considered primary.

Athletic: Habilis have animal-like nimbleness and receive the Athletic feat for free.

Immunities: Habilis can eat nearly anything and prefer carrion. They are not susceptible to the effects of disease, or the sickened and nauseated conditions. They can, however, carry diseases. If a habilis loses its saving throw against disease it becomes a carrier, and can infect others through its bite for 1d4 days.