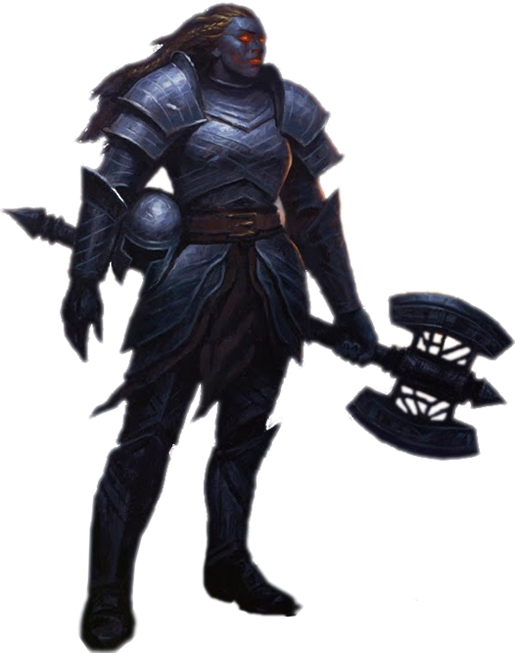 Created during a world war between the psionic lashunta and their formian enemies, the race of creatures referred to as the forgeborn were left to their own devices within the poison jungles the conflict left behind. A hybridization of flesh and minerals, the forgeborn are varied in appearance and form, but were all created by merging psionically-empowered materials with the body of a humanoid to fashion a new creature. Facing attrition from battling the gargantuan denizens of their blighted lands, the forgeborn routinely seek dying and recently deceased humanoids to transform into members of their race. They sometimes come across their former masters’ portals to Golarion, offering them new lands to explore and exploit.

Although they may appear as some sort of bizarre construct, the forgeborn are intelligent and capable of thought, emotion, and reasoning. While much of their time is spent working out combat strategies and ways to harness the psionic energy that powers their forms, they are avid students of history and explorers of their lands’ many ruins. Forgeborn benefit from longer lifespans than the humanoid bodies that most of them were made from, but their inclination for combat means many never actually reach middle age. Among the forgeborn, such a fate is not mourned, for the fallen can sometimes be reclaimed and rebuilt into a new member of the race, resulting in a theology very similar to reincarnation.

Physical Description: Forgeborn are a tall and thick race, and stand a few inches taller than most humans, with their bodies flowing from well-muscled flesh to mineral components and back. The exact nature of the forgeborn’s mineral parts varies between members of the race, these are usually alien and psionically resonant crystals, gems and metals. All forgeborn have small glowing orbs embedded within their skull and chest, which are the psionic power sources that animates their forms. Although both male and female versions of forgeborn exist, such distinctions do not matter in forgeborn society, since there is no need for copulation. While most forgeborn come from human bodies, members from other races are not uncommon.

Society: The origins of the forgeborn and the dangerous inhabitants of their habitat have led them to develop a social structure not unlike an army, where forgeborn tend to cluster based upon role, rather than from a family or tribal structure, as other races prefer. All members of forgeborn society are given a role to benefit the civilization, although not all are given combat roles, since weapons and armor must be crafted in order to be used, and skill in their assigned role is what measures a forgeborn’s worth among his peers. Since the forgeborn do not require food or sleep, few worry about gathering such resources, although there is an aesthetic element to some forgeborn, particularly in artwork depicting great battles, so forgeborn artisans are respected within their society.

Alignment and Religion: Forgeborn view victory as the most important outcome and honorable combat is something they view as a paradox. They fight to win, not to be honorable, although they do accept surrender and traditionally do not conscript unwilling humanoids into their ranks. The structure of command is integral to the proper functioning of an army, so few forgeborn go against the defined chain of command. Most forgeborn are lawful neutral.

Names: Forgeborn are built from members of other races and thus sometimes keep their given names or adapt them slightly, usually shortening them. Forgeborn surnames otherwise insinuate their core mineral makeup and inorganic nature.

+2 Strength, +2 Intelligence, –4 Charisma: Forgeborn are strong and have quick minds, but are monstrous in appearance and have difficulty relating to other races.

Slow and Steady: Forgeborn have a base speed of 20 feet, but their speed is never modified by armor or encumbrance.

Natural Armor: Forgeborn are sturdier than other races and gain a +1 natural armor bonus to their AC.

Source Crystal: Unlike most half-constructs, forgeborn can be raised and resurrected.

Naturally Psionic: Forgeborn gain the Wild Talent feat as a bonus feat at 1st level. If a forgeborn takes levels in a psionic class, he instead gains the Psionic Talent feat.

Psionic Aptitude: When a forgeborn takes a level in a favored class, he can choose to gain an additional power point instead of a hit point or skill point.