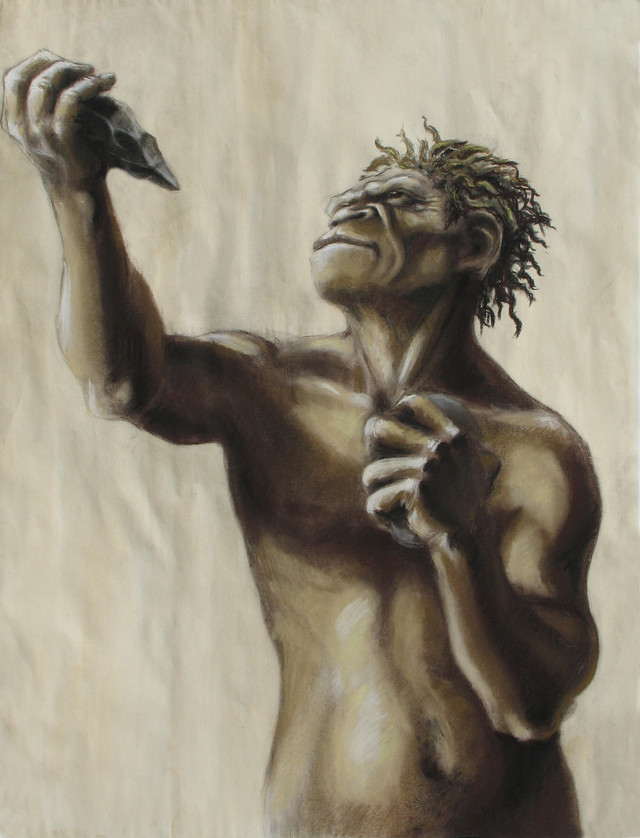 Ergaster are an archaic species of humans whom are well-adapted to their savannah territories, having developed an efficient hunting stratagem that relies on wounding and harrying prey over long distances. Formidable ergaster hunting bands injure large game with thrown weapons or simple traps and then stalk their prey over days until it expires. They are proficient butchers who waste nothing of the animals they slay. While they are enthusiastic meat-eaters, ergaster are knowledgeable gatherers of plant matter.

Personality: Ergaster vary wildly in temperament, but tend to adopt their tribal norms. Most are suspicious but curious about outsiders who approach them with deference, but some tribes are skittish and aggressive.

Physical Description: Ergaster are bare-skinned primitive humans with prognathous ape-like faces. Roughly the same height and weight as a baseline human, ergaster have elongated legs and shorter arms compared to the size of their torsos. Ergaster have wide, expressive mouths and human-like eyes with pupils that can convey direction like modern humans’ can. Their skin and hair are very dark, adapted to the heat and sun.

Society: Ergaster live in large, malleable hunter-gatherer tribes that usually claim natural rock shelters that they make simple adaptations to with branches and leaves. From these home bases, they stake out miles of hunting grounds. Ergaster social behavior includes basic pair-bonding and communal care for infants, elderly, and also the weak and infirm. They have a hierarchy based on experience and virtues beyond brute strength, and are thought to be the first primates to advance beyond the brutal alpha male-dominated social structures of their ancestors.

Ergaster make simple tools and weapons of bone, stone, and horn. While they do not cook, ergaster value fire for its warmth and ability to stave off insects and predators. However, ergaster are typically unable to light fires on their own. When a natural source of fire is found, ergaster will carefully carry it to their lair. The tribe will then maintain a perpetual campfire carefully tended to by an individual elected to do little else. Losing this fire can often spell doom for the tribe.

Ergaster language, such as it is, is comprised of simple one or two word sentences and gestures but they are capable of learning and speaking more sophisticated tongues.

Alignment and Religion: Survival trumps ethical questions, but ergaster are rarely violent unless provoked and do care for their infirm and elderly. Ergaster lack the imagination to process religious concepts and are generally concerned with the here and now. They will follow more sophisticated beings only if their survival depends on it, and may be taught to emulate worshipful behavior.

Names: Ergaster names are more complex than their proto-language might suggest, favoring two syllables of harsh consonants and short vowels. Being a literal people, ergaster names have little meaning outside of simply sounding unique to their ears.

Ergaster are humans with the following alternate racial traits. These abilities collectively replace +2 to Any Ability Score, Bonus Feat, and Skilled.

Slam attack: Ergaster can make 2 slam attacks as primary attacks for 1d3 damage. While wielding a manufactured weapon, an ergaster can also slam as a secondary attack.

Scent, 15’: Ergaster can detect enemies, sniff out hidden foes, and track by sense of smell.