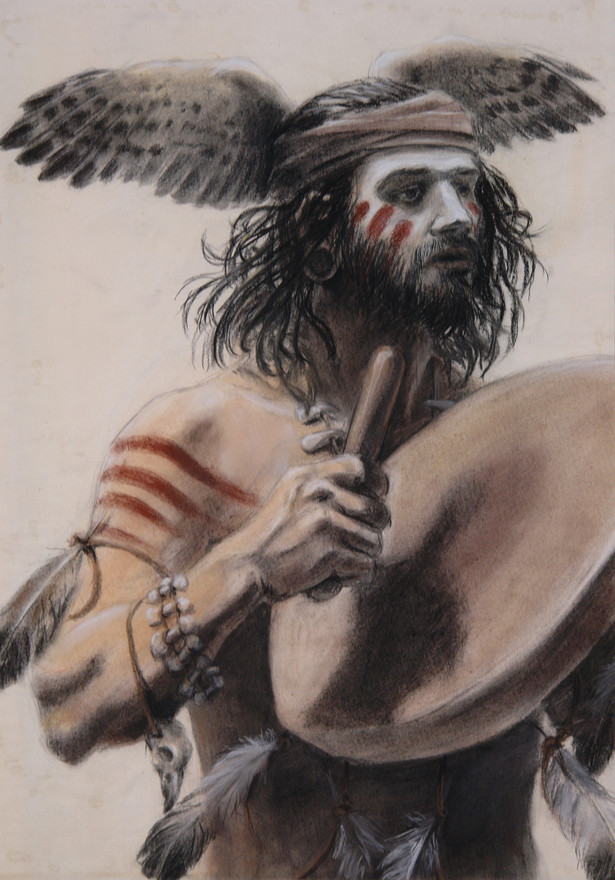 Sometimes referred to as cavemen, or even “dire men,” cro-magnons are the direct and closest extant ancestors of contemporary humans. Compared to other archaic human subspecies, cro-magnons appear incredibly sophisticated and imaginative, only marginally less developed and intelligent than the barbarian tribes of baseline humans. However, cro-magnons are taller, stronger, and more fierce. They are physically adapted to a wide range of climates and conditions.

Personality: Cro-magnons are a fearsome people. Most tribes are skittish, quick to anger, savage and violent, reflecting the dangerous wild lands where they dwell. While it is difficult for them to trust outsiders, or adapt to contemporary society, those that do display a cautious curiosity toward modern wonders, and a great capacity for loyalty and friendship. Emotional to a fault, cro-magnons are prone to wild and sudden swings of mood, and can quickly go from joviality to violent tantrum to brooding. Cro-magnons possess the vocalization capacity of contemporary humans and are thus capable of expressive sounds, mimicry, singing, and laughter—all which they enjoy.

Physical Description: Cro-magnons resemble modern humans, but are taller and more thickly built. The average height for adult females is 5’10", and adult males often stand as tall as 6’5" and taller. Cro-Magnons possess slightly larger craniums than their descendants, with long, fairly low skulls, wide faces, prominent noses, and moderate to no prognathism. A distinctive trait is their wide, rectangular eye orbits. Different cro-magnon tribes display diverse flesh tones, from dark brown to olive, allowing them adaptation to a range of climates. Eye colors are as varied as modern humans, and their large eyes are accustomed to dim light. Their hair is usually dark and curly, which they often straighten or style with animal fat, or wear in braids or dreadlocks. Males grow thick beards.

Like modern humans, cro-magnons have minimal body hair, and they often adorn their skin with crude tattoos and paint their entire bodies, either to afford themselves camouflage and protection in natural environments or to strike fear into their enemies. Cro-magnons also enjoy ornamenting themselves with elaborate piercings and jewelry made of carved shell, bone, and horn.

Society: Cro-magnons possess a highly developed tribal structure, oftentimes more complex and inspired than some of their tribal descendants. They create brilliantly hued dyes from a wide variety of materials and are well known for their elaborate, beautiful cave paintings, jewelry, and figurines. They can create simple flutes and drums, spin flax into cords to produce clothes and baskets, and forge armors of worked leather and hide all of which they dye and color.

Cro-magnons are omnivorous and enjoy many types of leafy greens and fruits, but prefer meat. Like most archaic humans, cro-magnons are primarily big-game hunters, killing large game for food and materials. They hunt with hafted spears, javelins, and atlatls, employing complex traps and ambush tactics to bring down megafauna. They make and employ fire for cooking and smelting. Some cro-magnons can forge weapons and tools of easily worked metals, but most still prefer bone, horn, and stone. They employ basic animal domestication for pets and guard animals, and favor canine companions. Cro-magnons are usually nomadic or semi-nomadic, following the annual migrations of their prey. Famous for appropriating caves and grottoes as temporary living spaces, cro-magnons will erect huts from bones and skins when these are unavailable.

Alignment and Religion: Basic survival informs the ethics of cro-magnon society, but they possess a more highly developed sense of personal freedom and ownership than even some barbaric baseline humans.

Cro-magnons are imaginative and animistic, fond of stylized images and symbols to represent supernatural concepts. They often depict their versions of the gods as anthropomorphized animals or magical beasts. Tribal shamans lead simple religious rituals and offer blessings for major events such as births, hunts, and deaths—the latter of which necessitate burial rites and grave goods. Beyond the graves containing physical remains and materials to take into the afterlife, cro-magnons often build small shrines to the deceased. They place these along their migratory routes so the spirits of their loved or admired kin can keep up with them. Cro-magnons maintain these memorials fastidiously, and are unforgiving of any who would vandalize them.

Names: Cro-magnon names are lyrical but simple, befitting a passionate and artistic people.

Cro-magnons are humans with the following alternate racial traits. These abilities collectively replace +2 to Any Ability Score, Bonus Feat, and Skilled.

STR +2, WIS +2, INT -2, CHA -2: Cro-magnons are big, powerfully built and intuitive, and only marginally less intelligent than baseline humans. Their moodiness and irritability makes them difficult to relate to.

Weapon Proficiency: All cro-magnons can effectively utilize an atlatl.

Slam attack: Cro-magnons have big hands and strong bones. They can make two 1d3 damage slam attacks as primary attacks. While wielding a manufactured weapon, a cro-magnon can make one slam as a secondary attack.