Fight With All Your Mites

History is written by those who have hanged heroes 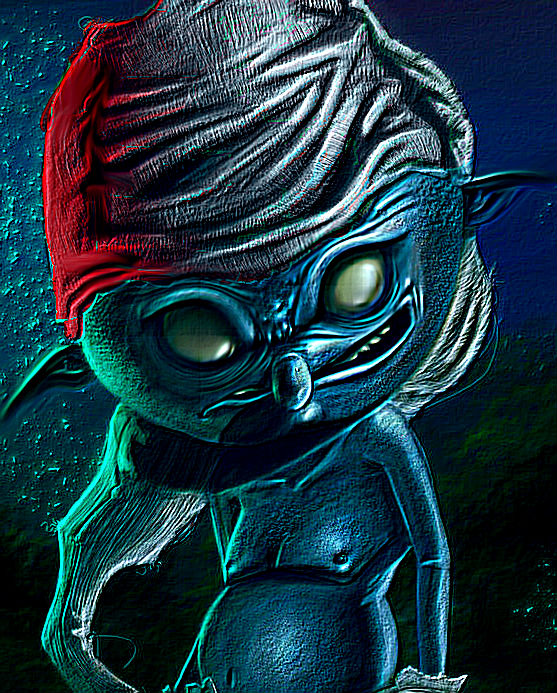 Our heroes crossed the wobbly, web-woven bridge to the ledge before the maw of the mites’ lair. They were faced by a crude stick portcullis blocking entry, but the winch and pulley made to raise it was visible on the other side in the shadowy foyer of the cavern. The posted guard, out of ammunition due to Monica and Dornas‘s magical trickery, had run back into the blackness further down the cave, shouting an alarm in the Klixarpillar’s crude pidgin of Sylvan and Undercommon, “Alert! Intruders! They are here!”

Nemanji charged the barricade of staves, intending to burst through and give the mites a good scare, but was surprised to find the gate stronger than it appeared, for it held true; which gave the slightly embarrassed tiefling nothing but a sore shoulder for all his strength.

The mites were quick to arrive in force, five more feisty fighters and the gate guard—re-supplied with arrows. Their apparent leader, an elderly mottled mite the invaders guessed correctly was Tlukkah, lingered in the shadows behind his younger gremlin warriors. His eyes were wrapped in cloth, and a hive spider skittered on his shoulders. He betrayed his identity by the tone of his voice, the same voice that had promised the adventurers and their Mongrukoo cohort a grisly death, a voice that beseeched his god for a blessing that bathed his bodyguards in divine light.

So consecrated, the mites fought like demons. Arrows, bolts, and sling bullets streamed back and forth through the portcullis, though few found purchase in their targets, and the mites’ First World flesh proved highly resistant to conventional weapons. The nasty fey focused their bulging eyes and attempted to heap their inborn ability to curse foes with fear upon Kor’lec—the druid was the closest caster-looking foe who commanded a dangerous companion in the form of the velociraptor Kai. The mites probably reasoned that removing the half-elf from the field would rid them of two opponents. But Kor’lec, though he felt the effects of the compounding curses, kept his composure.

Still, the sensitive Kallijae found himself privy to the collective consciousness of the Klixarpillar, who were fueling their magic with their own memories of terror: Kor’lec saw brief visions of child mites taking drafts of a potion of invisibility, from the same large decanter that Kishtari‘s homunculus Naga dragged out of a tunnel in the cricket cave. The medley of scenes shaped a narrative of the mites’ lair being invaded by terrifyingly huge monkey goblins who were killing everything in their path. The matronly mite who gave the six children their invisibility potion was gruesomely cut down by laughing goblins while the little mites fled unseen through the tiny tunnel.

Kor’lec may not have been frightened by the mites’ magic, but his eyes were opened wide. Realizing the druid was far too strong of mind, the gremlins turned their flashing peepers toward Nemanji at their master’s order. The barbarian proved far more susceptible and was subjected to a vision of mite genocide. Though he was shaken by the mental intrusion, Nemanji’s opinion of the Mongrukoo held firm. After Likki used a protective spell on Kishtari, the demonic barbarian invited the goblin oracle to piggy-back on him throughout the battle.

Attempts to move the winch and raise the gate proved futile—even by the archeologist with a whip—but Nemanji finally smashed the damn thing down. Dornas magic-blasted his fey foes with a cone of crippling colors, but only one succumbed. The paralyzed mite’s throat was hungrily chomped down on by Kai. The remaining mites fell back into the darkness, though one was left grappled in Nemanji’s ape-like arms. However, the Klixarpillar were smart enough to cover their retreat with another swarm of hive spiders, whose slow advance elicited groans of aggravation from the heroes.

By this time, Dornas had proceeded furthest in the tunnel, and found himself engulfed by the arachnids. Though he suffered some painful bites, the magus was able to get away before the spiders could chew off anything… vital. Nemanji tossed the mite into the swarm, hoping to slow the bugs down with a free lunch, but the little blue bastard just ran right through and escaped to the safety of the tunnel depths.

The heroes tactfully withdrew to the entrance of the cave, and set up to saturate the nucleus of the swarm with oil and ignite the creepy-crawlies with torches. Likki proved most adept with his torch-play. With a little caution and persistence (and a lot of fire), the hive spiders were finally dispersed.

The magic-users of the group (everyone but Nemanji) began to sense a strange and powerful force coming from the left, which they identified as a telepathic-enchantment effect. Kishtari sent her psionic construct further down into the dark cavern to reconnoiter, but it made it about thirty feet before plummeting into a pit covered by dusty webs. The crystal serpent shattered into pieces in the pit’s bottom, and Kish reeled from the effect of losing a piece of her soul, even if the effect’s temporary.

Nemanji offered to scout ahead, his demon eyes unclouded by the gloom of the cave. He stopped at the ledge of a small decline that preceded a fork in the tunnel—one branching left to a large, web-filled chamber and the other continuing forward and down. At the entrance to the chamber of webs a hive spider was chewing on a goblin skull until Nemanji shot and killed it. “Your friends are dead,” said the tiefling. Likki reminded his big buddy that the heads of the goblin dead were taken by the Klixarpillar from the ambush site, but the captives were likely still alive despite the lengthy respite the would-be rescuers took in the cricket cave. “The Klixarpillar would use them for leverage,” the monkey goblin noted, “though they will have been tortured.” And in a declaration that educed suspicion from his new friends: “any Mongrukoo would pull out his own guts if he could strangle a Klixarpillar with them.”

It was apparent that the mites didn’t retreat into the web chamber, and most of the party were keen to pursue. But Kish and Monica made an argument for checking out the web chamber, clearly the source of the ancient, doubtlessly evil magic power they all detected (except Nemanji). “Maybe we can use it!” Kish reasoned. “It is important to my research!” Monica contended. “Yes, maybe later,” Dornas said flatly, settling the matter.

Apparently, it was now Kor’lec and Kai’s turn to scout ahead, though the half-elf’s eyes weren’t quite as adapted to the dark, his theropod companion’s sense of smell compensated. But the chamber where the mites had retreated for their final stand appeared around a bend sooner than expected, and Kor’lec found himself standing right at the entryway without having first doused his torch.

The battle was on! The mites jockeyed for position and opened fire with their little bows, attempting to keep some distance from the invaders in the tight quarters. Monica distracted them with an illusion of Mongrukoo ninjas rappelling down a rope in the ceiling, that drew their fire long enough for the heroes to close into melee.

Tlukkah cast some protective magic that was hopelessly ineffective against the less-than-lawful castaways, and disastrously ineffective against Likki. The Abyssal-chanting goblin, bone dagger and torch in either hand, leapt off Nemanji’s back and onto the ledge the elderly mite was on. His fang-filled face transformed from ugly-cute to downright predatory. Meanwhile, the castaways were making short work of the unsightly gremlins. Kishtari caught one point blank with a psionically-manifested crystal shard and wiped the ugly from his face by wiping off his face. Nemanji found that their resilient flesh nicely contained bones and interior organs from splooshing all over when the dark fey were smashed flat with a club, and Kor’lec followed suit by enhancing his staff with druidic magic and caving in a skull or two.

After taking a few shots, having his pet spider killed (which Dornas correctly surmised served as his eyes) and having Likki’s torch extinguished in his sallow chest, old Tlukkah just about had it—only to reveal that strapped under his cloak was a crude suicide bomb made of tindertwigs connected to sacks full of blackpowder and nails. The thing was inadvertently armed by Likki’s attack, and fizzed and sparked ominously. Monica prayed that someone prepared a cantrip to produce water. No one had. The foul old fey cursed and spat at Likki, “I die happy knowing I’ll take you with me, spawn of Grougak!”

Thinking as one, Dornas and Kishtari called upon the wild underpinnings of their respective mystic sources— Kish unleashed a sudden psionic lash that launched the old mite upward as if gravity was somehow upended, as Dornas let loose a freezing blast from his fingertips that trapped the exploding gremlin to the rocky ceiling beneath sheets of ice.

The last functional mite limped into the final chamber, where the adventurers assumed the captives were held, but Likki was right on top of him, and blocked his path before the others finished him off.

The Mongrukoo captives were still alive, barely, crucified to wooden crosses with their eyes pried out. Likki prayed to heal them but their sight and sanity were gone. The heroes searched the immediate chambers for valuables, and discovered some useful salvage in the storeroom where the hostages were kept, and some jewelry and weapons in a trunk on the ledge in the room where the mites slept. On one of the sleeping mats was a scroll, the blood used to scribe it still fresh1.

One of the gremlins, critically wounded, was coughing out his last breaths. Likki turned toward him with a sharkish grin and a raised coconut in hand. 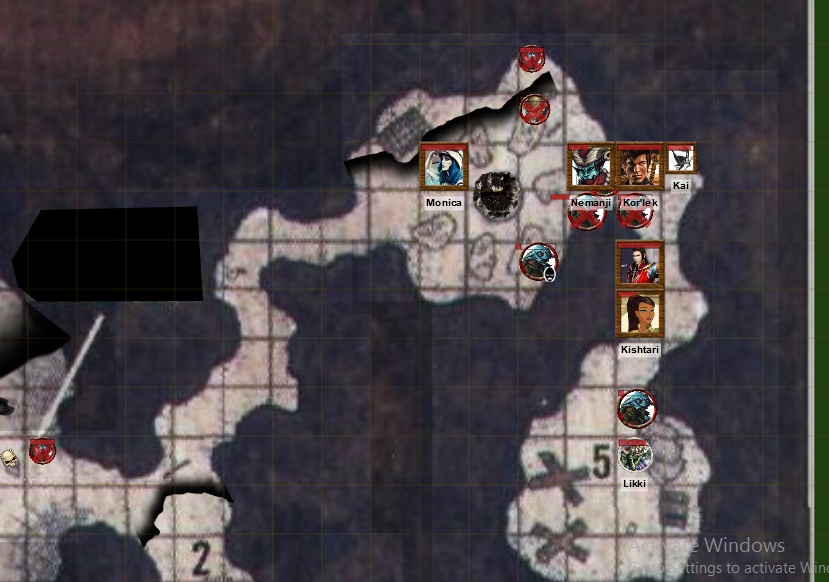 1 A scroll found among the dead, scribed in Undercommon in the writer’s blood. The choice to read it is yours. But oftentimes, in the world that adventurers find themselves, necessity demands shrewd choices, and ignorance is… if not bliss, than at least lets one rest at night.

Scroll Found Among the Dead

“The last functional mite limped into the final chamber, where the adventurers assumed the captives were held, but Likki was right on top of him, and blocked his path before the others finished him off.”