Until its discovery on the island of Smuggler’s Shiv by its legendary Castaways, the Typhonian Proposal was only known from a cited quotation in an infamous occult treatise known as the The Alaberos Analects. The multilateral Aklo text and accompanying glyphs were discovered on the walls of a hexagonal ceremonial chamber in a remarkably well-preserved serpentfolk temple. Restored and translated by Monica Montana and Dornas, the Proposal presents the testimony of a serpentfolk high priest — Typhonia — and the occult rituals used to activate five mighty magical obelisks elsewhere on the island (once a peninsula). The text suggests that each of the stones was controlled by a serpent lord and the five are briefly eulogized by Typhonia beneath the corresponding rites. A final inscription appears to be a parting message of the high priest, and the saying is nearly identical to the quotation in the …Analects.

The purecaste serpentfolk Ieana managed to gain access to the trapped and secured sanctum first, but at some cost — as shown by the scorch marks, blood stains, and empty healing potion flasks in front of its hidden door. The villain had left her key — the psionic fang dagger — aboard the Jenivere which eventually ended up in in Kishtari‘s possession. Once inside the sanctum, Ieana cleaned the detritus from the ritual instructions for the Tide Stone previously mentioned in her annotations in the Esoterica of the Isles of Desperation Bay. The other walls and their secrets were untouched, demonstrating Ieana’s interest in that particular obelisk beyond mere scholarship.

The Castaways quickly connected the Beast Stone they’d discovered in the Hive Queen’s caverns to the monoliths and the sources of psychic power vaguely described by Aycenia. 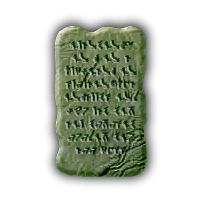