Serpentfolk artifact allowing for the control of Smuggler's Shiv's shoreline

This stationary artifact was found on an bluff near the long extinct volcano “Red Mountain,” the highest point of elevation on Smuggler’s Shiv. According to the text discovered by the Castaways in a serpentfolk temple, it was used to control the level of the shoreline and activated by ritual magic. According to the Typhonian Proposal, the effects of the ceremony allowed the artifact to scuttle incoming ships and “eschew what lies below,” a reference to a subterranean holding under the volcano. The Proposal purports that the stone was controlled by the serpentfolk called Myrissa, Lord of Waves, whose sanctum one can reasonably assume was the very same ruin revealed by the Tide Stone. Later in pre-history, the retreat was taken over by Azlanti cultists of Zura.

The Tide Stone was activated in 4716 by Ieana, to access the sanctum of Myrissa, and a day later by the Shiv Castaways who managed to successfully complete the ritual by invoking Nethys’s name instead of Ydersius, whom was named in the text. 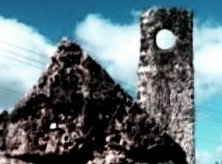