Shaved bald head, grey eyes that while they seem to pierce have a certain honesty and warmth about them. His face is a ruddy color and while he usually talks with a grin or a smirk, there is a kind of deeper thoughtfulness. Quick with a joke and honest of word, Tyst says what he thinks and does not hesitate to act on what he feels is right.

Once there was a young halfling, small and nimble as many of his kind are he rarely felt any difference between himself and the others of his kind he had known. But even though he enjoyed the comfort of the halfling way of life, there was always a feeling of inadequacy toward the big folk that he saw. Why could he not have their strength? Their bravado? These questions always nagged at the back of his mind but never fully came forth. How could he? He was only a halfling after all.

Years passed and he finally came near his 20th birthday, and Tyst, who had been working as a simple cook, received a note that he was to cater for a group of performers from the east who were passing through town. Upon his arrival he found the kitchen empty and heard the sound of cheering and clapping from the next room over “Pfff performers” he thought out-loud. After looking around for some time he discovered a significant lack of knifes in the kitchen, sighing to himself he went out into the main room of the tavern to find out what had happened to his tools. What he saw when he came out took his breath away, there in the middle of the room was a bald halfling in loose black garb leaping about on and off his hands flipping this way and that. Upon further inspection Tyst noticed something in his belt, his cooking knifes. Infuriated by what he felt was a grievous misuse of his tools, Tyst began to weave his way through the crowd toward the halfling. Just as he began to reach the edge of the crowd he saw something whizz by in a flash and heard a sudden thud on the wall opposite the leaping halfling, he was throwing his knives! Tyst jumped into the open space as another knife whizzed by, he glared at the halfing and began storming toward him. Another knife and another thud, but Tyst strode on. Another this one brushing the hair on Tyst’s head, another thud. One last knife remained, and the performer looking frustrated at the interruption of his show threw one last knife, this time aimed for Tyst. Tyst saw the blade coming and, in one motion moved slightly to one side and grabbed his knife from the air by the top of the blade. “These are made for cooking!” he yelled, turned around and retrieved his remaining knifes and returned to his kitchen.

An hour or so passed and Tyst, having finished dinner was now cleaning up. Suddenly he felt he was not alone, spinning around he saw the performing standing in the corner of the kitchen with a smirk on his face. “Good job tonight” he said still staring at Tyst. “Well it would have been done sooner if someone hadn’t been using my knifes as darts” replied Tyst returning to his work. “You misunderstand me” said the halfling “I’ve eaten better food, but not many could dodge a knife I throw, let alone catch it”. “It was nothing…” said Tyst. “Not to me” said the halfling “My name is Ni and, and to be blunt, I have an offer for you” he said standing straight and looking suddenly very serious. “And what might that be?” said Tyst trying to look uninterested but still unable to hide his slight level of unsettledness. “I would like you to come with us, travel with us that is. Back to the east, back to my country” said Ni. “What?! Why would you want me? I’m just a cook!” Tyst said looking at Ni confused and shocked. “Because I know what you feel, I can see it in you. You look at the big people and think ‘Why can’t I be like that?’ well you can, and my master and I can teach you.” said Ni still staring at Tyst. “But what about my life here? What about my family and job?”. “Leave them, your family will understand in time, and as for your job…” Ni looked around and raised his eyebrows at Tyst “Let’s just say they will survive without you.” Tyst stood there silent. “I tell you what.” “I’ll let you answer tomorrow, meet us at our carriage before sunrise if you want to be something bigger than what you are.” and with that he left.

A long night passed and Tyst sat in his room without sleeping, he knew what Ni had told him was right but he couldn’t imagine just leaving. But then the words came back to him “You can” and with not much more thought, he made his decision. That morning he waited by the carriage, and just as promised the troupe came out, there as a large half orc man, an elf carrying a lute, and at their forefront, Ni. When he saw him Ni smiled “Looks like we have another member troupe!” and with that they were off. Starting the journey toward ‘bigger’ things, to show everyone he could be just as big even if not in size. 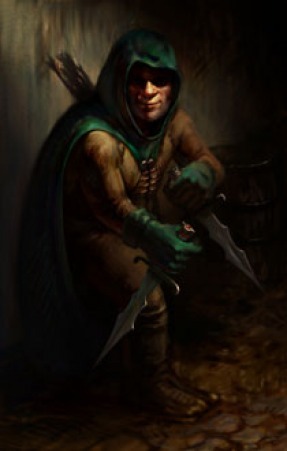