A dark-skinned elven woman approaching middle-age, dressed in bones and skins. She exudes authority and wisdom.

Head priestess and princess of the Emerald Star tribe of the Kallijae wild elves, Salleh’thiel is Kor’lec’s mother (and mentor) and daughter of the chief.

Salleh typically contacts her traveling son through his dreams, but is unusually cryptic when she does so, perhaps as a side effect of the sending, as a way to test Kor’lec’s training, or simply because presenting an air of mysticism is a long-standing habit.

Salleh contacted Kor’lec as he was traveling across Avistan in search of his missing father. Guilty that she allowed her son to travel so far and wide for so long, Salleh admitted that she had an idea what might have happened to the man.

The man was an adventurer who attempted to seduce her for information on an ancient tribal secret—the location of an aiudara or “elf gate," a portal to the planet of Castrovel. To her great shame, she revealed the information to the outsider, but in doing so sent him to die—for the portal was deep in the territory of their tribe’s ancient enemies, the Spawn of Angazhan. Upon learning this, Kor’lec arranged transport back to the Expanse.

The druid’s betrayal has since become known to the Emerald Star. Salleh’thiel’s position is currently uncertain. 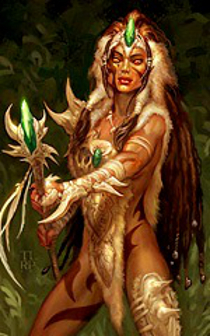