Reincarnated fey, messenger of the Spirit of Smuggler's Shiv

Perched on the prickly legs of a spider cricket, this tiny blue-skinned creature has gossamer wings and the upper body of a knavish fey male.

Pollock was a grig, and before that a mite inadvertently reincarnated by a latent magical amulet belonging to the druid Kor’lec. His small tribe of mites were the last survivors of a war with the Mongrukoo monkey goblins of Smuggler’s Shiv — a conflict that the Castaways helped decide in the goblins’ favor.

Given a new lease on life, Pollock swore to avenge his mite brothers and adopted father Tlukkah on the Mongrukoo, specifically, his own killer, Likki. However, the grig was drafted into the service of Aycenia, a suffering dryad who sought Kor’lec’s assistance in removing the Abyssal blight on the Shiv’s northernmost islet. Perhaps exceeding his directives, Pollock refused to bring the druid and the dryad together unless he was allowed to indulge his thirst for vengeance — a condition Kor’lec and the other Castaways would not abide. Likki, however, insisted on the duel, though he was able to convince Pollock to abandon the age-old grudge.

At some point following the Castaway’s first visit to Aycenia’s grove, Pollock fell under the control of Ieana, who commanded him to bring her Kor’lec’s reincarnation amulet. After he was tricked by Monica Montana into thinking the amulet was destroyed, Pollock killed himself. 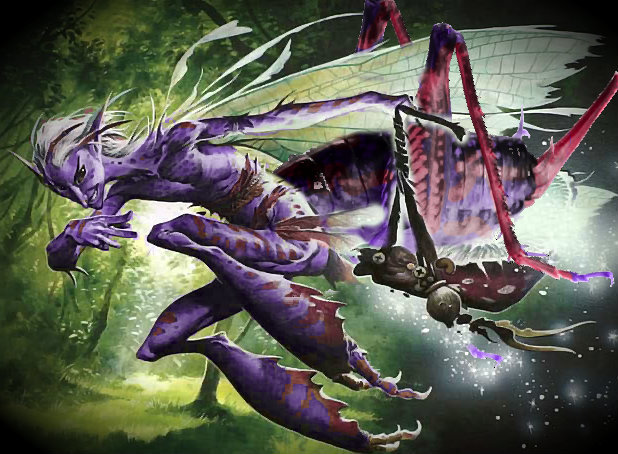