This bird-like humanoid scrutinizes you carefully with his avian eyes, bobbing its head and rubbing the hilt of his serrated sabre.

Pezock the tengu was the last remaining survivor of the Crow’s Tooth, a Red Mantis vessel with unknown business that scuttled on the southern edge of Smuggler’s Shiv’s large lagoon. After surviving the wreck and then, a week later, surviving an attack on the Crow’s Tooth camp by the island’s cannibals, Pezock became somewhat unhinged. In an attempt to hide from further attention, he moved into the shell of an immense crab. At the time, the giant vermin had only been dead for a few days—Pezock helped the local scavengers clean it out, and rigged the shell with a number of ropes and pulleys scavenged from shipwrecks.

He was generally friendly and accommodating whenever the Shiv Castaways passed his shack, glad for someone to talk to besides the local shellfish. Though he claimed he was the Crow’s Tooth’s first mate, it is more likely he was the ship’s mascot.

Pezock possessed a magical sawtooth saber he claimed was given him by the captain of the Crow’s Tooth. The tengu was never without the blade, and frequently could be seen addressing it as if it were intelligent.

Pezock was discovered dead as the Castaways were making preparations to leave Smuggler’s Shiv aboard the Red Gull. It appeared the bird-man had picked a highly venomous form of nudibranch as his dinner. Suggesting some sort of fowl play was the absence of Pezock’s saber — missing from his person and from the shack. 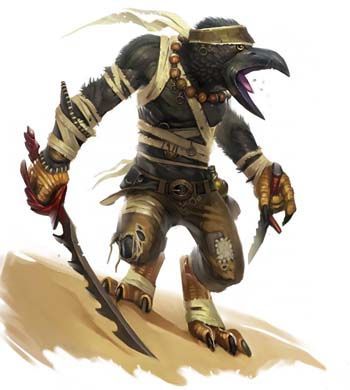