This creature has the wide head and toothy mouth of a goblin with dappled green skin, simian hands and feet, and a long, ratlike tail. He has drooping gauged ears and a thick bone septum piercing.

Likki was a rare creature, a tolerant goblinoid whom the Castaways picked up on Smuggler’s Shiv and accepted and defended as a full member of their party. Once, the fragile oracle remained in a wicker creel strapped to Nemanji’s back with his endless coconut supply. Later, Likki would prove fearless on the battlefield, invoking his own idea of his tribal cannibal baboon god to provide curative and abjuration magics for his friends.

Likki’s the son of the Mongrukoo’s tiefling chief Basako and younger brother to Cenkil. His grandfather was the bloodthirsty Grougak the Howler, a half-demon who made war on the neighboring mites of Black Widow Bluff, enslaving and nearly slaughtering them all. Likki’s grandmother was an unknown entity, but the oracle suggested that she traveled along with him somehow (guessed to be one of the coterminous planes) and helped him work his magic. Likki sometimes received snippets of words and ideas from his secretive ancestor, but preferred not to allow her to speak to him outside of that — the entity required “vessels” to possess for that to be possible, and this possession was nearly always fatal to the host.

Likki’s demonic ancestry manifested itself only in his oracular capacity, when excited he babbled in Abyssal and adopted a cruel expression belying his normally adorable front.

Befitting a chief’s son, Likki had several wives, female monkey goblins that were mostly all sacrificed in order to consult with his grandmother, an act the otherwise conscientious goblin was never able to justify. He was allowed to retain one of his brides, named Vershnat, who would go on to give birth to Likki’s son, Nemanji II.

Likki was braver than most of his monkey goblin kin and curious about the wider world. He joined the Castaways while still very young and remained skeptical that there were lands beyond the surf surrounding his island home until traveling to them. Likki was unprepared for the sheer size of the world he was entering, never quite understanding why they never quite reached “where the sea met the sky.” Likewise, he was confused as to why his heritage and deeds would fail to make an impression on the “wreck-born” (a Mongrukoo term for the free meat, i.e. people, that sometimes washed up on shore of Smuggler’s Shiv) of the wider world.

More charming and philosophical than any goblin anyone was ever likely to meet, Likki was also considered lazy, strange, and obstinate by his tribemates. He had a low opinion of the method of The Mongrukoo’s worship of their traditional god, Mechuiti, rejecting the bloody rituals to him presided over by goblin witch doctors. Likki holistically saw the baboon demon as more of a metaphor for nature itself—brutal and beautiful. He had little in common with his warrior brother, save a mutual understanding that persons other than Mongrukoo were something other than food that sometimes tried to make conversation.

Likki saw Nemanji as the “son” of Mechuiti, though he has never explained how or why. He was particularly crestfallen to learn of the tiefling’s loss but latched on to Kishtari, his “Big Sister” (on account of the psion’s brief “engagement” to Likki’s brother).

For all that he was sometimes distracted and tickled by schadenfreude (not unusual among goblins), there was one cruelty that he felt particularly bad about. After the final conflict with the mites of Smuggler’s Shiv, Likki sadistically crushed the skull of the last mite, Pollock, over a period of minutes. Though Monica and Dornas were hesitant to allow the Mongrukoo to travel along with them, Nemanji insisted the monkey goblin’s services be retained by the party.

Other than the occasional protective or curative spell and thrown coconut, Likki at first contributed little in the frequent conflicts the adventurers found themselves embroiled in. However, the goblin’s cuteness and charisma, even when describing his tribe’s cannibalistic tendencies, quickly won everyone over. His simplistic tribal anecdotes were likewise treasured by his companions, who allowed Likki a full vote in proceedings and an equal share of any loot they recovered.

Even Monica and Dornas accepted him fully, especially when Likki demonstrated terrible regret and honor after he was confronted by the reincarnated mite Pollock, who’d returned from death as a powerful grig bent on vengeance. Likki agreed to a duel with the fey that the goblin had no hope of winning. When Likki was about to lose, he stopped his intervening companions from killing Pollock. Likki somehow convinced the grig to abandon the grudges of the past and embrace his new lease on life.

After the Nightvoice affair, Likki’s confusion over the wider way things worked reached a tipping point. The monkey goblin had a very literal idea of gods, and his companions’ destruction of the Fungus God tested his worldview; especially his own role in the battle and his fellowship amongst those capable of deicide. The oracle left the Castaways, vowing to return after he’d consulted with his mysterious grandmother.

Likki triumphantly returned to the Castaways in the battle against the Thrunefang cannibals. Signalling his return with a coconut hurled at the tribal witch’s familiar, Likki nearly perished keeping the old spellcaster distracted and also on fire.

Likki would explain that his grandmother counseled him to throw in with the Castaways permanently, and that he was to make his legend alongside them. The party did not hesitate to embrace the idea, preferring to meet the challenges of having a goblin companion — particularly one with no idea how goblins were perceived in the larger world — as they came. 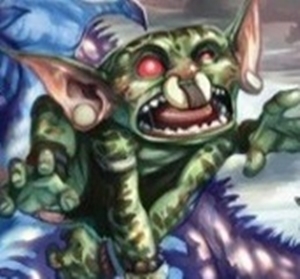