Chief of the Thrunefang Cannibals

A trim, barrel-chested human man, presumably in his 30’s and of Avistani descent. Has a long topknot of braided and tangled red hair, and tribal serpentine tattoos cover his face, neck, and arms. Wears makeshift lamellar armor festooned with horns, skulls, and tribal fetishes. Carries a magical scimitar and a calm, if predatory, expression on his face.

Klorak was the Thrunefang tribes’ seventh chieftain, assuming the role after his father. Called Klorak the Red as much for his red hair as for his penchant for glorying in the feel of his enemies’ blood on his skin, the cannibal chieftain possessed a bloodstained scimitar in remarkably good condition (thanks to its magic) despite the passage of decades.

As chieftain, Klorak occupied the lighthouse with the tribe’s women in relative luxury. The duty and honor of fathering the tribe’s children were his alone, but no children were discovered in the encampment. A Thrunefang barbarian implied under interrogation that their chief was unable to produce healthy offspring.

Aside from eating other humanoids, Klorak and his wives enjoyed the pleasures of smokable narcotics, including at least a large stash of opium and pesh.

The enchantress Ieana slipped into the Thrunefangs’ camp and quickly assumed control of the tribe by dominating Chief Klorak. Having already inferred the Castaways’ general locale, Ieana commanded hunters to seek and destroy them. After her business was concluded in the sea caves below the camp, Ieana up and left — leaving Klorak enraged and vengeful when he recovered from her dominance.

Ieana’s sudden abandonment of the Thrunefangs didn’t curtail their zealous hunt for the Castaways. A large group found Jask alone on the Brine Demon, a haunted site they once avoided. They captured Jask and the Castaways’ treasure trove before destroying the ship. When the hunters returned with their prizes, Klorak confiscated the treasure and ordered Jask pilloried and “tenderized” for a midnight feast.

Eating a divine vessel such as a cleric required special rituals that seemed to the Castaways little more than an excuse for Klorak to indulge his vices. Even so, those vices bought Jask enough time to be rescued, and the Castaways decimated the Thrunefang tribe in the process.

Left chief of very little, Klorak coolly negotiated a proviso peace with the Castaways, and temporary use of the tower beacon in exchange for Ieana’s remains.

Klorak received news from some of his scouts that the Castaways and their allies were headed to Red Mountain, where he assumed the group would be facing Ieana. He also assumed that should the group emerge victorious, they would be easy pickings for the forces he had left.

The remaining Thrunefangs, including himself and his barbarian brides, found the group’s friends Jask, Aerys, and Gelik waiting at the Tide Stone. As the trio were weakened by the ritual that enabled their allies to enter Zura’s sanctum, Klorak decided to take them hostage, and arranged his force around them. When the Castaways did finally emerge, Klorak smugly announced that their existing ceasefire would need to be renegotiated.

Kishtari wiped out the last of Klorak’s tribemates in an instant, by manifesting a circle of fire on top of the circle of Thrunefangs — leaving the hostages safely in the center.

Klorak himself avoided the worst of the flames, and was patted down by his most hated foe, Dornas. The magus informed Klorak that his fate was for the island’s new masters to decide, just as Cenkil and a horde of Mongrukoo showed up.

While the monkey goblins were also cannibals, the Castaways had long decided that their allies were relatively innocent because they didn’t like to waste meat. And they were certainly happy for the feast. Klorak was taken to the goblins’ village and strung up for coconut throwing practice, so he wouldn’t rot, and also because the goblins got a kick out of eating the leftover Thrunefangs in front of him. In the end, Klorak received what he amounted to: 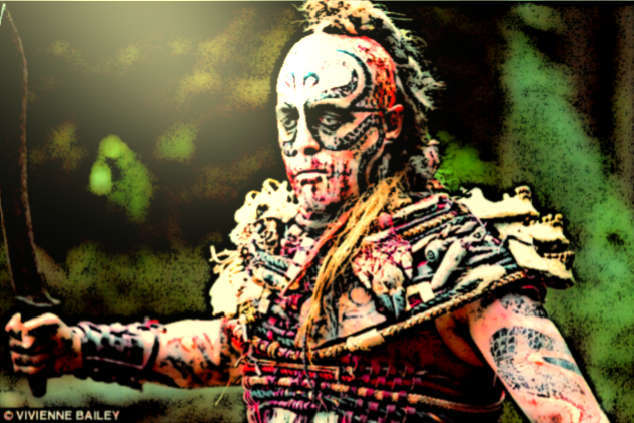