Waist high to a human, this burly large-headed “halfling” has short cornrowed hair and an almost manically friendly look on his expressive face. He is wearing an impeccably white kitchen uniform

Ilton is an overly large brownie that normally poses as a halfling. He owns and operates a popular restaurant in Bloodcove called Dangerous Game on Rotten Plank Row. Here the corrupt fey specializes in preparing all kinds of bushmeat, and he is known to pay good money to hunters for rarities to serve to his ever-discerning clientele.

To the underworld, Ilton is notorious as a cleaner and killer-for-hire. He’ll pretty much make anyone disappear if his odd, whimsical requests for payment are made in full. He specializes in leaving gruesome tableaux vivants should his clients prefer to send a message. Ilton never leaves intact corpses however—if the job needs him to leave anyone at all—and no one ever finds the missing remains.

But those who know that this gourmet chef is also an assassin speculate—quietly—on where the corpses end up. Meanwhile, in the decadent and cutthroat climate that Bloodcove affords, Ilton’s business is booming. 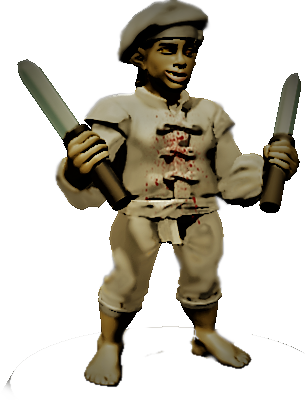