What once masqueraded as a nondescript Varisian woman is revealed in all her ophidian glory. Ieana, or Yarzoth as she’s known to her own people, appears in her natural form as an sea-green scaled serpentine bodied creature, humanoid from the waist up, with prominent reptilian ridges over her eyes and across her head from front to back. She has three small writhing gold- and brown-patterned snake tails emerging from the back of her head in a manner suggesting hair.

The villainous Ieana was strongly suspected of orchestrating the wreck of the Jenivere on the island of Smuggler’s Shiv, a crime that claimed the lives of dozens of sailors and marines. She possessed powerful mind-control abilities and worshiped the ancient snake god Ydersius. This, all discovered on the wreck by a small, ragtag band of survivors, was enough for that group to unite in seeking her out.

Evidence later exposed Ieana’s true identity as a purecaste serpentfolk named Yarzoth, the first of her kind known to be active on Golarian’s surface for aeons.

One of the passengers on the galleon’s fateful, final voyage, Ieana appeared to most as little more than a bookish Varisian scholar who tended to keep to herself. Ieana was thought to be traveling to Sargava to explore the ancient ruins there, and despite her humble background, enjoyed rather lavish accommodations aboard the ship, such as her own quarters. Rumors aboard the ship alternately suggested that she was the Jenivere’s owner, a Chelish agent, or Captain Kovack’s secret lover. Ieana grew more intent on her studies with each mile the ship traveled closer to Eleder, with only a few notable run-ins with the other passengers.

One of these encounters was with the druid Kor’lec; Ieana took an inordinate interest in his velociraptor companion, Kai. Ieana doted on the creature and appeared able to communicate with it.

The morning after the galleon ran aground on the rocks of Smuggler’s Shiv’s northern coast, a still catatonic Kor’lec dreamed that he was seeing through Kai’s eyes, and that the dinosaur was compelled by Ieana to protect itself from the coming disaster in the ship’s aft storage room, where cages for exotic animals were kept. Meanwhile, the other survivors were fending off a small swarm of sea scorpions, and the effects of a poisoned meal that was served them at the previous night’s dinner with Captain Kovack.

Investigations by Kor’lec, Kishtari, Monica Montana, and Dornas aboard the scuttled ship revealed that the Captain might have been magically compelled by Ieana into assisting her. But the most damning evidence against the “Varisian” were the things found buried beneath the rubble in her quarters. By a broken altar were discovered pieces of an unholy symbol to an evil snake god. Even more compelling, margin notations—written in Aklo— in a book about Smuggler’s Shiv referred to structures there unknown to conventional scholarship. These notes likewise had a telling term inferred to mean humans—“warmbloods.”

Ieana proved an elusive quarry to the surviving Castaways, remaining ahead and appraised of their movements through mind-controlled spies, at first utilizing Kor’lec’s dromaeosaurid companion and later the grig Pollock. She infiltrated the Thrunefang cannibals and put them on the hunt for the Jenivere’s survivors. Ieana delved in the caves beneath the barbarians’ camp to retrieve something from an old serpentfolk temple buried there. Her pursuers would later discover a secret chamber in the temple possessed the ritual instructions capable of activating the Tide Stone, allowing access to an old serpentfolk sanctum. After abandoning Captain Kovack to the cavern’s ghoul population, Ieana was on the move again, allowing the Thrunefang’s chief Klorak to regain his senses and swear vengeance for his bewitchment.

The Castaways chased Ieana to Red Mountain and used the Tide Stone ritual to follow her into the secret sanctum. They discovered the stronghold had been repurposed by later-period Azlanti cultists of Zura to serve as a temple to their own vampiric god. After liberating Tyst from her domination, the Castaways discovered she was not looking for something left behind by the temple’s older serpentfolk inhabitants, but information recorded by the Zura cultists. Ieana had learned the cult were exiled from Saventh-Yhi, a legendary Azlanti city long assumed by historians to be fictitious — and had recorded a means to return there.

Before her humiliating defeat and destruction at the hands of six random persons she managed to piss off, Ieana was vague about what she wanted precisely from or in Saventh-Yhi. She couldn’t have had much use for the academic fame of finding it, and also seemed certain that the yuan-ti and their interstellar imperium could not be stopped from returning in spite of anything she was up to.

Ieana’s Aklo notes proved difficult to translate on account of the telepathic species’ multilateral thought processes and tendency toward self-reference, images, and metaphors. Dornas and Monica began study while traveling , though the going was slow considering the commotion aboard the ship and the mayhem perpetrated by their teammates. 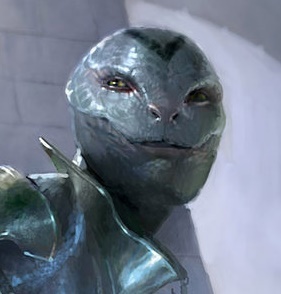