This old, but fit and lanky goblin has green-grey skin, tufts of green hair, and the air of an aristocrat. Rather than the opposum-like tail possessed by his heirs and subjects, his is whiplike and ends in a fiendish barb.

Basako was the chief of the Mongrukoo of Smuggler’s Shiv, and father of Cenkil and Likki. He was a tiefling, the son of Grougak the Howler — who was a goblin half-fiend — and an unknown demonic consort. Basako possessed a low, cynical opinion of his goblin subjects, their religion, and their understanding of the world beyond the Shiv—but Basako was a sharp statesman who encouraged their superstitions and ignorance to keep the tribe functional.

Basako allowed his son Cenkil to assume leadership of the Mongrukoo, rather than engage in a death duel, a decision that required him to abandon the Mongrukoo’s old territory. With a small band of loyalists and his youngest son’s wife Vershnat, and child Nemanji, Basako headed to the opposite side of the island where he intended to retire in luxury and semi-seclusion in the abandoned lighthouse. As his chosen retreat neighbored Aycenia’s hill, the crafty old goblin negotiated a mutual protection agreement with the dryad and her betrothed, the druid Kor’lec. Basako promised to encourage a shift in the tribe’s worship from their idealized version of Mechuiti to one more in line with the druidic faith — with Aycenia acting as sort of a religious figurehead. The dryad agreed, and also provided sanctuary to Likki’s family until such time as Nemanji II was of age to lead the tribe. 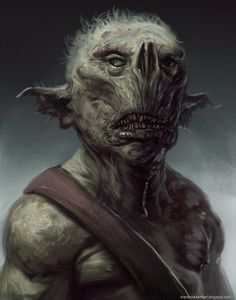