A 60-foot-tall baobab tree atop a lightly forested drumlin is the home of an exotic dryad named Aycenia. The Thrunefang cannibals avoid her hill, thinking Aycenia to be an evil spirit.

Aycenia does not recall how she came to be on the island of Smuggler’s Shiv, only that she has dwelt here for many ages. She remembers when the Thrune’s Fang castaways first came to the island, when the colonists before them began building the lighthouse, and even earlier times. Yet she also believes that she is a newcomer to Smuggler’s Shiv, for she can feel through her tree’s roots that even more ancient secrets and curses lie under the soil of the island.

Aycenia learned of the Castaways when the grig Pollock was reincarnated in her grove by the druid Kor’lec’s amulet, a relic of his tribe begifted him by his mother. The dryad sent Pollock to bring the party to her, unaware that the sinister fey had a vendetta against them and would try to take advantage of the situation for his own ends.

Having finally reached her grove, Aycenia appeared to the Shiv Castaways, cautiously but in a non-threatening manner. She tried to establish an accord with her visitors, offering healing and succor on her hill and more detailed intelligence on the threats they faced, in return for cleansing the alien fungus from the north islet they had dubbed the “Isle of Never Going There.”

Unfortunately, Aycenia was slighted by those in the party who chose to make jokes about a situation she considered quite grave. She was further aggravated by Nemanji’s incessant interrogations and his attempts to negotiate from her more power for himself. The tiefling's demonic nature and choice to keep a hand on his great axe in her sacred grove had already given the ancient dryad pause.

When the discourtesy reached its tipping point, Aycenia sullenly, silently drifted back inside her tree. Though Kor’lec tried to apologize for his teammates, the fey was gone.

After destroying the source of the islet’s blight, Aycenia was called on once again by the Castaways. She appeared as they were fighting off Pollock’s attempts to steal Kor’lec’s amulet for Ieana, who’d mentally dominated the grig. Impressed with their attempt to be merciful to her servant and thankful for the Castaways’ assistance, Aycenia offered her grove as a safe haven and place of healing. In addition, the dryad restored power to the reincarnation amulet, giving Kor’lec the capability to return the recently dead to life.

Aycenia formed a deep attachment to Kor’lek. After sleeping with him, she announced that she was pregnant with twins. The fey had decided to bear children not so much as to burden the druid, whom she knew was leaving the island, but out of a wish to alleviate loneliness and to experience humanoid motherhood. Kor’lec did not protest. After the Castaways removed Smuggler’s Shiv’s threats and broke the necromantic curse afflicting the isle, Aycenia suggested that Kor’lec should someday return and establish a druidic grove, as he’d already invested himself in the island’s healing and sanctity. Kor’lec, again, did not protest and vowed to do just that.

Aycenia was approached by the former Mongrukoo chief, the tiefling Basako, who proposed shifting his tribe’s worship of Mechuiti to one more in line with druidic ideals. Aycenia and Kor’lec agreed, seeing the goblins as potential stewards of the land who were bound to expand in the absence of the threats that had limited their territory prior to the Castaways’ many victories.

Part of their agreement was providing sanctuary in her grove to Likki’s son Nemanji II and wife Vershnat. Though Kishtari had intimidated Cenkil, the current chief, into recognizing the baby goblin’s chieftainship when he came of age, Basako wasn’t so sure his oldest son would keep his word. Aycenia willingly and enthusiastically took to the role, tickled by the opportunity to raise her own children with a goblinoid playmate. The dryad likewise became fast friends with Vershnat, and began teaching the goblin-wife druidic ways. When it came to helping raise Nemanji II, though, Aycenia’s dominant role as in her relationship with the child’s mom was completely reversed. Vershnat was in charge, and Aycenia was the flustered, though willing and able handmaid. 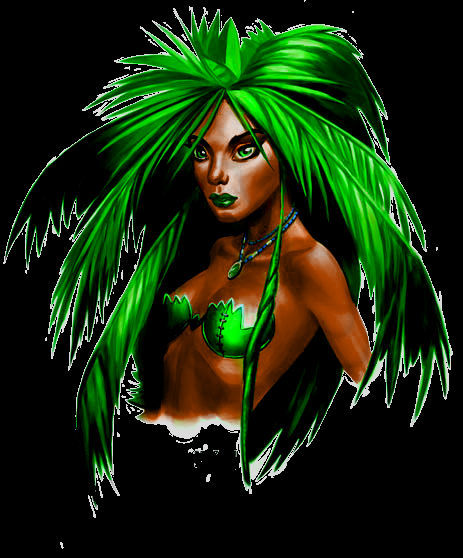