A trim, athletic woman with short dark hair, tanned skin, and fierce blue eyes. She dresses in tightly fitted leather armor and favors dark clothing and tricorn hats. Has “PERIL” and “LISS” [ sic ] tattooed on either of her calloused knuckles, and a number of other raw scratch tattoos visible across her body.

This severe half-elven woman boarded the Jenivere in Port Peril. With a statuesque elven beauty undercutting her ruggedness, Aerys was an object of interest for several, mostly male members of the vessel’s crew. These discovered that Aerys could spit, drink, and gamble with the best of them—which for many added to her allure—but that she was not at all interested in the attention. After crippling a man much bigger than herself in a bare-knuckles brawl, Aerys opted to spend most of her time in her bunk. There, she barely ate and simply drank herself to unconsciousness while breaking quill after quill on a growing stack of pages that comprised her poetic manuscript, the Abendego Cantos.

Among the surviving castaways of Smuggler’s Shiv, Aerys awoke sober enough to cynically warn against attempting to escape or navigate the Shiv’s coast by small craft, as the reef would smash anything smaller than a galleon to smithereens. The abrasive woman made no secret of her career as a buccaneer, but was fiercely loyal despite her transparent anxiety. Aerys was ready and willing to crack the skulls of anyone who would threaten the camp, or any member of the opposite sex who dared to flirt with her. Conversely, the half-elf was not much interested in making friends or exploring, and was deeply pained by alcohol withdrawal, and perhaps, a loss from which strong and constant drink was her only escape.

The nature of this loss was soon discovered in the pages of the Cantos, which the heroes recovered from the wreck of the Jenivere. Skimmed briefly by Kishtari, the poetic verses of epic seafaring adventure contained numerous references to the one thing that kept slipping away from the author, the love of a Sargavan riverboat captain—Kassata LeWynn.

After a few days having gone without the sauce, Aerys overindulged at the Mongrukoo feast, where the venomous goblin liquor left her laying largely lifeless. So vulnerable, the hard-bitten pirate proved easy prey for one of the Shiv’s subtlest pestilences— brainworms!

After being successfully diagnosed and cured of the parasites via magical potion, Aerys was rendered sober enough to recognize her own alcoholism. She implored Kishtari and Monica to help her beat the bottle forever, and gazed longingly at her perpetually unfinished manuscript as her own incentive. Aerys mentioned that the fruit of the viper nettle plant—a powerful narcotic used to ease delirium tremens, pain, and other symptoms of withdrawal—was known to grow on tropical islands like Smuggler’s Shiv. Though the plant itself is dangerous, the heroes readily agreed to gather its berries for the struggling half-elf.

Just days into sobriety on behalf of the away team’s efforts, Aerys shared the contents of the Cantos with Kishtari. Having grown close to the kalashtar, Aerys made a blunderous pass at her that both women chose to forgive and forget. Interestingly, Aerys’s likeness was discovered on a locket belonging to the Brine Demon’s years-dead captain Avret Kinkarian. Her resemblance to the woman actually depicted — “Aeshamara” — appeared to be a coincidence, but it did allow Aerys to briefly impersonate her when Kinkarian’s ghost showed up. Forcing kind words through gritted teeth, Aerys helped put to rest the spirit’s unquiet soul. Aerys insisted on a proper pirate’s funeral for the dead captain but gave Kishtari the locket.

Aerys initially opposed Sasha and Gelik’s idea to look for the Nightvoice, which the gnome sought for his own reasons. Her will still weakened from her battle with disease, Aerys was magically coerced by Gelik into going with the pair, abandoning Jask and the Brine Demon. An encounter with some ghouls in the jungle weakened them but the trio were completely unprepared for what awaited them at the Island of Never Going There.

Ambushed by the islet’s fungoid inhabitants, Aerys and Gelik were captured, and each had a foot hacked off to prevent them from running. Taken to the Nightvoice, the fungoids’ big leader force fed the pair toxic mold. Before she succumbed, Aerys and Gelik were rescued by the adventuring Castaways, who decided to go to the islet after all.

The Castaways were taken away from Smuggler’s Shiv by the Red Gull, a vessel that was deliberately intended to bring them to the Jenivere’s owner. Rather than submit to whatever Lord Maragorn had in store for them, the adventurers decided to hijack the ship. Aerys was initially opposed to this, her upset plain until Kishtari tried to psionically calm her. Though the enchantment failed, but the two women kissed anyway, passionately, as a battle raged around them.

After the ship was taken, Aerys was granted captaincy, and took the helm. She relished the role for the brief time it lasted. When the Gull made port in Suum’tero, Aerys let Kish know that she had strong feelings for her, but her true love was Kassata, and she needed to try to make amends with the riverboat captain. Aerys was on a ferry back to Eleder the next day. 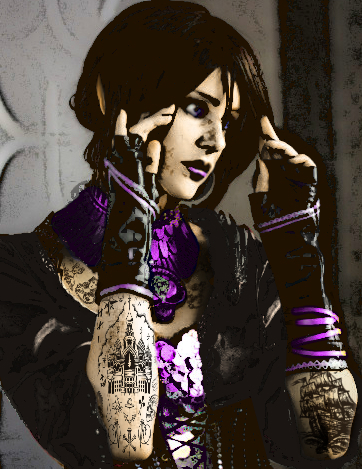