After living among such people I feel clouded and depressed; remember I have done nothing, and fear I may die unknown. I feel I am strange to all but the birds…

After a rough day for our intrepid castaways spent carting down the various valuables found in the Hive Queen’s lair from Black Widow Bluff, and studying the surviving carvings in that ancient serpentfolk sanctum, the night passed quietly. The following morning at base camp started out like all mornings; working out, maintaining weapons, and preparing spells through prayer or study. Then someone realized that Jask’s breakfasts consisted of nothing but tide pool sashimi. Jask pointed out those who wanted cooked food needed to give him something to cook with. Nemanji helpfully provided a flat stone and old copper helm for him to use as a pan and pot. “Thanks,” said the old cleric with a sigh.

Monica took note of the malaise and fear of the home team, and decided it was time to address it. She offered words of encouragement and praise to Aerys, Gelik, and Jask; “We’re all in this together, and we are all equally important.” The pep talk worked amazingly—the home team set about their chores with renewed fervor. Gelik entertained with some comedy from the top of a barrel to lift everyone’s spirits: “I used to have a fear of boats, but that ship has sailed!” Aerys cracked her tattooed knuckles with intense conviction. Jask, though, seemed to have something weighing on his conscience… 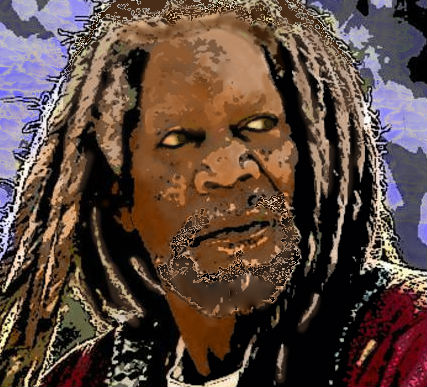 As they finished their sunrise repast, the away team discussed their plans for the day. First, Aerys seemed a little disoriented and clammy-skinned—a touch green as a matter-of-fact—but was otherwise functioning. Kor’lec‘s instincts were piqued and he felt strongly that something was wrong with his fellow half-elf; and that it related to Aery’s illness from the other night. Likki was no help diagnosing her, and Kor’lec was at a loss, especially since the surly brawler refused to consent to an examination (Nemanji’s boorishly suggestive comments didn’t help). Jask said that all-knowing Nethys could shed light on Aerys’ malady, and he would pray for divine inspiration the next sunrise.

With a lot of hesitation, Jask confessed that he had some favors to ask the adventurers in return. First, the old priest relayed that one of the men involved in his frame-up was a Shackles pirate named Avret Kinkarian who captained a ship called the Brine Demon. Jask felt strongly that the ship, reported lost after leaving Eleder a decade prior, had likely wrecked on the Shiv. “Maybe it has evidence of my innocence?” the former spy stammered. He knew it was a longshot, and that most of the away team demonstrated that they weren’t keen to deal with a similar pursuit posed by Gelik…

“We’ll do it,” Monica replied, without pause.

Second, " We need Sasha back," Jask argued. “If Aerys is sick, then that leaves just Gelik and I to defend the camp. I can set a snare, but can’t come close to Sasha’s ingenuity with traps. Also, she is a minor, and shouldn’t be alone out in the jungle.”

Though Nemanji wasn’t convinced (perhaps having felt a sting of betrayal from his young protégé), the others agreed (Kishtari with reservation) that they would set out after her. First, though, Gelik and Monica worked together, using charts recovered from the Jenivere, to calculate the likely wreck sites of the Nightvoice, the Pathfinder vessel Gelik wanted to find, and the Brine Demon for Jask. They concluded the Nightvoice likely would have wrecked somewhere on the northwest, near the ominous grey islet—"The Island of Never Going There." The Brine Demon, however, would have hit the eastern shore coming from Eleder, which was on their planned route of exploration anyway—after retrieving Sasha, wherever the troubled teen might have sulked off to. 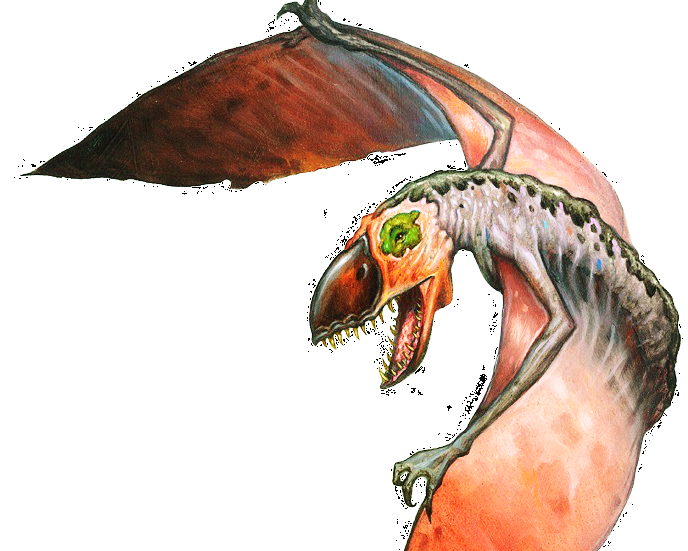 Just over a mile south of base camp, circumventing the highlands and cutting across Mongrukoo territory, the heroes located a recent campsite containing the covered remnants of a firepit and bones from a large rat. The trackers easily concluded that the camp was Sasha’s, who made a good attempt to hide her passing. But not good enough.

The trail continued westward before turning south. Nemanji climbed a large tree and saw that the lands to the south sloped downward toward the lagoon from the north cape that lent the Shiv its crescent shape. The trees gave way to scrub before a steep cliff ledge preceded the water. While arguing once more against pursuing the girl, even sullen Nemanji was moved to action when a girl’s screams stabbed through the clamor of the southward surf. Sasha was in trouble!

The titian-haired teen was at the shore, ankle deep in the swirling water, having slid down a steep but descendible slope from the cliff ledge to the rocky beach. There she was, bruised, blood-spattered, and battling for her fleeting life against a flight of feathered toucan-like reptiles— dimorphodons! The things were venomous, too. Sasha seemed doomed!

But just as one of the needle-toothed pterosaurs tore out a gore-sputtering piece of Sasha’s neck, two of the bird-like reptiles suddenly fell unconscious into the surf. The dying girl looked toward the slope, where Kishtari was standing, eyes aglow with psionic power, statuesquely pointing toward Sasha’s attackers like a vengeful goddess. The other heroes were deftly skating down the scree-covered incline, drawing weapons.

Monica pulled out a fucking gun, out of nowhere, and said “I think I finally got this thing working!” before pulling the trigger and blasting one of the creatures’ wing membranes right through! Gorilla-armed Nemanji took a careful step and hoisted one of the giant spears that Dornas fashioned for him, spun and launched it into a spray of feathers, gore, and meat that once was a dimorphodon. “We eat good tonight,” deadpanned the demon-spawn.

Sasha, swooning, her face a merry mask of crimson, shouted, “aren’t they just adorable!” without a trace of irony. Then she spun and planted her rapier and kukri into both the slumbering pterosaurs, twisting the paired blades with delight. Kor’lec and Kai charged and surrounded a dimorphodon; the fleet theropod leapt and raked a gash across the flying reptile just as the druid smashed it down with his ensorcelled staff. 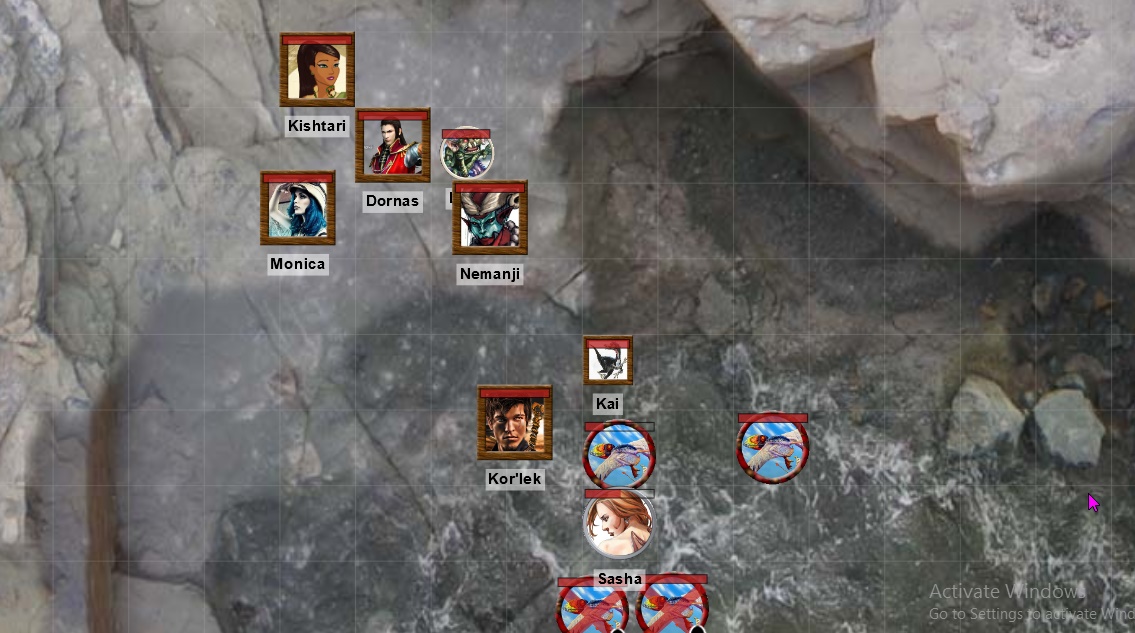 Nemanji jumped upon the back of a wounded dimorphodon as it was about to divebomb Sasha. With his enormous bare arms, the red-skinned tiefling tore the animal in twain by the wings, showering the smiling girl below with bloody offal.

The last of the shrieking reptiles caught an updraft the hell out of there, but not to find easier prey, as it turned out. Sasha, as her wounds were being cleaned, revealed that the beasts attacked her because she had climbed up to one of their cliffside nests to capture a hatchling or egg. The would-be ranger wanted one of the venomous pterosaurs for a pet! Despite it all, Monica was quick to let Sasha know with all the sensitivity she could muster that they needed Sasha, they were all a team, and everyone would take her seriously in the future. Sasha thanked them for saving her life.

Nemanji retrieved a few eggs for his human protégé from one of the recently orphaned nests. Sasha promised to take good care of the hatchling, and wondered what she should name it. But what if more than one of the eggs hatched? someone wondered aloud. “Chicken salad!” said Kor’lec. Kai barked. Everyone laughed.