We temporarily hearken back to the previous evening, to a slumbering Kor’lec, whose rest was disturbed by the sensation of something crawling upon his chest. The druid awakened and somehow managed to be less-than-alarmed by the presence of a kitten-sized, arachnid silhouette there. Even more impressively, he remained nonplussed after making out that his nocturnal intruder possessed the upper body of a blue-skinned fey, but from the waist down was a cave cricket. 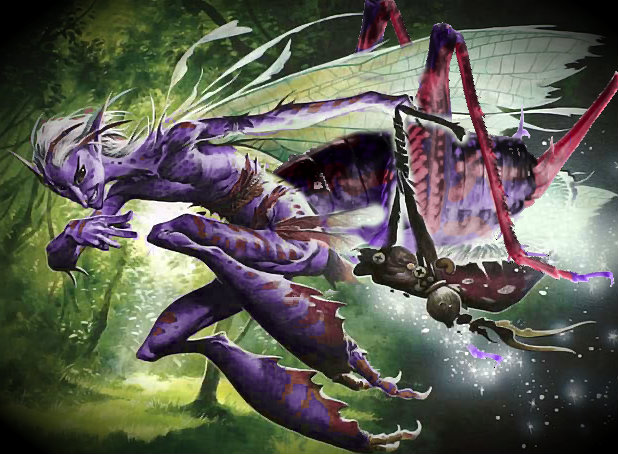 The tauric fairy probably thought his appearance would pack more dramatic wallop. The disappointment made the intruder impertinent, and he impatiently demanded food in the form of biscuits and honey before relating his story – though Kor’lec forced him to settle for some trail rations of nuts and dried prunes.

Pollock was the creature’s name, recently reincarnated into a grig – and he was not happy. He used to be a mite, the fairy mulishly explained, the last of the Klixarpillar, and had had his brains splattered to slop by Likki. “Remember me NOW?” challenged the fairy. “You. Were. Right. There.” Thanks to Kor’lec, though, or rather the druid’s long-thought-ornamental tribal amulet, Pollock was brought back to life in a new form. Turns out, the old trinket was fashioned to give new life to the dead and had a trace of juice left in it. Rather than be thankful, however, the rude little creature lambasted the half-elf and the Castaways for letting him die.

“What do you want?” asked Kor’lec. Though the druid felt some responsibility for helping the Mongrukoo goblins exterminate their traditional foes, his patience had thinned to a hair’s breadth.

“Two things. The vengeance I was raised for, first and foremost, for my adopted father and brothers. The Mongrukoo you travel with, my killer, must die. If I am satisfied, I am to lead you to the Spirit of the Island, who would like to speak with you.” The fairy revealed that the Spirit, whoever she was, suffered under the curse afflicting the island and sensed in Kor’lec someone who could avail her. After relating his terms, the grig fluttered upward and vanished. “I’ll be watching,” he warned.

Kor’lec brooded, and later, his friends would fail to snap him out of his contemplation. But the druid’s feet were as one with the brush that blanketed the isle, and would not be far behind.

Later, Kor’lec and his faithful dinosaur friend Kai soon located the other Castaways just in time, as they were being engulfed by vines and roots at the side of a massive copse of viper nettles. Over their heads a wicker basket, precariously balanced in the branches of the canopy, was being shaken loose by all the whipping and writhing on the ground. Only the druid perceived the trap and the imminent danger to his companions. Lurking in the maze of brambles, camouflaged by its own thorny body, a wyrm-like beast lurked, only barely glimpsed moments before by Dornas. After animating the thickets, the creature withdrew from sight, in all likelihood relying on its defenses to weaken the trespassers. Kor’lec shouted a warning to his friends and emphasized his entrance by launching a spear at the basket. Alas, he missed.

The twig-woven bin tumbled free from the treetop and seemed to fall in slow motion as the heroes raised their heads. Nemanji made a mighty leap to catch it but was a split second too late. Kishtari attempted to psionically snatch or snap it away but in vain – it was too heavy. Dornas retreated from the lashing vines and the pending impact of the ominous falling object by floating up toward the canopy. The container finally landed on the soft earth with a thud and the lid popped off…

Meanwhile, Kor’lec focused his keen elf eyes into the copse and spied the sinister bramblewyrm! Wasting no time, the druid sniped the creature with a spell that outlined it with magical light. Brighter now than a torch in the gloom, the plant monster had no place to hide. 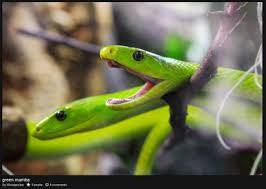 Kish bent to peer into the darkness of the opened basket, but Nemanji sensed what was coming in enough time to wedge himself between the threat and his friend. Two deadly green mambas, anxious and starved, streamed hissing from the opening like rivulets of acid.

Nemanji was primed with his razor-honed greataxe – but a sharper glint in his eye. One of the serpents sprung at him, its venomous fangs bared wide, but the enraged tiefling sidestepped and rived the reptile from the hinge of its jaws to the tip of its tail. The demon-blooded barbarian turned to face its mate…

And that’s when Kishtari did the unthinkable. 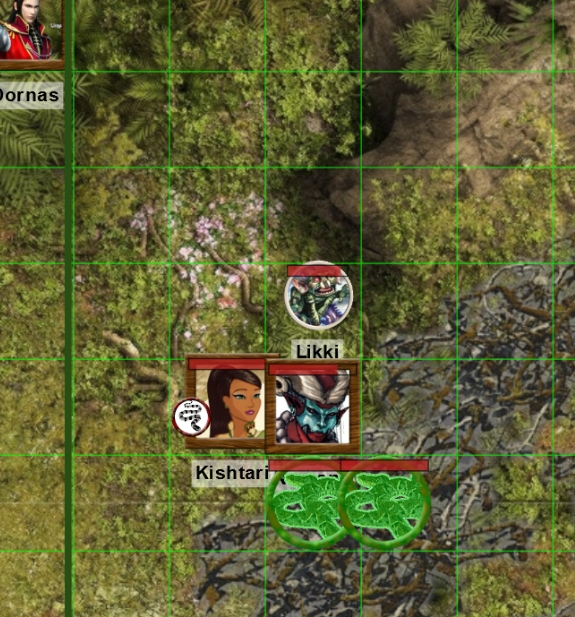 Horrified to see the animals she considered most sacred to her slain, the kalashtar enveloped the remaining viper – and Nemanji – in a shroud of psionic slumber. Though her alleged intention might have been to tranquilize both combatants, only the tiefling collapsed on his cloven feet.

While Dornas alone had a clear view of Kish’s misconduct, the whole of Golarion seemed to hold its breath as the very-much-not-sleeping-serpent closed its jaws on the barbarian’s jugular.

Kick Against the Pricks

Little Kai cornered the very confused, glowing plant-creature in the berry-laden center of the nettle patch. As the natural briars parted to make way for his passage, Kor’lec was quick on his companion’s clawed heels, while Monica deftly maneuvered through the maze of thorns to come within close range of her two-barreled gun. The bramblewyrm desperately tore into the velociraptor with its barbed talons and horns, but claw for claw, it was no match for its animal counterpart. Kai unraveled the vegetal dragon like a cat assailing a skein of yarn. An ear-shattering report signaled the explosion of hot lead from Monica’s pistol, and the near-end of the bramblewym, as the bullet blew it to barest twigs.

Kor’lec had had enough of this latest example of the Shiv’s perversions of nature. The druid placed his clenched hand in the midst of the bramblewyrm’s battered frame and let drop a fistful of seeds; these suddenly sprouted into a blooming cluster of parasitic greenery that completely assimilated their ambulatory host – to the very last sprig, nutrient, and droplet of moisture… 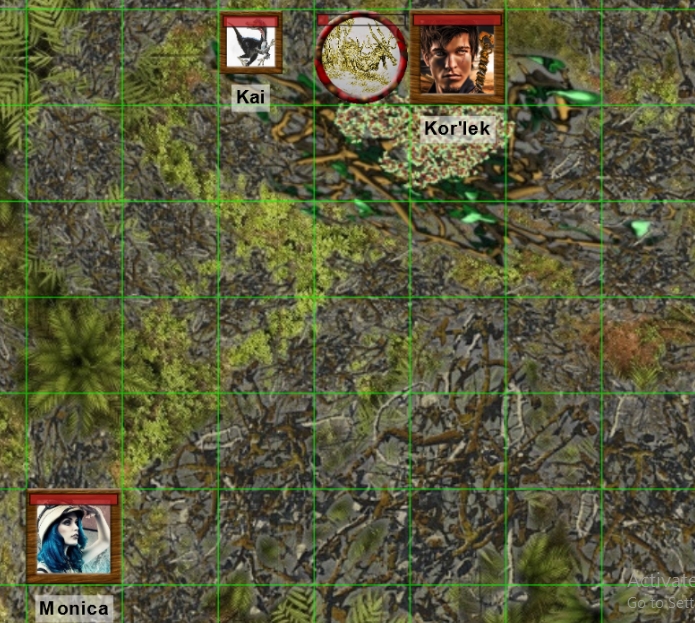 No Antidote for Doubt

The serpent had only just missed the vital vein on the tiefling’s neck. Nemanji was jarred awake by the pain, sprang to his feet and stared daggers… nay, Nemanji stared vorpal broadswords at Kishtari. He didn’t take those intense hunter’s eyes off of her as he dropped his axe’s head on the mamba like a Galtan guillotine. With the blade, the pissed-off barbarian scooped up the still squirming, blood-spouting halves of snake and flicked them off toward his old friend. Kish just stood there mortified. Then Nemanji realized that the deadly poison was already starting to shut down his musculature while the area around and inside his hideous neck wound was swelling like a balloon.

But Kor’lec was there once again to save the world, at least, the world as it pertained to the Angazhani savage. Opening his medical bag to an assortment of salves, siphons, and leaches; the druid expertly extracted most of the venom with a combination of tribal witch-doctoring, chirurgery, and old-fashioned intuition. Nemanji expelled the rest from his sweat glands through sheer macho determination. It was the first time anyone had seen the tiefling sweat.

After the dust had settled, Nemanji ascended to the trees alone, looking for more snakes to kill. Monica bagged the mambas’ remains to weaponize their venom, and extracted one of the bramblewyrm’s natural armaments: a thorny whip she knew she could preserve with her alchemical expertise. Kor’lec gathered the viper nettle berries for Aerys, then a glint from another section of the patch caught his eye – the draconic plant-creature had collected a modest treasure horde.

Kishtari tried to bluff, then excuse, and finally admit her deed – that being, deliberately sedating Nemanji – when Dornas, expert on the workings of spell- and psi-craft alike, put the screws to her. The magus reminded her that they were in pursuit of a murderous snake cultist. They would almost certainly be facing the dangerous reptiles again. Would Kishtari be a liability? The psion couldn’t give a concrete answer, and the troubling uncertainty of her loyalties persisted.

While returning to the Brine Demon, Kor’lec pulled Dornas aside to talk about the previous night’s visitor. But as is often the case, the conversation did not remain private for long. Likki had already been dispatched back to Mongrukoo territory with some of the tribal trinkets and treasure in the hopes of procuring more disease-preventative ointments from his people — though he might have been touched to know how the conversation played out. Dornas was sure the grig was hiding something or overstepping his role as middleman between this “Spirit of the Land” and the druid. Everyone else agreed that while the Spirit could prove to be a valuable ally, nobody wanted to see anything bad happen to Likki.

Later that evening, Kor’lec, Kai, Nemanji, and Dornas decided to go hunting for some meat that wasn’t scraped out of a tidepool. Jask appreciated the night off. Monica worked on alchemy stuff.

Kishtari found a quiet place on the ship and pondered current events with her psicrystal and an old bottle of plum wine she’d picked from the wyrm’s horde as company. Aerys eventually joined her, but the recovering alcoholic passed on a swig from the bottle. The nettle fruits were doing their job, it seemed. Aerys thanked the woman who was becoming her friend for putting her life on the line just to help cure a surly sot like herself.

“You say it was nothing, but it means everything,” said the pirate. Aerys put her manuscript, the Abendego Cantos, in Kishtari’s hands and invited her to look the draft over. "It’s life at sea, pirate adventures… but it’s also about my love for a Sargavan barge captain that I met in Port Peril." Aerys explained that Kassata LeWynn and she were partners-in-love and partners-in-crime (literally) before Aerys’s excessive drinking drove the Riverman back to Sargava. Aerys still pined and hoped the Cantos, dedicated to her lost lover, would win her another chance. But she also knew that the poems were nothing next to sobriety, and that she had Kish and her friends to thank for it.

Kish was moved. Aerys left her with the manuscript, and the kalashtar soon found herself captivated by the inspiring verses of danger, triumph, will, adventure, and love on the high seas.

Meanwhile, Dornas, Nemanji, and Kor’lec had been tracking a small herd of goats through the jungle. They came upon their quarry too late, a pair of big monitor lizards beat them to it. The reptiles were too engrossed in their meal, but the hunters sensed a bigger threat immediately.

A bull dimetrodon, about 15 feet long from snout to the base of its tail, charged from the brush and snapped up the first lizard in its jaws, killing it instantly. The second monitor turned to make a break for it, but it too was chomped on and slain. Dornas vanished, and Nemanji took cover in the canopy, leaving Kor’lec and the great sailback eye to eye. 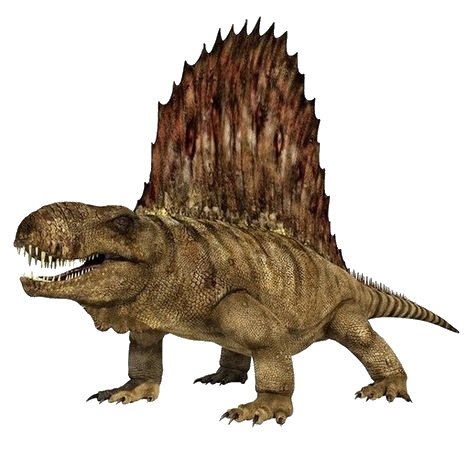