The breakers were right beneath her bows,
She drifted a dreary wreck,
And a whooping billow swept the crew
Like icicles from her deck. 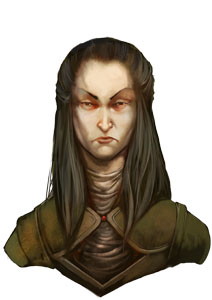 In his delirium, Kor’lec remembers and dreams…

He recalls a moment during the voyage of the Jenivere, when he temporarily lost control of his velociraptor companion Kai. Kai leapt up into the arms of the normally unapproachable Varisian scholar Ieana. Ieana seemed uncharacteristically nonplussed and friendly with the animal, talking to the dinosaur as if she were a person. Kai seemed friendly with Ieana, too. Ieana asked what her name was, and Kor’lec said “its Kai,” but Ieana reproached him and said she was talking to the animal. After Kai made some chirping sounds, Ieana said the raptor’s name was really Rain of Talons—Whose Feathers Will be Bright. She then ordered the small theropod back to Kor’lec, sardonically ordering her “back to your master.”

Then, Kor’lec had a feeling he was in Kai’s head, seeing through her eyes, looking up and searching desperately for her druid friend as the ship was being tossed on a storm. She ran into Ieana again. “Little Rain, you are seeking your master. I am sorry. (She turned a moment toward a shadow) Lower your sword my love, the beastie and I have an understanding. Little Rain, you would be safest below. Yes, I know you hate the cages. But they will protect you. Go there, and rest—and if anyone should disturb you… (she whispered into her ear).”

Kor’lec awoke with a start, declaring that they had to return to the ship and rescue Kai! He was only slightly shocked by the fact that he was on a beach now instead of the ship where he was before going cataleptic—perhaps subconsciously absorbing his predicament through the debate his fellow castaways were having nearby about their next move.

Which was, in fact, to return to the ship. Mostly for their weapons and gear, but also for some salvageable supplies. And answers—Monica continued to conjecture that they were brought ashore by whoever caused the wreck, probably to serve as some sort of sacrifice. Most of the party agreed that that kind of made sense. Dornas, Kishtari, Monica, and Kor’lec set out for the shipwreck.

Nemanji refused to go, declaring that his first time on a boat demonstrated that “boats,” clearly, were “no good.” He would explore inland instead. Gelik, Aerys, Sasha, and Jask were still suffering from shock to various degrees but wished the others luck. Nemanji reiterated again his convictions that a) “ship no good” and b) “you all die” before the demonic savage vanished into the bush.

Though they set out in the early morning, a few hours were spent navigating the treacherous rocky surf that replaced the beach along the edge of the bay to the wreck. By the time the tide was starting to swell, the four reached the general area of the Jenivere, which was gored by rocks though her lower decks like the horns of an angry bull, and listing precariously against a tall cliff face. Taking a beating from the waves, it was clear that they didn’t have much time before the sea would claim her.

But hold steady she did, and fortunately so, for it took several hours for the quartet to figure out a way inside the Jenivere without being swept up in the violent whorls and rushes that swaddled her on all sides. Several attempts to telekinetically pull loose rigging lines to their position failed, as did any attempt to cross the ferocious surf. Finally, after some brainstorming, the team worked out a last ditch gambit that was so crazy it had to work. Calling upon Dornas’s extensive creativity regarding the applications of magic, Kor’lec summoned to the surface a mass of seaweed and kelp to provide a sort of carpet to walk on, while Kishtari identified the safest way to cross over to the ship. Monica was prepared to unlock a hatch they could access once there, but the heroes instead found a breach big enough to walk through.

And so they did, as darkness descended on the rocking and groaning Jenivere, Monica created a magical light to guide the party through the gloomy lower deck. Carefully following the gutsy archeologist across the treacherous warped, tilted, and sea-sprayed deck, the heroes peaked in the crew quarters and then the main storage deck where several horses were secured—and all killed in the collision. Finally turning toward the area where the Jenivere kept cages for captive animals (which also served as a makeshift brig for poor old Jask), Kor’lec found his little dinosaur buddy. But the reunion between man and pet wasn’t the poignant moment everyone envisioned, for the beast acted scared and aggressive. Kishtari recognized the telltale signs of mind control, which had severe implications beyond Kai’s immediate hostility. Kor’lek was struck hard in the heart by the violation of his natural bond with Kai, and vowed to make the person responsible pay. With the druid’s permission, Kish gently put Kai to sleep so he could swaddle the animal in some canvas and netting found in the storeroom they came in.

The quintet were then forced to make their way across a floor strewn with horse carcasses to reach the stairwell to the upper deck. However, one of the rotting equines was clearly ambulatory, and rose to face the source of the light. The beast’s back legs were broken, and it pathetically dragged itself toward the heroes by its forelegs, its horsey lips curling to reveal chomping teeth desperate to satiate a hunger it couldn’t comprehend. Though Monica pointed out it could easily be evaded, Kor’lec refused to allow the animal to suffer the agony of undeath. The druid, with a sleeping Kai strapped to his back, charged the zombie with a shovel he had grabbed in the storeroom and brought it down on the reanimated equine with an angry thwack. Monica likewise sprang across the rubble- and carrion-strewn deck and blasted the zombie’s face with healing magic—antithetical to undead. The horse somehow choked out a haunting neigh and lashed at the bardic academic with its front hooves and head, but Monica deftly weaved and parried.

Kishtari drilled the horse through its eye socket with a crystal dart. The fragile psion then bravely moved into striking distance of the risen animal to distract the creature. This allowed Kor’lec to sever it’s back with the business end of his shovel to a torrent of putrid cerebrospinal fluid. Dornas hopped over and shattered the dead beast’s face bones with his banyan tree branch, but was smashed in return by a mighty butt of the horse’s head. If the fight wasn’t soon finished, Dornas was done for…

Then something miraculous happened: Kishtari, demonstrating the frightening psionic potential of one descended from the terrifying spirits of Dal Quor, began to glow as an otherworldly light shone in her eyes. The rotting horse arose from the deadly ground and flew apart like tender roast meat shaken off the bones.

The victorious zombie horse-killing champions swaggered on up the stairs to the upper deck, though Dornas’s strut was mitigated somewhat by his shattered ribs, and Monica was a little shell-shocked by her first encounter with the undead. The party’s first stop was to recover their equipment from their bunk room, and as heroes should, they grabbed their fellow castaways’ gear too. Greed nearly got the best of Kishtari when she saw how much money the others had stashed, but Kor’lec reminded the former thief that she was no longer a criminal. However, curiosity succeeded where avarice failed, and the explorers wound up paging through Sasha, Aerys, and Gelik’s writings.

Gelik’s journal, read by Dornas, contained clearly embellished tales of his adventures as a member of the Pathfinder Society with more recent entries describing his trip aboard the Jenivere, complete with exaggerated descriptions of its crew, passengers, and his interactions with them.

Aerys’s papers, read by Kishtari, contained a draft of a poem, touchingly composed and luridly depicting a Sargavan riverboat captain named Kassata LeWynn. The essence of the work was the captain’s tumultuous, difficult courtship with an unnamed Shackles pirate that appeared to be an obvious stand-in for Aerys.

Sasha had an undelivered letter intended for Captain Kovack complaining about the presence of a green-cloaked halfling that no one aboard the ship would admit to seeing. The letter demanded the halfling be hunted, exposed, and removed at all costs, and suggested he was an agent of her mother’s that secretly boarded with her at Mediogalti Island. Kor’lec believed his superior elvish senses would have noticed a halfling skulking around the ship but suddenly recalled a few sailors joking about one of the passengers (Sasha) complaining she was being stalked by one.

Captain Kovack’s room was chock-full of treasure and information. A desk contained money and potions. An intact chest held Jasks’ gear, whose holy symbol to Nethys and spell component pouch exposed the old convict as a cleric to the god of magic. Dornas took one of the healing potions. On a hook hung the keys to Jask’s manacles. Finally, the captain’s log revealed a man slowly growing unhinged—he became obsessed with Ieana, paranoid that his First Mate Alton Devers and other members of the crew were eying her, and the final entry revealed his insane plan to change course to Smuggler’s Shiv so he and the Varisian could start a new life there together.

Though Ieana’s room was difficult to move through on account of the fallen beams, the investigators were determined to be thorough especially where she was concerned. They found the remnants of a small personal altar with a fang-shaped dagger and broken bronze unholy symbol that Monica identified as representing Ydersius the snake god. She pointed out this god was beheaded by an Azlanti hero ten thousand years ago.

Additionally, the heroes uncovered a book with a well-paged chapter on Smuggler’s Shiv: 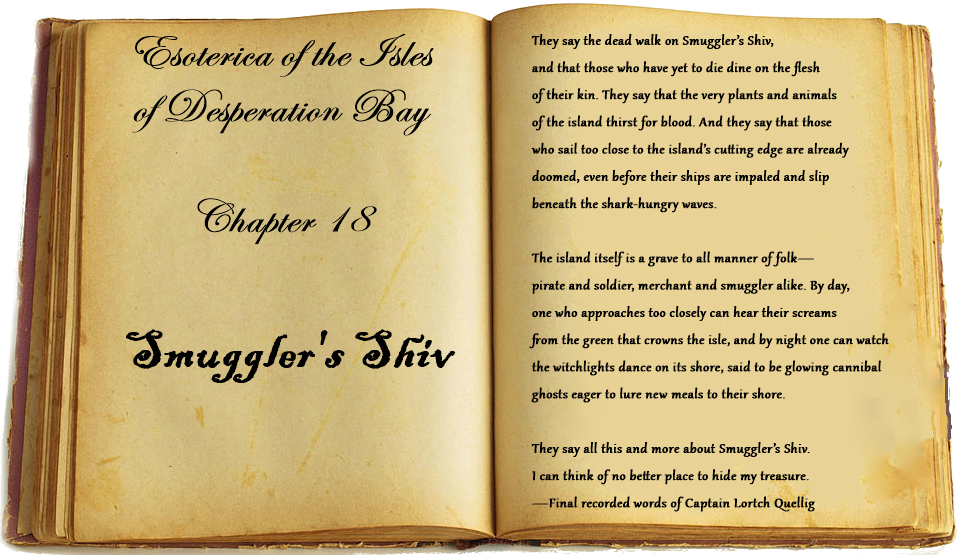 And containing these margin notes, translated by Kor’lec and Dornas from the black tongue of Aklo 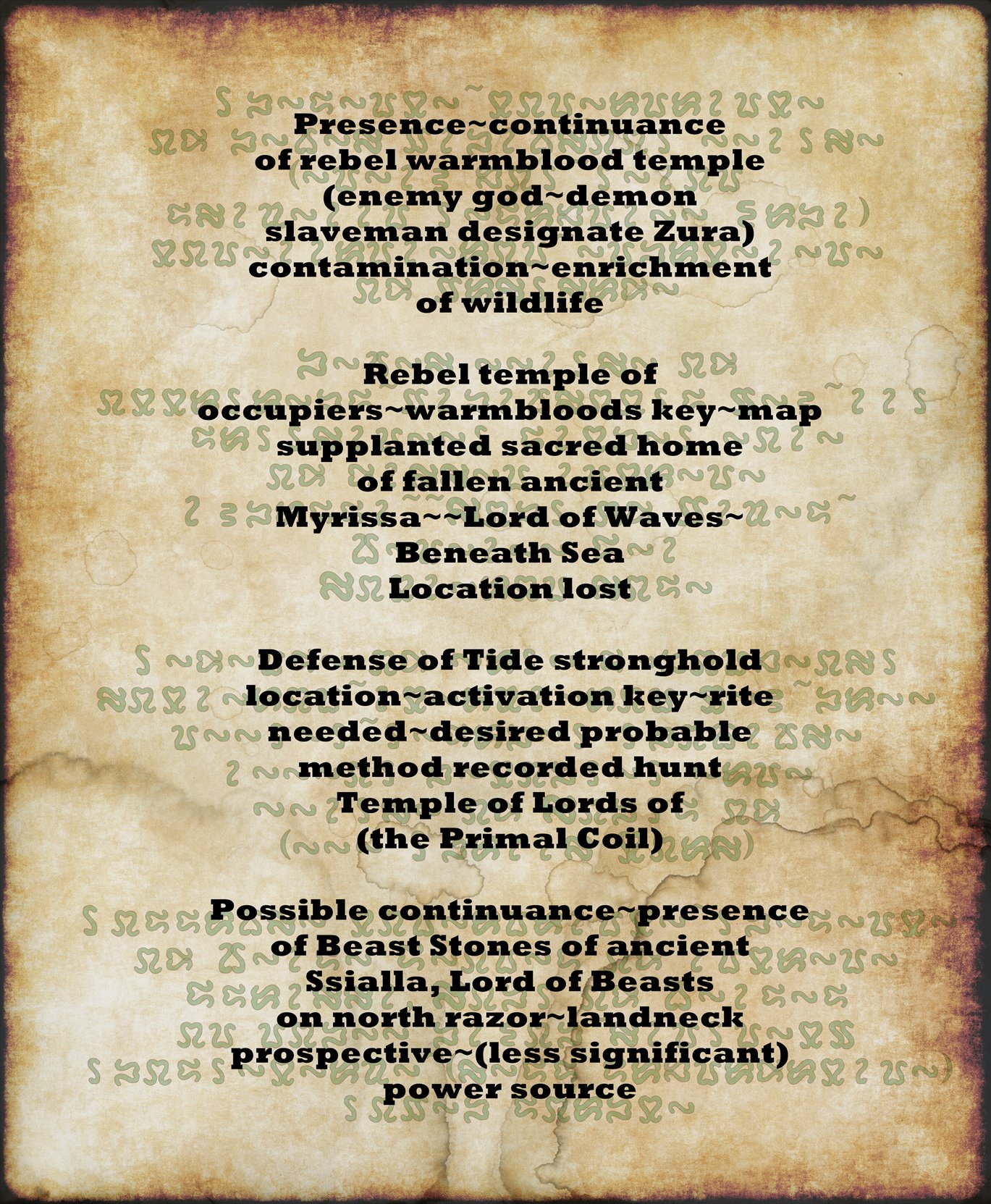 The discussion among the heroes turned grave as they realized that the introverted “Varisian scholar” Ieana might not be human at all!

Deciding to see if any clues about the previous night’s poisoning could be found in the kitchen, the heroes opened the door to find the corpulent cadaver of the cook Rambar, who arose with a meat cleaver in his clenched hand and murder in his eyes. 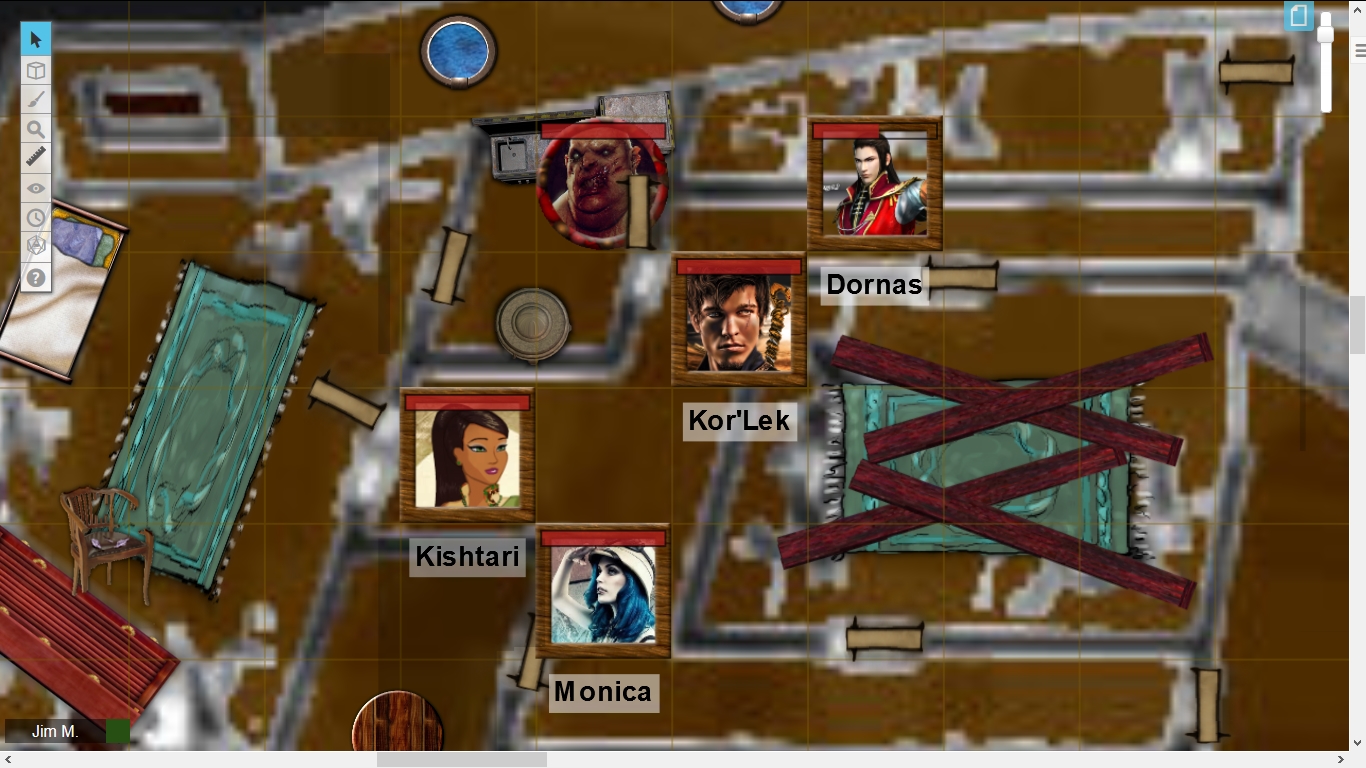 Hey thanks a lot! I love writing the logs.

Honestly, I wanted a Google font for the main text that reminded one of old adventure novels, I have a very old paperback edition of King Solomon’s Mines so I wanted to invoke that. Not sure I’ve found what I’m looking for so I I’m open to suggestions. I am happy with TradeWinds for the headers because it invokes treasure maps and 80’s tv shows like Tales of the Gold Monkey and Bring ’em Back Alive.