One of the advantages of being disorganized is that one is always having surprising discoveries.

On the return to base camp, Sasha proved disarmingly cooperative, considering the trouble she had caused. Hanging back with Nemanji, the teen ranger agreed to teach him some of the best tricks to take humans unawares. Sasha admitted that she was able to learn a few good ambush tactics from the Red Mantis before the cult deemed her temperament too wild to tame. The tiefling enjoyed the thought of killing better and faster, and announced he would remain at camp the following day to train.

Jask was gladdened to see the adventurers return with the young girl, especially as Aerys’s condition appeared to be worsening. The old priest reported that while the half-elf was functional, she was stricken by regular bouts of disorientation. At times, Jask explained, Aerys would simply stare at something vacantly for minutes at a time, and in fact the returning party caught her doing just that—drooling and gawping in their direction like a suffocating fish. When an attempt to discern any supernatural ailments proved fruitless, Jask reminded the group that his god Nethys might reveal any natural affliction the woman could be suffering from—though he needed to include the request in his prayers the next morning.

Gelik was giddy to lay eyes on Monica Montana, the girl of his dreams, once again. Hat in hand, he half-feigned regret and pointed out that the wind seemed to have irreparably damaged to his lean-to. The gnome knavishly asked his fellow Pathfinder aspirant if he could bed down with her that night. Monica tenderly took his tiny hands into hers and pulled Gelik into her tent.

Ghosts of the Coast 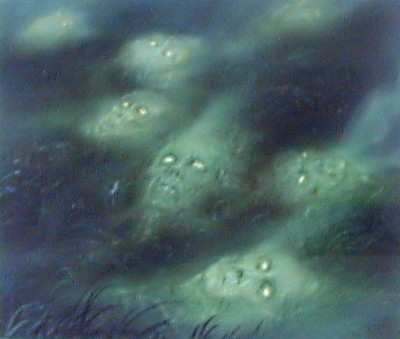 Taking first watch, Kor’lec noticed something disturbing in the surf. Though the occasional midnight glow of the churning water had been previously ascribed to natural, if eerie, bioluminescent algae, this time the half-elf saw shapes—vaguely humanoid phantoms that formed and vanished with the whorls and heaves of the waves. One in particular seemed to be beckoning him to join her out in the deadly breakwaters. When he pointed out the phenomenon to Dornas, the magus confirmed that there was a trace of necromantic energy present.

Meanwhile, Monica was dealing with ghosts of her own. As her partner snoozed contentedly beside her, the archeologist dreamt she was in a storm-wracked rowboat sculled by Alton, the missing first mate of the Jenivere. Clearly, he was dead, his bloodless body carved by cutlass and perforated by fangs. When asked, Alton said he was bringing Monica to the beach with the other survivors. The spirit groaned incomprehensibly, and barely managed to inquire after his missing son, Brynan, last seen in Bloodcove before the Jenivere was forced to depart without him.

Monica awoke with a start, and Gelik was roused too. The two discussed her dream as the gnome massaged her trembling shoulders with surprisingly powerful hands, explaining “I need them both to wield a pen with competence. Why, if you can’t write long hours with either hand, publishers can’t trust you with deadlines, and they’d be right not to!” Monica appreciated her lover’s funny little idiosyncrasy, then vowed with all seriousness to find Brynan. Gelik said Bloodcove wasn’t particularly friendly to Pathfinders, but he would put his deep pool of contacts in the Society at Monica’s disposal. 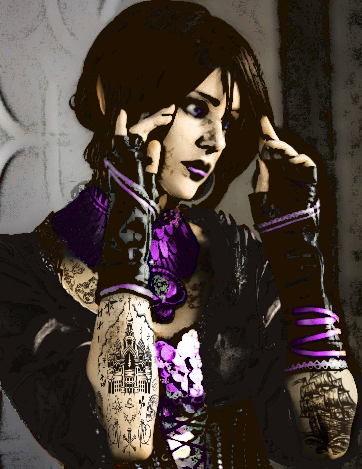 The next morning, after a breakfast of hearty dimorphodon stew, Jask didn’t long beat around the bush. “Nethys has spoken. Aerys has the brainworms ”. The castaways (after fighting every urge to puke up their stew) decided the safest course was to give the pirate their only disease-curing potion. Wisely, Kishtari and Monica went alone to awaken the sick half-elf and got her to drink the magic elixir using the old “hair of the dog” trick. After expunging the parasites, a temporary side effect of the curative created a sober clarity in the oft-drunken sailor. Aerys took the opportunity to make amends for her loutish behavior but Kish graciously insisted it never bothered her in the slightest. Aerys heard tell that a powerful antiemetic was made from viper nettle fruit, known to grow in wet, hot environs like on the Shiv. The berries were used throughout Garund to treat pain and delirium tremens from alcohol withdrawal. Monica pointed out that they could find the berries and ease the symptoms, but Aerys needed to want to stop drinking. Soulfully gazing at her perpetually unfinished manuscript, The Abendego Cantos the pirate-poet assured, “the bottle has robbed me of all that is truly important.”

When the rest were informed of Kish and Monica’s pledge to help Aerys beat her addiction, only Kor’lec sourly expressed doubts. He knew the viper nettle well from childhood dares. “Not saying it’s a plant monster…” the druid clarified before explaining, “the plant whips its branches in defense—which, by the way, have six-inch thorns that are mildly poisonous.” “That makes you the perfect person to gather its berries!” Kish reasoned, “isn’t that kind of your thing?”

Striking southeastward along the cliff tops between the beach and the forested interior, Dornas, Monica, and Kishtari followed Kor’lec’s footsteps. The trailblazing druid was as one with the environment, and the castaways made splendid progress in his wake. Among the things they noticed were a number of decrepit old vessels rotting out in the surf, victims of the coral reef that surrounds Smuggler’s Shiv. Monica’s treasure sense tingled and was keen to delve into these barnacle-encrusted carcasses, certain that they still hid supplies and secrets. The others weren’t so eager, the wrecks being so far out. The group moved on, collectively keeping an eye out for possible hideaways to relocate their base camp.

After avoiding the hunting grounds of another dimorphodon flock, the adventurers discovered the recent remains of a campsite on a sandy stretch of beach. Evidence mounted that this was where Ieana made landfall. Just about as old as their own time on Smuggler’s Shiv, the encampment contained a few old scarves the investigators recalled as being preferred by Ieana aboard the Jenivere. Further, Kor’lec pulled Captain Kovack ‘s battered tricorn hat from the sand, and decided to wear it. Though the moldy accessory afforded no insight into the villainous pair’s current whereabouts, it looked good on him and anyway their trail into the jungle was patently obvious even if he wasn’t a druid. Even after so many days, gratuitous cutlass marks on the foliage would make tracking their enemies child’s play. The group decided to put a pin in that quest until at least Nemanji caught up with them, and began to wonder whether or not Kovack was being influenced by Ieana, which would mean he was more or less innocent.

As it was getting warmer under the noon sun, the castaways decided to wait out the intense heat of the next few hours beneath the remains of Ieana’s lean-to. 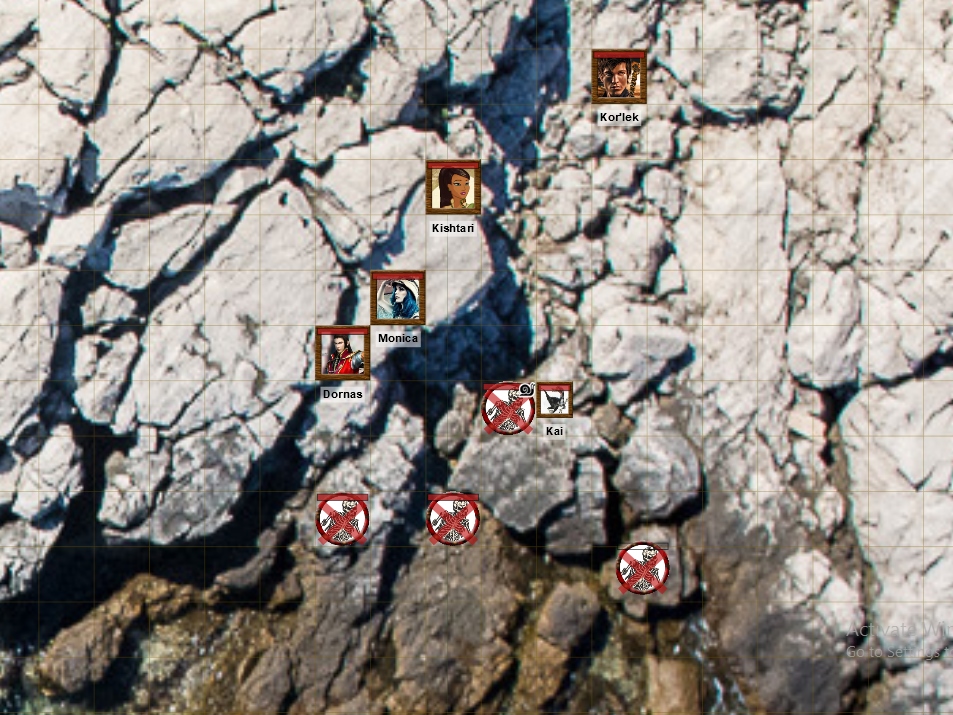 Despite their agreement to wait for Nemanji, a view of the strand further southward revealed the wreck Jask was hoping they’d find. The Brine Demon, her leering tentacle-bearded figurehead and sun-bleached standards were visible even from a great distance. By the time the explorers reached the cliff edge overlooking the scuttled vessel, the remains of the Brine Demon’s crew were evident upon her decks—mostly because they were still walking around as skeletons. The undead were armed with rapiers or scimitars, and wore the tattered remnants of their piratey garb over corroded mail shirts. The heroes skillfully descended the rocky slopes leading to shore, where four of the skeletons aimlessly patrolled.

The undead did not notice the heroes creeping up on them until it was too late.

Dornas vaporized one with a beam of positrons, a simple cantrip the magus mustered and aimed flawlessly. A split-second after, Monica announced her presence with a pistol shot that smashed some walking bones to splinters. Kish manifested a crystal bullet that decapitated another, who crumbled to a heap as it tried to retrieve its missing head. As the remains of the again-dead rolled into the surf, Kai leapt on the last skeleton, who was struggling to regain its footing after being tripped by Monica’s bullwhip. The dinosaur’s jaws crunched down on its chattering skull, and the gray lights in its eye sockets winked out for the last time.

The heroes were victorious again! or was the real challenge awaiting them aboard the hulk of the Demon? 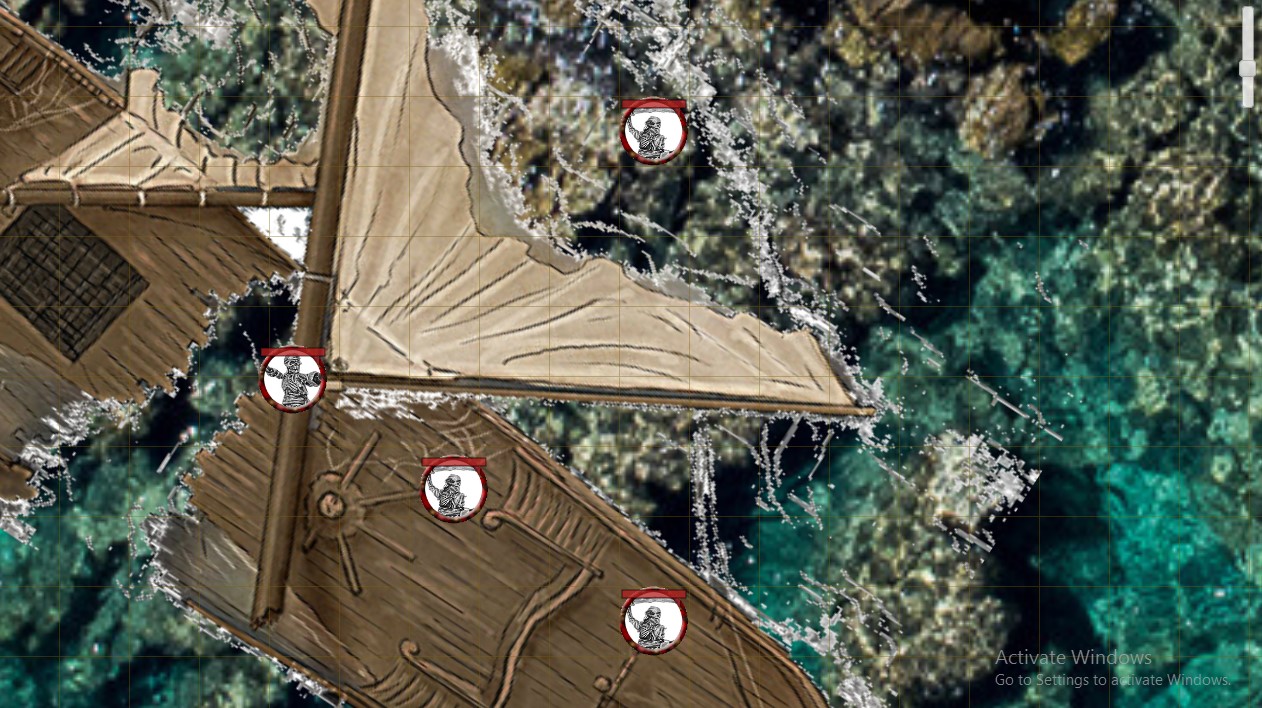