Now goblins are cruel, wicked, and bad-hearted. They make no beautiful things, but they make many clever ones.

Breakfast was eaten, spells were prepared, wounds were healed, and the castaways discussed their agenda for the day. Monica, ever inquisitive, suggested it was time to explore inland. Dornas agreed that they had a lot of ground to cover if they hoped to find Ieana, and sharply deduced that the mesmeress must have made landfall elsewhere on the coast. It was put forth by Kor’lec that they should seek higher ground in order to get a better lay of the (is)land. Nemanji and Kishtari were likewise keen to venture into the jungle.

Meanwhile, the others were given tasks to maintain the campsite. Gelik offered to keep spirits up with stories and yarns. Aerys agreed to take her anger out on any threats. Sasha whined about scavenging for food because the camp was so far from the forest, so Jask agreed to fish so she could set traps instead.

So as to quickly ascend the cliffs to the mainland from their seaside base, the party came up with an ingenious system. Needing two knotted ropes expertly tied together, all turned to Aerys—who bestowed her usual piratey guff after being asked to help. “Just tie the fucking ropes,” Kish countered, tired already of that aspect of the sailor’s character.

Nemanji donned a gorilla-faced tribal death mask that allowed him to climb like an ape—an item he must have had on his person the whole time but no one noticed until now. It finally donned on Kor’lec that the demon-spawn was clearly involved somehow with the Angazhani, ancient enemies to his own tribe, the Kallijae elves. Heedless of the half-elf’s scrutiny, the tiefling scaled the 70 foot cliff and dropped a knotted rope for the others to ascend, or in Kish’s case, be pulled up.

The party struck west, along the apex of the cliffs overlooking the sea, toward immense forested hills. The going was slow, the topography was pocked and rutted and there were no trails through the enormous trees when the heroes were forced further inland—or rather, no trails on the ground. 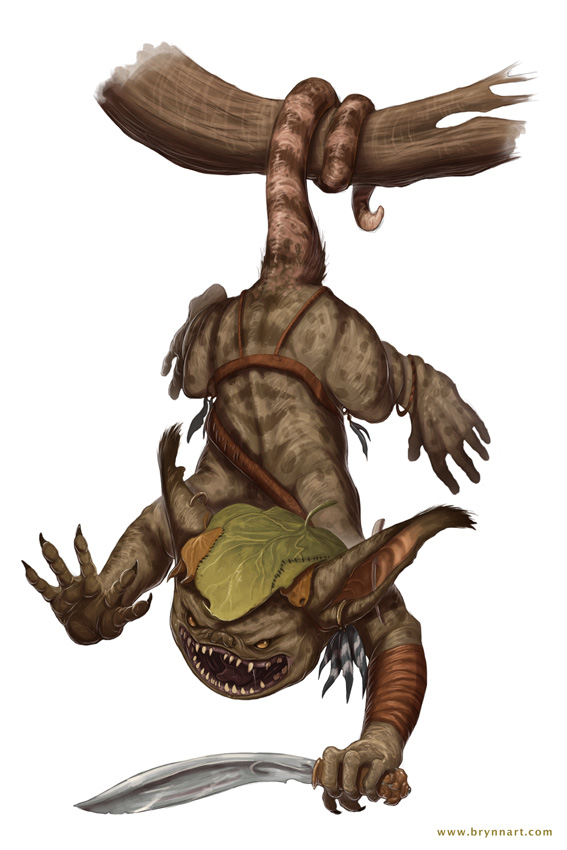 Kor’lec was the first to see it, then Dornas—but it was too late. The coconut had whirled out of the trees from the goblin’s hand like it was shot from a cannon. It cracked against Kishtari’s skull with a clang. The kalashtar’s head rang like a gong, but that ringing would waken a sleeping giant of psionic force.

There were three of them—monkey goblins—two youthful braves and an elder veteran by the look of the latter’s hairy, grizzled countenance. The coconuts flew fast and furious. Kai raced toward their raised position along a series of fallen trees, and her master followed close behind. Dornus was hit hard by one of the flung fruits, and began firing his light crossbow into the trees, wounding one of the aggressors. Monica and Nemanji drew their bows and returned fire—Nemanji summoned his demonic wrath, honed to allow for an archer’s precision. But the goblins had chosen their attack vectors well, and were occluded by the thick wood.

The elder monkey goblin growled a challenge and drew his pitted bone blade before bandy-leggedly ambling across the fallen tree to meet Kai in melee combat. He chose his path carefully, out of direct line of fire from the archers. But, the little velociraptor was right up in the primitive’s prognathous grill in a blink—raking with her foot talons and digging her teeth into goblin meat.

After a good shot struck down one of the monkey goblin braves, Kishtari focused her attention on the critically wounded goblin elder. Shards of crystal manifested in the air before her, as if she shattered a pane of stained glass with the force of a ram. The shards pincushioned the elder goblin whose standing remains then liquefied into acidic goo! 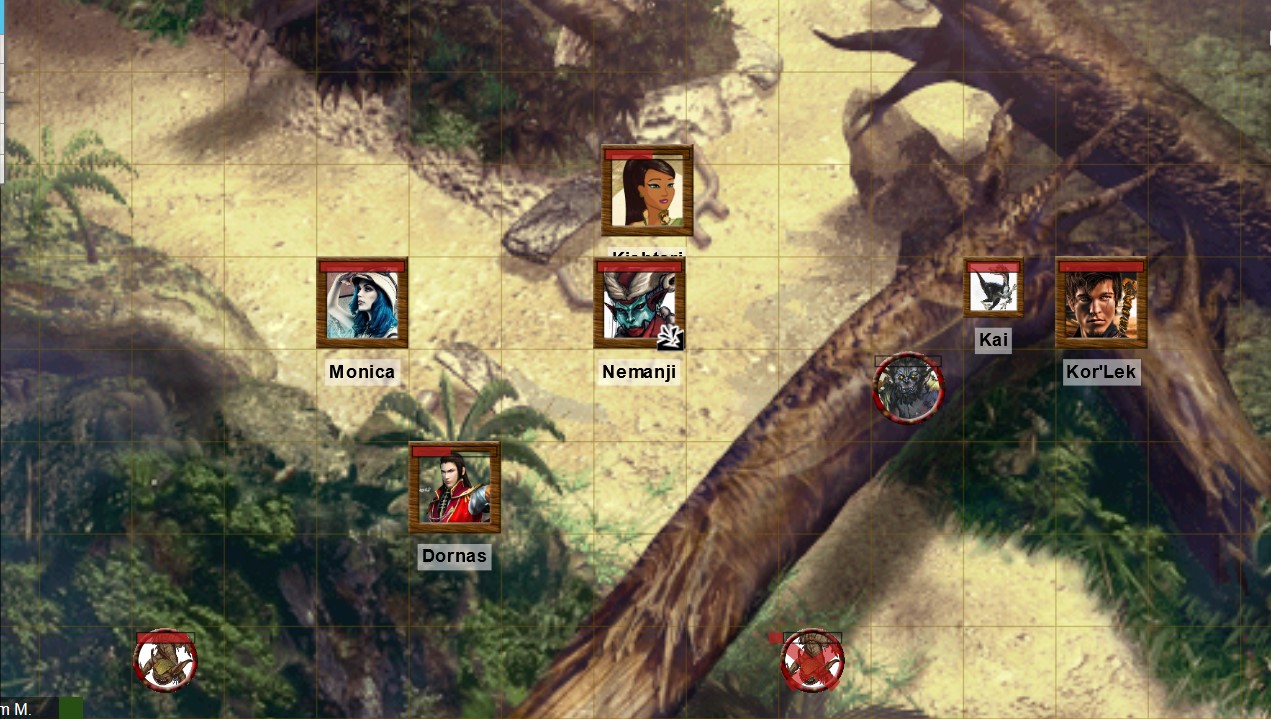 The last goblin said “dhon den!1” and hightailed it through the canopy.

The heroes turned south, and began an arduous ascent up a overgrown slope that turned into a nearly sheer climb. This time, the group’s teamwork came together nicely and their combination of skills allowed them to overcome the challenge successfully. At about 100 feet, the group found a fairly wide ledge path. Traveling west along it’s length, the sea was all that was visible on their left while the mainland remained hidden behind the rise.

The sound of angry goblin voices halted the party’s egress. Kishtari then revealed her companion Naga for the first time. The psionically-crafted being resembled a tiny serpent, but was made of crystal. The construct slithered off, telepathically relaying to the kalashtar everything it sensed. After reaching the vicinity of the goblins, it reported that there were many, most injured, one dead, with two heatedly arguing among themselves.

An intense debate erupted among the quintet. Nemanji and Kishtari thought it was sensible to attack the goblins while they were weak—they were injured, out in the open, and their kind already demonstrated hostility. Better to be rid of them before they could pose a threat down the line. Monica and Kor’lec were totally against attacking, and rather disturbed that their fellow adventurers were so bloodthirsty. Kor’lec argued vehemently that they, meaning the castaways, were the intruders here. Dornas cast the deciding vote in the objectors’ favor when he made it clear he was disinclined toward unnecessary violence.

The matter was decided, but the argument underpinned what could easily become a rift in the adventurers’ ranks. Kish thought her old friend Kor’lec might be too soft to do what was necessary, while the druid mused that he might have been better off not getting involved with the group at all. Nemanji thought the peaceful ways of his urbane companions crazy, and demonstrated such when the group noticed they, in turn, were clearly being spied on. Before the tiefling’s arrow turned it into a blue stain on the rocky cliff face, their observer appeared to be an arachnid of some kind; a cobalt-colored cross between a spider and a termite about the size of a housecat. The party had been made, and in a compromising position, but by whom this time, or what? 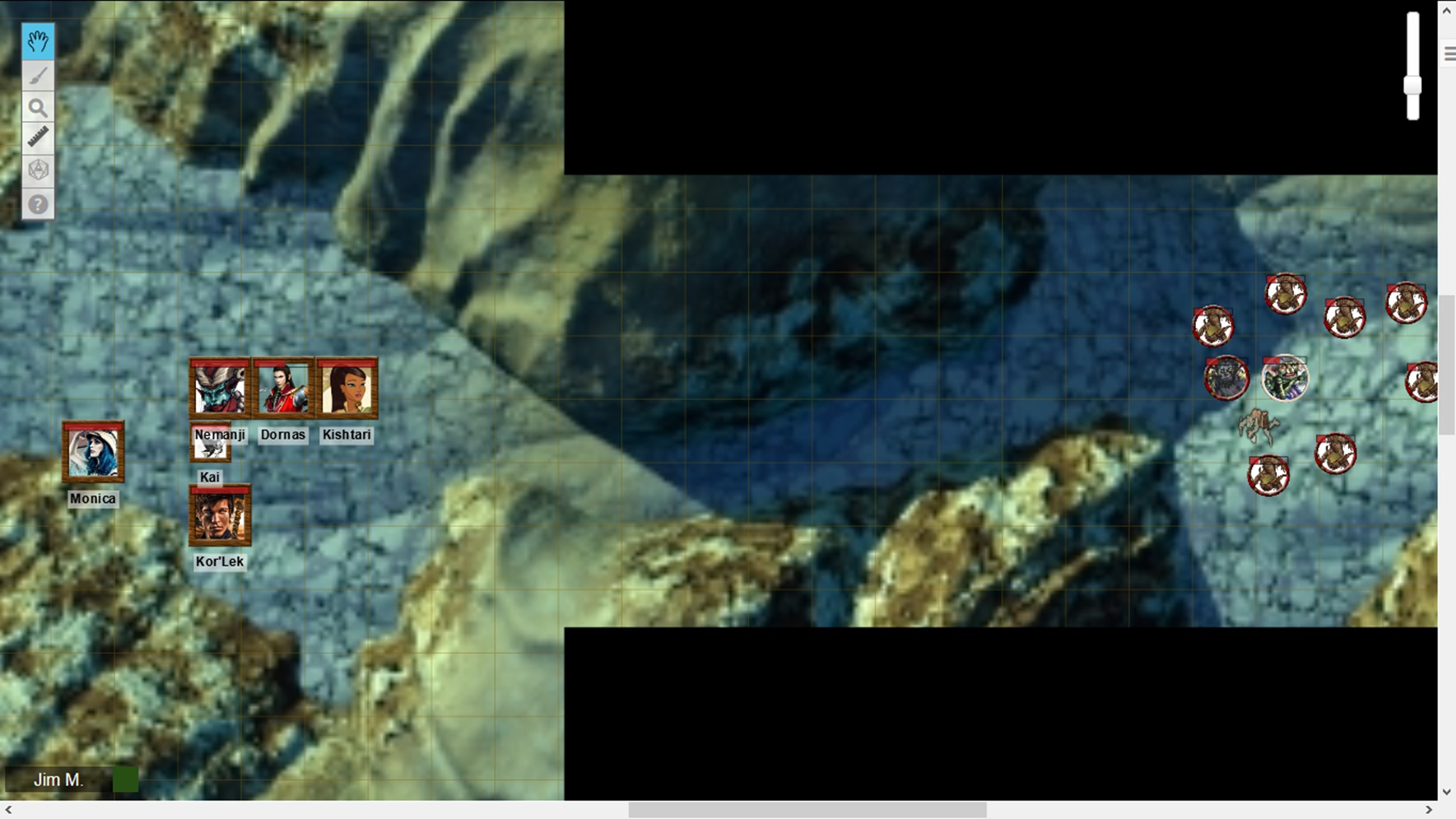 Hey, I love me them Monkey Goblins!
I’d also love to own a “Gorilla-faced Tribal Death Mask”. Who wouldn’t?

The goblins are one of my many many deviations from the original adventure path. And I even had to futz with them, too — as they age and get more grizzled, they start to resemble the forestkith goblins from Forgotten Realms. I like Paizo’s kawaii goblins but wanted to make a distinction when the PCs were facing something a little more formidable.

I worked out the mask with Wyatt/Nemanji. I searched Pinterest for an hour before finding the PERFECT pic to represent it. I think it’s beautiful! Right now it gives a climb speed. No big whoop, but what wound up happening was that we worked out that Nemanji would have used his climb speed to easily get aboard the Jenivere for his sudden appearance (because he missed the last week’s session). The problem occurred to us later that he wouldn’t have had the mask because the entire point of the mission was to retrieve their gear. Wound up being a “wizards did it” moment—but I just roll with that kind of thing.

It’s entirely possible that I f’d up too and either missed or forgot about it—in any case, I had a small note about it. Retcon!

Thanks for the insights.