A tale of the castaways, here for a long, long time 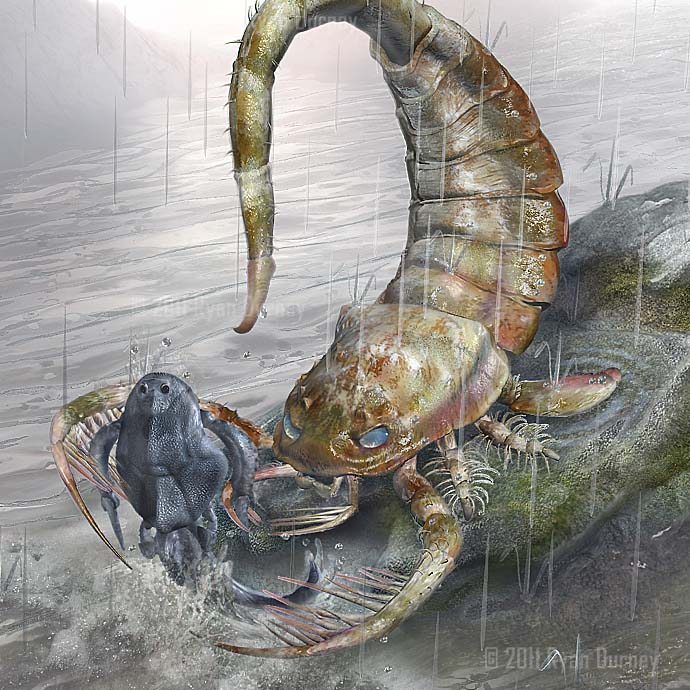 Dornas was the first to regain consciousness on a bright sandy beach with jumbled memories of how he got there, an angry beehive in his stomach and a throbbing head. Strewn about the beach were most of his fellow passengers aboard the Jenivere. A pinch in his feet awakened him to action, as several dog-sized sea scorpions tried to decide whether or not the bounty of meat they’d been presented with this morning was safe to have for breakfast. Dornas shrugged off the eurypterid’s venom… was the magus’s self-honed poison tolerance to thank for his timely awakening?

Realizing he was unarmed, the Taldan prodded awake the nearest body to him while backing away from the chittering vermin. This was his young countrywoman Monica Montana, who awoke with a start and shouted “Bugs!” Both Taldans realized that the nearby banyan tree presented some weaponry in the form of fallen branches and they quickly scooped up some promising clubs. Dornas also took note of the footprints and furrows leading to and from the water, and a deeper rut near the waterline that probably came from a rowboat. On the far side of the bay, he spied the Jenivere listing to port, the galleon scuttled and holed on some jagged rocks.

The next to awaken happened to be Kishtari, who realized that her mind-effecting powers would not work on the primitive arthropods. She tried hitting one with a crystal missile manifested from her mind, but missed. She wisely woke the hulking tiefling Nemanji who responded reasonably to the unexpected state of affairs by going ape-shit, erupting into a rage as if possessed by terrible Angazhan himself.

The demon-spawn hauled out a tree-trunk hunk of driftwood half-buried in the sand and brought it down toward the poisonous creepy-crawlies with an earthshaking smash—only to miss! Inspired to violence herself, Monica charged the menacing shellfish with a stick and—shouting “bugs! bugs! bugs!”—splattered one to bisque.

Dornas and Kish then took on the chore of waking the others, seeing that Gelik, Aerys, Sasha, and a manacled Jask were likewise unconscious heaps across the beach. Aerys awoke shaken and nauseous, but blasé enough to grumble “bloody hells, another shipwreck.” She then grabbed an empty bottle littering the beach, saw it contained no hooch, and threw it down in disgust.

Sasha freaked out, realized her blouse was in tatters and quickly turned her exposed back away from the others while demanding to be returned to her bunk. Gelik, citing his superior gnomish immune system, seemed to have the clearest memory of getting ill and falling unconscious at dinner. Old Jask was just happy to be outside, probably used to being shuffled around against his will and waking up in strange places. Dornas warned the convict to take cover in the foliage while the magus deftly leapt back into the fray to dispatch a eurypterid.

After another was smooshed beneath Nemanji’s comically large cudgel, the remaining killer crustaceans fled to the water, allowing the castaways to take stock of their situation. Most agreed that their dinner was tampered with. They found the half-elf Kor’lec curled up in a ball on the other side of the tree, deliriously murmering “Kai… Kai…” either still sick from the tainted food or suffering from some other ailment.

Monica, like some kind of human almanac, immediately deduced that they were on Smuggler’s Shiv, 40 miles from the mainland, and rattled off what she knew of the place—that it’s a shipwreck graveyard and believed by most to be haunted. She also speculated that the ship was deliberately scuttled on the Shiv—that there must be something on the isle worth a considerable measure of sabotage—but none could guess what that might be, who could be responsible, or why they alone out of the many officers and crewman survived.

Nearly everyone agreed that whatever crimes Jask was guilty of didn’t matter in their situation. Unfortunately, the tempered steel of the manacles binding the Garundi man’s hands and feet proved impossible for even the gorilla-armed Nemanji to break, and its locking mechanism just beyond Monica’s lock-picking skills even with utmost concentration. Meanwhile, a slowly calming Sasha began to lash together a makeshift cloak from drying palm fronds.

While Monica was curious to start exploring the forested interior, Dornas shrewdly observed that none of them were going to last long without food and weapons. He suggested that if there was anything that could be salvaged from the wreck of the Jenivere, they better get moving. The waves hitting the remains of the once-mighty galleon looked all-too eager to pull her into Besmara’s Chest.