Under the wide and starry sky,
Dig the grave and let me lie.
Glad did I live and gladly die,
And I laid me down with a will.
This be the verse you grave for me:
Here he lies where he longed to be;
Home is the sailor,
home from sea,
And the hunter home from the hill.

Upon the deck of the Brine Demon, more undead awaited our intrepid castaways. These skeletons, however, were no mere cannon fodder! Brandishing rapiers with a wary approach peculiar for mindless undead, four more skeletons rushed the heroes, nimbly leaping across the uneven stones and whorls of the shoreline. As they did so, two more skeletal pirates remained on the upper deck of the wreck, firing their stonebows wildly at the living.

Dornas, still balanced on the brink of a raised outcropping, suffered an unlucky slip that caused him to fall fifteen feet to the rocky beach. His teammates cringed when they saw that his leg was badly fractured—twisted into odd angles and perforated with shattered bone. Monica was immediately at her friend’s side with a curative spell, while Kor’lec checked the condition of the broken leg. While the archeologist was able to mend Dornas’s flesh and stop the bleeding, the bones were a mess. Stable, but mercifully passed-out from pain, the magus would be of no help this fight, save as a temporary obstruction to incoming missiles from the skeletons’ bows.

Unnervingly balanced upon the Demon’s cracked and listing mast, visible through the billowing sun-bleached sails, was the leader of the undead band. Draped in a drenched, festooned naval longcoat and skull-embossed tricorn, the heroes assumed this “captain” was Avret Kinkarian (barely) in the flesh. The creature gave new meaning to the term “unquiet dead” and seemed to take great delight in ordering his skeleton crew, his gravelly voice boomed with insults and threats that echoed even above the crash of the surf. Monica was quick to point out to her partners that the pirate was an intelligent and formidable type of undead: a draugr. Whatever the sludge-dripping being was, he recklessly blasted a double-barreled pistol in the general direction of the party, lambasting the “landlubbers” all the while. 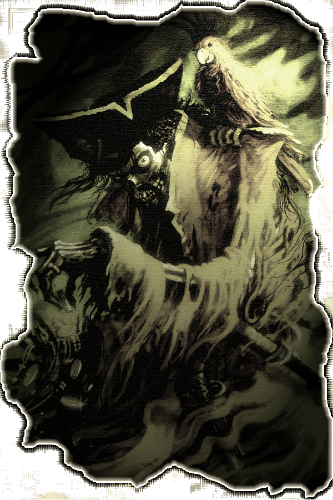 “I want to shoot you so bad my dick’s hard!” rejoined an uncharacteristically vulgar Monica after a discharge from her pistol blew up a skeleton’s skull. Soon the rest of the Castaways were hollering crude insults at the noisome draugr in between whacks and weaves.

The heroes found their opponents much tougher to dispatch than the first patrol. Armored, quick, and resistant to piercing weapons such as Kishtari‘s crystal shards or Nemanji’s arrows, the skeletons slowed the Castaways’ progress toward the Demon. Aside from the skeletal swashbucklers, a hundred feet of slippery shoals stood between the adventurers and the ship. Projectiles back and forth went astray in the updraft, but that didn’t stop the undead on the Demon’s deck from firing away. Though the draugr shouted orders to concentrate their fire, the mindless skeletons shot at whomever. Nemanji reminded everyone “boat no good” before switching tactics, jumping down to the shore swinging his super-sized club. Like a gorilla playing some morbid game of billets, the demon-spawn made a game of batting his opponent’s chattering skulls out to sea. Kai was likewise eager to sink her fangs into her foes, tearing ribs to splinters and crunching skulls in her powerful jaws. When Monica’s whip-play swept a skeletal pirate off its feet, the little dinosaur was right on top of it in an instant, chomping and tearing.

Sick of his crew’s inability to halt the intruders’ onslaught, the loud-mouthed draugr called for support. Immediately, a hatch opened in the aft of the ship’s deck and out popped three more skeletons! These were swathed in petty officers’ garb over their corroded mail, better armed, and possessed flickering red eyes rather than the dull gray of their mindless subordinates. One of the dread skeletons joined the snipers, the other two skipped down the broken mast to support the footmen on the shore.

The Castaways were a juggernaut. Though their fleshless foes deftly danced around the heroes’ attacks, when finally struck once or twice the undead collapsed like sand castles. Despite their sentience, the skeletal officers were barely more effective than the mindless pirates, and not nearly as hardy. Sick of the commander’s bellowing, Kor’lec attempted to summon an eagle to knock him off the mast. Though the first attempt fizzled when a lucky bullet from the Demon’s deck struck the druid’s shoulder, a second casting shaped the avian ally he needed. The eagle soared like a kite, catching an updraft and diving strait down toward the draugr’s face. Yet, the draugr’s balance was uncanny. Though the draugr kept his footing, the distraction allowed Kai to ascend the tipped mast and scamper strait toward him. Kor’lec followed closely behind while his allies finished off the skeletons on the shoals. Desperately fending off the eagle, the draugr was neutralized for precious seconds trying to holster his gun so he could draw his great axe instead. 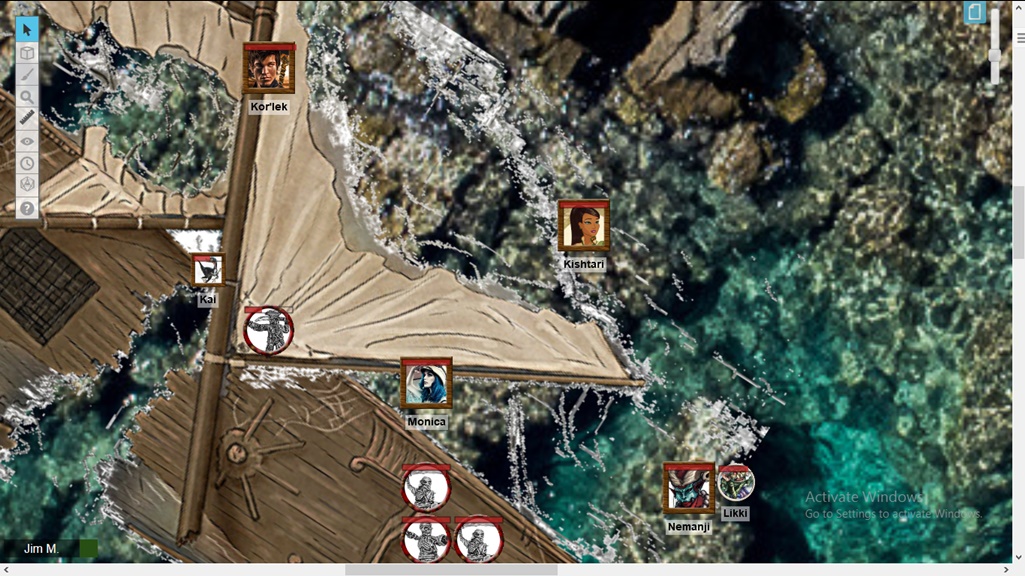 The eagle vanished just in time for Kai to launch herself at the beleaguered buccaneer, her flying foot claws aimed at the undead like throwing knives. What little flesh the monster had was ripped off in rotten chunks, forcing his withdrawal. After jumping down from the mast to the deck, the draugr’s ribs and hip exploded in a shrapnel of bone, fire, and lead. He turned to see the source of the wound. Monica Montana stood atop a cliff outcrop even with the Demon’s deck, her smoking pistol clutched in hand; and just as she avowed, a phantom throbbing in her nethers.

But the immediate threat was in front of him, as Kor’lec and Kai advanced toward the draugr like prowling predators. Amid accusations of cowardice yelled by the Castaways, the undead monster ducked behind his three remaining crewmates and tried to take cover. Turning to face his the druid and his companion, the vociferous corpse shut up and looked down to see an arrow emerge from the remains of his chest. Nemanji’s second arrow sent the befuddled creature hurdling to the sloop’s railing, and to silent oblivion… Kor’lec replaced the tricorn he covered from Ieana‘s camp with the fancier one pilfered from his fallen foe. "I’m the captain now!"

After swabbing the deck of their remaining enemies, the Castaways searched the vessel and found the aft captain’s cabin relatively dry and intact. There, the hook-handed and peg-legged remains of the real Captain Avret Kinkarian were located. The bones were mercifully inanimate, slumped over a desk with a skeletal hand atop an ornate iron lockbox. The desk and box contained paperwork vindicating Jask Derindi, and proved the Brine Demon was in collusion with corrupt Sargavan officials to skim from the protection monies the colony paid the Shackles.

The continuing story of Kinkarian’s crimes was revealed in the records. The brazen pirate betrayed the Sargavans and his own superiors in the Shackles to keep an entire payoff for himself: a fortune in coins and gems. His perfidy was soon discovered, though, and in a desperate gambit, tried to evade his pursuers by sailing the Demon around the Shiv. The ploy failed, the treacherous reefs bit and tore at the lower decks like a starving barracuda. As the sinking sloop was swept toward the rocks, the crew, led by First Mate “Loudly” Langstrom, mutinied.

The victorious heroes soon located the treasure in question while they considered moving their camp to the sundered wreck. That booty was tremendous, but a prize complicated by it being stolen from two major governments, and, of course, the fact that they were on a desert island with a conspicuous lack of shops.

Despite all the attention the treasure should have captured, the heroes found something in the lockbox that truly piqued their interest. The golden locket inside was a valuable trinket to be sure, but when opened revealed something truly mysterious: a striking portrait of Aerys Mavato!

There mite be a brine demon…..there mite not…..

It’s coming! I keep getting sidetracked screwing around with the section backgrounds. I wanted to make my own rather than crib Basilius’ any more. It took me a while to make something that I liked and tiled properly.

LOL! No worries! That MONICA sure has a foul mouth!