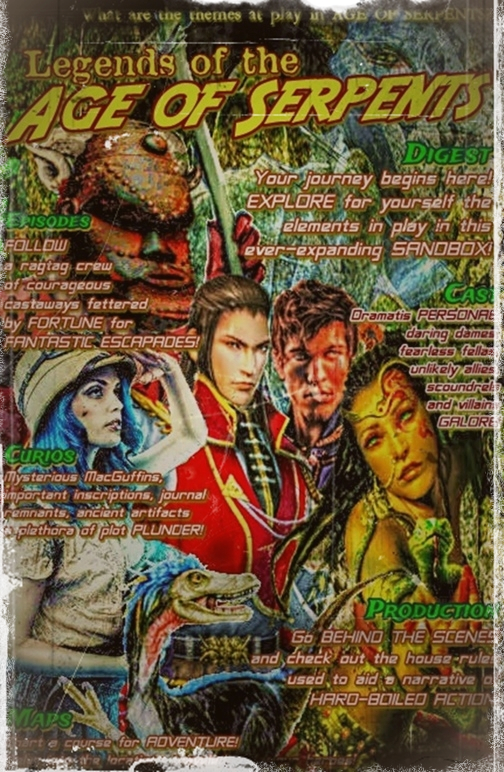 Before the rise of Azlant, before the coming of the Starstone and the salvation of man from the children of the cold-hearted, shifting Lord of Coiling-Poison, before the continents we know had taken shape, when the mountains and waters had names long forgotten, the Masters ruled interstellar empires outside the wildest imaginings of humble, frail humanity.

In the dark below the earth, they sleep in dreamless holds. Waiting.

They were once the undisputed masters of Golarion… and in the coming of unknown epochs, they may rule again.

The Serpent’s Skull, and Other Tales of Two-Fisted Adventure!

Influenced by early 20th-Century adventure pulps, jungle flicks and serials from Hollywood’s golden age, and the gory green hell cinema of the late 70’s, AGE OF SERPENTS is a Pathfinder Roleplaying Game campaign utilizing material from the published Paizo path “Serpent’s Skull.” One might say that it is Serpent’s Skull, AND BEYOND!

Players will be trailblazing through primeval forests, raiding hidden temples, discovering lost cities, and contending with savage tribes. While there is an “overplot” involving an ancient evil that the PCs become entangled in, much of Age of Serpents entails free-form exploration. The escapades of the characters — what locations they explore, how they approach challenges, who ends up as allies or enemies — are largely in the player’s hands.

Thanks! I’m getting better and better with Gimp. Glad you like the campaign, I have a great group and this is the best thing I’ve ever run!

This is a really awesome campaign….
Your CotM link is the most unique I have ever seen…

Thank you very much! It feels pretty damn good. We’ve had some great games lately!

cgregory was right! Well done to you and your crew on winning CoTM September. Great interview as well. I always love the opportunity to get to know the characters behind the scenes of these fantastic campaigns, especially those filled with MITE puns.

But seriously, it is a worthy accolade and I look forward to reading more in the future.

Thanks. I have a feeling, cgregory, you’ll know how awesome this feels very soon. ;)

Congrats to all of you on becoming COTM. Well deserved.

We used to use MapTool in a similar way, it was quite easy to just drag and drop maps in or even create your own maps. If i remember correctly the MapTool forums had a links to a large number of player created maps (some based on old modules), you might find some of them to be of interest for roll20.

Glad you are enjoying it! I use Roll20, actually—it is so easy just to drag and drop maps from modules, or overhead images from video games, and then decorate with terrain and chotchkies you can buy cheap or find free.
We play in person, and I project the player view on my living room TV while I have the DM view on my laptop. Saves the table for important stuff like booze and pizza. :)

Oh yeah! I also use an extra mouse, wireless for the players to pass around, and a program called TeamPlayer so we can have two cursors, one on their screen, one on mine.

Looks great Jim! Some fun reading on the adventure logs. Are you using RPTools MapTool for your table? Some of the images in your adventure logs remind me of that software.

Just finally got the chance to look back in on this, and I Love the design! The whole thing screams “pulp jungle adventure!” which is fantastic, and the write ups are vibrant! Well done, Sir.

You sure did, you “all round swell bloke”, you!

Took your advice Twig and updated the profile.

Thank you very much for your kind words.
I never thought anyone would really be interested in who I am outside of my work here, but I’ll consider putting something more in that profile.
I’m very glad you enjoy the campaign!

Nice looking campaign – great stylization and use of pictures and links throuhout. It would be good if you filled in something on your personal profile, so those looking in have an idea of “who you are” and “where you are coming from”, but overall, I am very interested and look forward to seeing more adventure as it evolves.